THE FORCE AWAKENS finally late Thursday night, December 17, 2015 and the Disney era of the STAR WARS phenomenon officially begins.  I find it so fascinating in my late 40s to watch the clamor build toward this film premiere because I have strong memories of the original and all that followed.  My interest lays equally in my desire to see where the story goes and my rubber-necking the global crowd chorus surrounding this monumental debut. 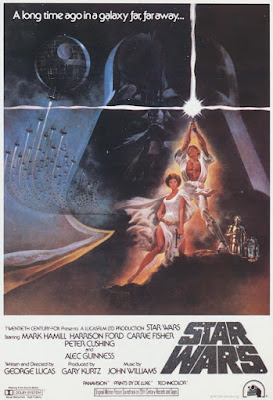 In law school we were taught that it was axiomatic that eyewitness testimony is the least reliable evidence.  Why is that?  Our memories are fickle and easily malleable and, thus, highly inaccurate without other objective evidence to support it.  An example relating to my point might be the nice gentleman who worked the check-out counter at a local Taco Bell just two days ago.  He noticed my son’s STAR WARS t-shirt and this triggered him to start up a conversation with me about the “new” STAR WARS movie coming out this week.  And while I talked to him he regaled me with his memories of people camped out at the theater waiting to buy their tickets back in 1977.  I was polite and just laughed about it with him but inside I was thinking back on that original opening weekend and, while I can’t say with absolute assuredness that he did not experience that, I strongly suspect he is conflating memories of the craziness surrounding the prequels with his memories of the original trilogy.  Even in 1977 terms, an opening weekend of $1.5 million, which was good, was not the sort of opening gross that supports the notion that people were camping out en masse for a movie that (1) they had little prior knowledge, and (2) was not even conceived of as a franchise or larger universe yet.  I mention this because the phenomenon that STAR WARS has become is widely based not on the films or the characters themselves but rather the “feelings” we associate with them.  STAR WARS is a phenomenon mostly because we associate, and recapture just a smidgeon of, a moment from our childhood where anything was possible and life was without the crushing weight of adult responsibility.  The fairy tale of our childhood nostalgia becomes connected to this fairy tale set in outer space and how it captured our collective imaginations and held onto it.  And like all fairy tales, they evolve and sometimes lose touch with the original version over time in the retelling.

There are plenty of resources out there that can recount in minute detail every step of the production of the original STAR WARS and the succeeding films, cartoons, novels, and…yes, one stupefyingly horrible television holiday special.  I want to focus specifically on my memories, as best and as accurately as I can be at this point, of the original STAR WARS.  I will leave it to others to discuss the colossal impact of THE EMPIRE STRIKES BACK and how that last-minute second-draft exclusion of Luke’s father and inclusion of a new revelation about his father is the “Big Bang” moment where the phenomenon of the STAR WARS universe actually began.  I want to focus on this stand-alone movie that cookbooked itself along the structural path of Joseph Campbell’s “Hero’s Journey” monomyth and was a nostalgic attempt itself by George Lucas to capture the feelings he had as a child watching FLASH GORDON serials at the movie theater.  He wanted to reproduce that feeling for modern children.  It was also his attempt at upgrading science-fiction adventure film effects to a degree never seen before.  And maybe more than anything else, Lucas recognized the importance of sound in the experience than anyone before him.  Those of us who do have visceral memories of sitting down to see STAR WARS in the theater for the very first time will understand.  From the bombastic John Williams score to the rumble of a seemingly endless giant space ship coming into view for the first time to Darth Vader’s wheezing and threatening voice to the hum of the light sabers and the “pew-pew” of the laser blasters (something that has now replaced “bang-bang” in the childhood playground lexicon).  Lucas created more than just a movie, he created an experience—and with EMPIRE he gave birth to a phenomenon that has grown to maturity and moved on without him.  And by all accounts—if the current 9.5 out of 10 rating on IMDB is any indication—has surpassed him with the advent of THE FORCE AWAKENS.

Read more »
Posted by Keith Howell at 8:08 PM No comments: