As an ongoing series of blogposts, this will quite simply be, new reviews of a contemporary comic book (or series) created in a style meant to evoke a simpler, and less corporate, time in the world of comics publishing.  In more fan-friendly language, these are modern comics created today that attempt to recapture the feeling of comics from what we know as the Bronze, Silver, and Golden age of comics.

In 2005, DC Comics was in the midst of another corporate flog at the teat of the CRISIS cow with INFINITE CRISIS and all the cross-over marketing.  That same year Marvel Comics was doing the same with their ever-reliable X-Men-related books with a corporate cross-over event called HOUSE OF M.  Marvel also rebranded post-bankruptcy as Marvel Entertainment with an intention to produce their own theatrical films based on the comics properties they retained film licenses to and entered into a partnership with Paramount Pictures to co-finance and distribute the films.  And in 2005, Image Comics still occasionally, but irregularly, published Big Bang Comics.  That year Big Bang published a comic titled ROUND TABLE OF AMERICA: PERSONALITY CRISIS #1 and I positively reviewed it as part of the Talkback League of A$$Holes Comics Reviews.  Rather than link to the legacy site, I've included that review after my current review.  I refer you to that earlier review because it relates to the current comic I'm reviewing in a couple of ways:  PERSONALITY CRISIS was a solid bronze-age style comic written by Pedro Angosto and the new comic I'm reviewing is also written by Pedro Angosto.  Let us see how the 16 years have treated Angosto and his writing!

Big Bang Comics, a creator-owned imprint overseen and edited by Gary S. Carlson, first saw life through the small press company Caliber Press, then for a number of years Image published the imprint.  And most recently Big Bang Comics publish their own imprint through IndyPlanet.  The conceit and the charm of the Big Bang Universe is that even though it did not exist until 1994, it exploded into existence with an entire fictional publishing history dating back to the 1940s.  Within this history, the vast pantheon of characters and heroes exist within a framework of style that evokes the real comics artists of the past as well as style and design of DC comics and Marvel comics.  This melding of these various art and storytelling styles have resulted in 37 years now in which the Big Bang Universe has evolved into something much more than pastiches of Marvel and DC characters.  The Big Bang Universe has become its own thing.  If the entire history of super-hero comics as experienced through those of each era who were reading them at the time were Excalibur, Big Bang Comics is young Arthur, the last to pull the sword from that stone and lead the way for this modern insurgency of retro-comics independent publishing made possible by modern digital technology.

In BIG BANG ADVENTURES #8, writer Pedro Angosto and artist Pablo Alcalde do an amazing job capturing the feel of the 70s era of the Silver Age telling a story of Earth B's KNIGHTS OF JUSTICE, the team of heroes formed in the Golden Age of the 1940s.  The roll call of heroes includes Dr. Weird (a Spectre-like character who, weirdly enough, first appeared in real-life comics history in a fanzine where it was eventually drawn by a young Jim Starlin), (Green Lantern-esque) The Beacon, The Badge (sort of an amalgam of Capt. America and The Guardian), Venus (a tip of the hat to Wonder Woman), Thunder Girl (a nod to Mary Marvel), and other familiar seeming characters.

Set in 1947, post-WWII, an assault on the Lincoln Memorial in Washington D.C. by the Alliance of Evil results in the successful abduction of Venus where she is made prisoner of Pluto, the God of the Dead.  With Venus trapped in the Underworld, all love begins to vanish from Earth in dramatic fashion.  The Knights of Justice set off to rescue Venus from the Underworld.  Whether they succeed or not is for you to find out by reading the comic!

The writing is fun.  Angosto captures each character's voice in ways that evoke the simplicity of earlier comics, but within the context of deeper emotional connection than was common in those days.  This gives the comic a resonance that makes it feel relevant for today even when the setting and style is from a past era.  Angosto incorporates many elements of Roman mythology, and especially those unique aspects of the Underworld mythology as the Knights face individual external challenges but also internal challenges as well in their quest to save Venus.  As someone who spent a good portion of their childhood devouring books on the Greco-Roman myths, I enjoyed the hell out of Angosto's skill at incorporating the Knights into the many different aspects of those myths and telling a clear narrative with educational value and a moral point of view. 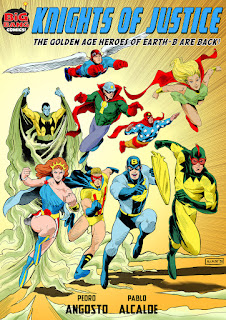 Pablo Alcalde was born to draw this type of story.  Because I'm a fan, I love to see those grand full-page action shots and Alcalde weaved in 9 of them plus a gorgeous double-page spread.  This is the advantage of Big Bang publishing their own comics these days—they are not bound to some pre-determined page count or frequency. As a result, we get an opportunity to read stories like this one where the artist has an opportunity to breathe and really tell the story in the best visual way.  Alcalde knows how to tell a story sequentially with just the right level of detail to keep everything clear and clean.  I want to see more from this artist!

Simon Loko is the color artist for this comic and I want to compliment his work at adapting modern digital coloring and modern advancing printing production to capture the feel of the coloring style of older comics.  The color art is not flat nor is it overly rendered, which creates a perfect blend of modern and retro.  Solid lettering work by Adam Pruett as well.  This is what artistic collaboration looks like!

To round out this comic, which I've already read 3 times, Angosto includes a text piece about how and why he returned to writing superhero comics and a pin-up section is included in the back with 11 contributions featuring various Big Bang Universe characters.

All-in-all, this is a pretty sweet 52-page comic book for $8.95 in print or $2.99 for a digital download.  Click HERE to order directly from IndyPlanet. 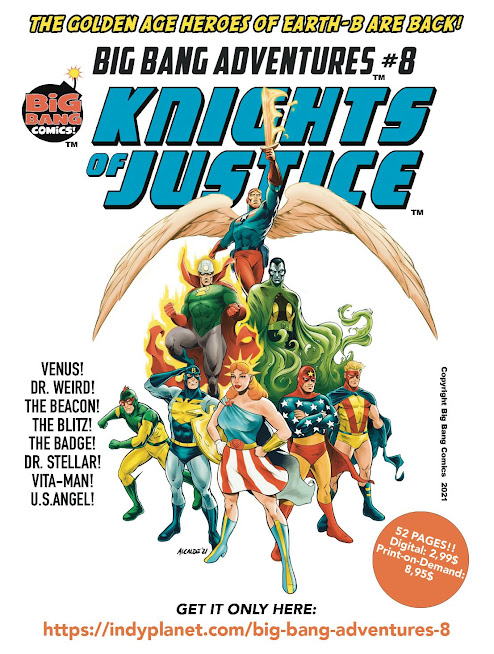