This column's reviews, although I hesitate to call them "reviews" simply because it is bit more gonzo than that, are going to hearken back to classic Bronze Age comics from Marvel and DC—I would say....circa early '80s.  The first column focused on the latest comic from Big Bang Comics, featuring the Knights of Justice, and I will be covering the newest Big Bang comic in this as well.  But before I get to that, there is a new upstart in the battle of the independent retro-comic book publishers.  I'm speaking of a new little company calling itself Sitcomics™ with the tagline: "It's TV you read!" Sitcomics is the brainchild of veteran sitcom writer Darin Henry and these are not "comic" books, instead they call them Binge Books™.

The Binge Book format seems to be conceived to appeal to modern binging sensibilities but also the aging generation who does not feel particularly good about the digitalization of comic books and wants something physical in their hands to read.  A Binge Book is printed, first of all.  The books are not made available, legally, in a digital format outside of the occasional free preview download (such as BLUE BARON #3 which you can preview digitally here).  This is an enormous 68 pages perfect-bound comic with glossy card stock covers and, notably, include a unique number on the back cover.  THE HEROES UNION give you your own "Member Number" and BLUE BARON gives you your "Battle Brigade Number" respectively.  The availability of these comics is strictly through comic book stores. They are not print-on-demand or available direct from the publisher.  These are legit limited print run comics that are specifically targeted to comic book readers through local comic book shops.  Whether this will, over time, enhance their collectibility I can't say.  But it does mean that you will have to let your local comic book shop know you're interested so they can stock it or you will need to order from a comic shop who lets you order online and be willing to pay shipping costs to get your hands on it.  Depending on your thirst for brand new old-school super-hero comics with some writing and art by old-school comics creators, you can choose your method.  Feeding into that old-school nostalgia, you will also note the cover designs that are busier action images, as opposed to the more modern pin-up style cover approach, along with top-left corner images and even an "Approved by the Comics Code Authority" stamp (which is pure nostalgia given that the CCA does not even exist to grant or decline the stamp anymore).

Overall, if that's your jam, I highly recommend seeking out some of Sitcomics' Binge Books.  For now, here's a few words about the two I made the effort to try out for you.

What better way to evoke early 80s Marvel Comics than to bring on one of best Marvel writers of that time period, the esteemed Roger Stern, to co-plot and script this first outing of The Heroes Union?  Well, you could pair Stern with artists Ron Frenz and Sal Buscema, both Marvel stalwarts from that same time period, is that the best you can do?  Apparently not, because Sitcomics also brought on longtime digital colorist Glenn Whitmore to give the whole thing a classic color vibe and Marvel and DC veteran inker Brett Breeding to ink Frenz on the cover. 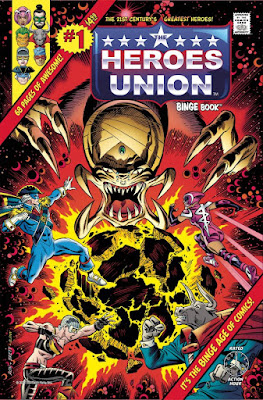 There's a lot to set up in this single issue, but thankfully, there's 68 pages so there's plenty of breathing room to pace the story accordingly.  Stern helps set up the Binge Universe (which is as good a name as I could come up with in the moment) by giving us hints and glimpses of a history here that can unfold over time in other stories and other titles, but for now he establishes for the reader what we need to know: Who, or What, Is The Heroes Union?  Clearly the Union is the Binge U's version of The Avengers.  Uniquely, while the characters who make up this newest incarnation of the Union legacy team may track with certain common tropes, none of them smack of being pure pastiche or homage to a specific Marvel character.  I think that is a great benefit to the comic and to the line of comics itself that they are carving out their own world of characters within a certain "style" of art and writing without copying or homaging specific characters or stories. 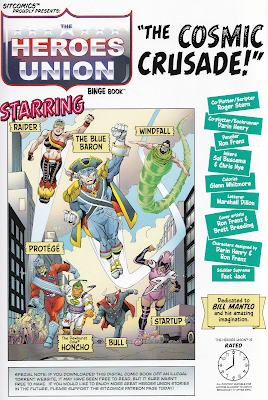 The story and art are well-done and consistent with the 80's feel they are going for but within a 21st century milieu.  That means there is a certain level of acceptable naivete in this world in which super-heroes exist, but without a need to examine the absurdity of that concept or a need to overcompensate by approaching it in a hyper-realistic fashion.  This is old-school comics, including the nearly non-existent these days, "thought balloons" that give us insight into characters' thoughts without the need for endless exposition in dialogue or caption.  I'm not saying it needs to be in every panel of a comic, but it is a tool that needs to be returned to the modern comic book writer's toolbox and Stern knows how to wield it.

In classic first issue fashion, the story begins with a young/new hero, for this one it is the character calling herself Startup, receiving the invitation to join a team.  So, her journey of discovery is the reader's journey as well.  It is a solid way to introduce the concept and the characters (see the inset image which is a splash page type image included on the inside cover as a sort-of roll call of the team members).  Very quickly, the action kicks in and the reader gets aliens, space ships, other planets, lots of action and intrigue.  Basically, its everything you wanted to get back in the day when you were buying comics like this off a spinner rack for 50 cents.  But maybe a bit better given the better quality of printing and paper stock and the freedom of creating their own continuity rather than writing within a larger continuity.  The last couple of pages provide the reader with a Who's Who type glossary of the characters for handy dandy reference and it looks like the space is intended going forward as a Letters Page/Binge Bulletins space. All I know is that it was fun to read and I think it's worth checking out.

Which brings us to the comic book teased at the end of THE HEROES UNION #1 . . . 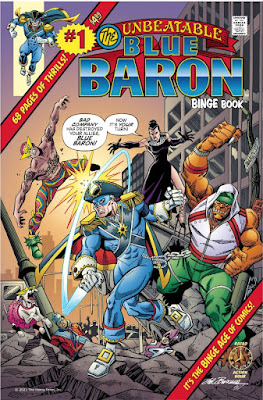 My second outing with a Binge Book was Blue Baron.  In brief, Blue Baron is pretty much a mashup of every patriotic super-hero with The Phantom in that Blue Baron appears to be immortal but he's really a generational identity passed down for 300 years from father to son to grandson.  For this one, creator Darin Henry takes on the full writing duties and demonstrates that his experience writing for television translates well to the comic book medium.  He is joined ably by 80s Marvel vets, Ron Frenz as penciller and Sal Buscema on inks.  So, visually, this comic looks like a classic Bronze Age Marvel book in all ways except that the characters are all-new.

This issue revolves around a common comedy trope in movies, tv, and yes, in comics.  But I have to say, I was pleasantly surprised by how it avoided a cliched resolution but rather uses it as a way to kick-off the series with a completely different status quo than expected.  Other than that, the comic is just a good rollicking adventure with lots of clever moments.  Highly recommended.

Read more »
Posted by Keith Howell at 7:14 PM No comments: