My annual "In Memoriam" for the AICN Comics section of Aintitcool. 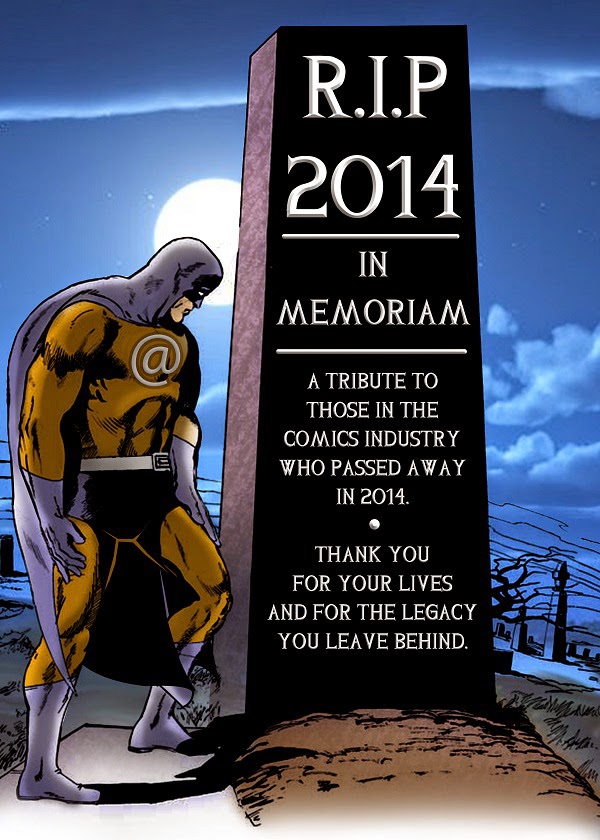 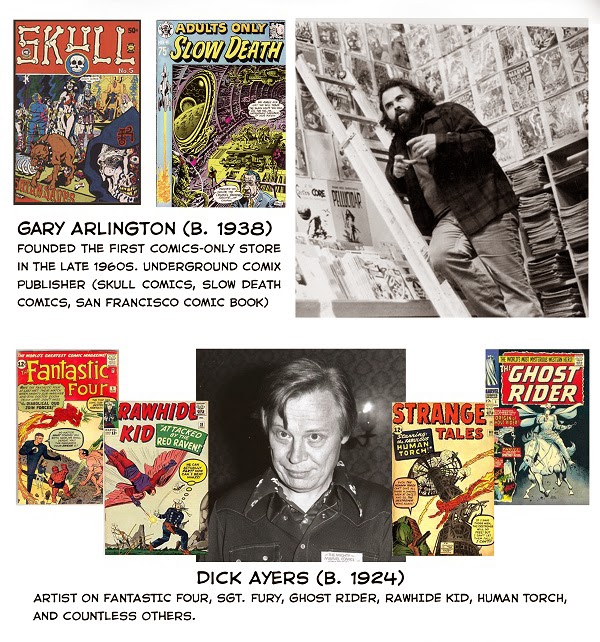 Posted by Keith Howell at 6:00 AM No comments:

FITTY SHADES O' CRAY-CRAY, or HOW BAD IS FIFTY SHADES....REALLY? 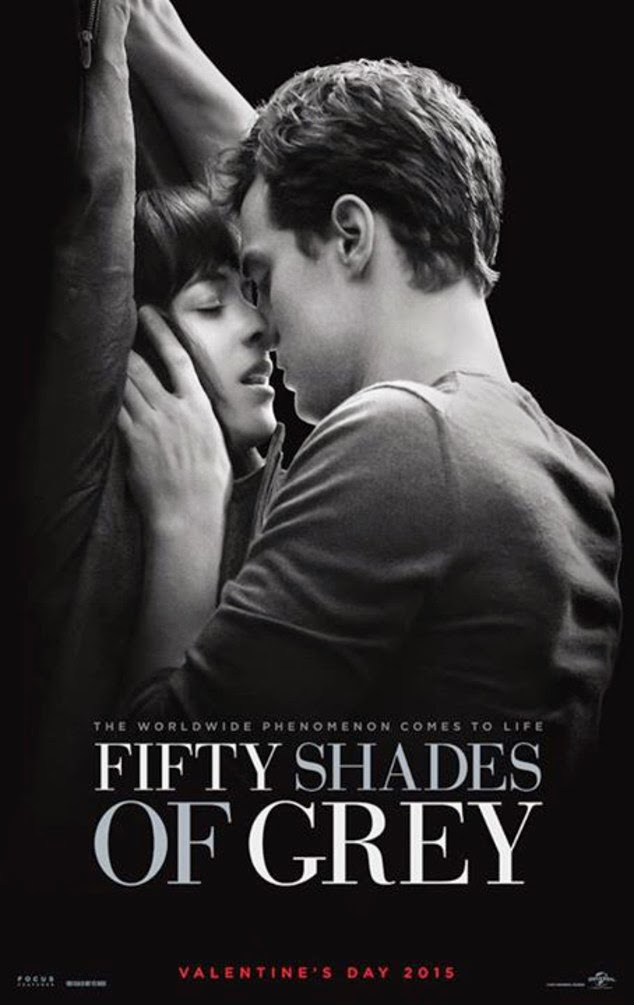 I never planned on seeing this movie and I most certainly was not planning to see it on Valentine's Day.  So, in the intervening couple of weeks since it premiered I have spent some time observing the reaction to the film and contemplating whether it was one of those awful movies that I should just bite the bullet and use my MoviePass to go see.  Of course, the danger is that I could walk in expecting the worst and end up with something like JUPITER ASCENDING which exceeded even that in its awfulness.  So I caved into my morbid curiosity and walked into a theater late last night to where I noted 4 other couples (kinky, I know) scattered strategically around the theater.  At this point in the rapidly collapsing attendance numbers, nobody was forced into sitting uncomfortably close to a stranger.

Oftentimes the first indicators of what I am about to endure in a theater is found in the movie trailers the powers-that-be have chosen to attach in front of the movie.  In this case, the ridiculously foul red band trailer for some upcoming Vince Vaughn movie and the regular trailer for TED 2.  That right there started lowering my expectations straight up. 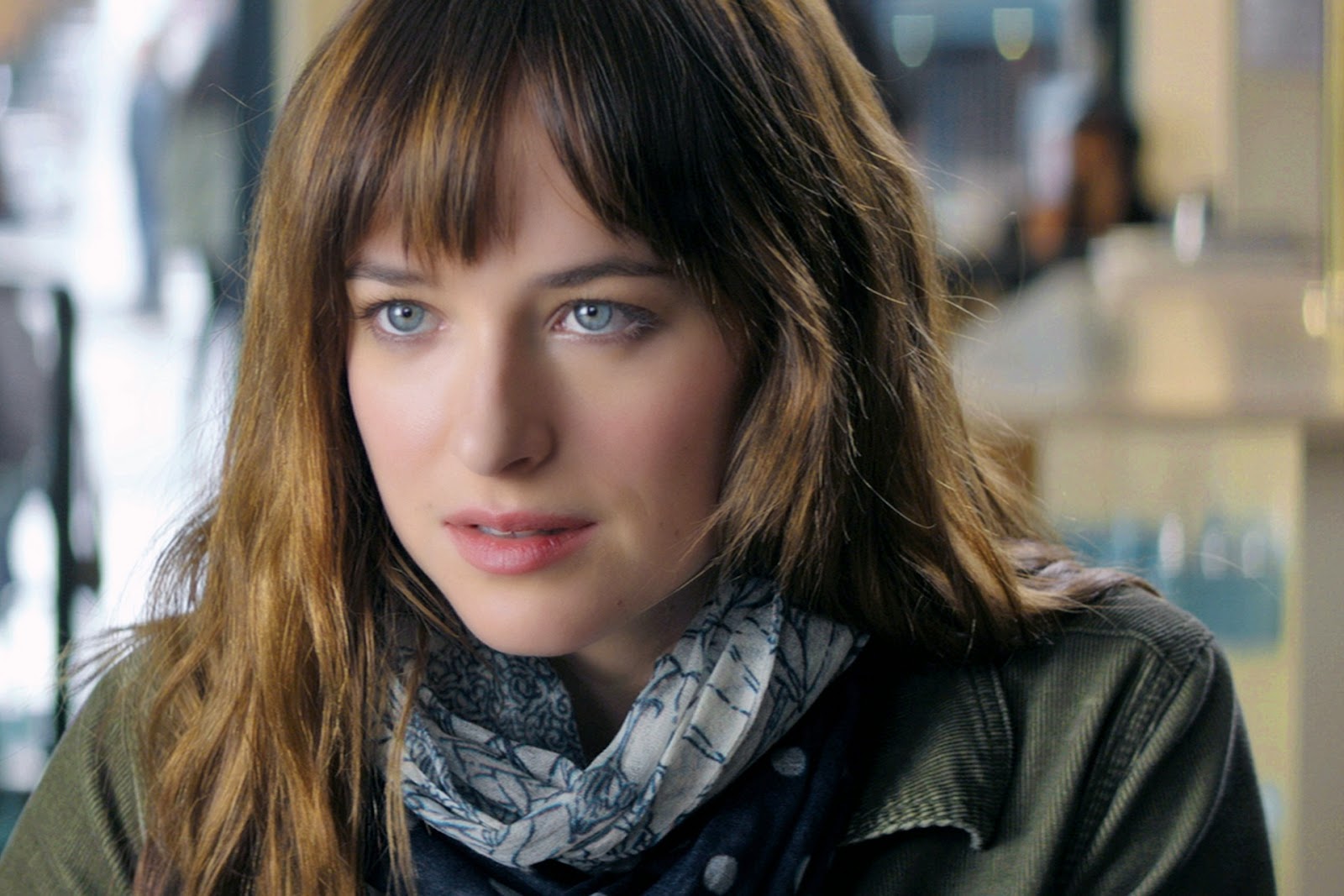 Then the movie started and lo and behold, it is essentially EXACTLY what I expected.  Two fairly good actors caught like scared gerbils in a situation they can't get away from fast enough but giving it their best effort to find something resembling quality.  I'll say this, Dakota Johnson surprisingly brings a level of reality to her ridiculously simplistic character with the "laugh-out-loud" name of "Anastasia Steele."  The mere fact that anyone can say that name out loud without laughing (or cringing) is an impressive example of acting talent.  Jamie Dornan, as "Christian Grey," on the other hand, is trying his best but is unfortunately saddled with lines that would make Roger Corman turn over in his grave (if Corman were dead).  The absolute worst was Grey roaring "I'M FIFTY SHADES OF FUCKED UP!!!!"  And yes, I snorted embarrassingly out loud at that moment. I actually laughed inappropriately a number of times.

The movie almost kind of works as a parody.  The problem is that it is parodying itself so it is schizophrenically serious but ridiculous at the same time.  There were only 4 or 5 sex scenes crammed in between listless boredom. And the sex scenes were sometimes titillating, but that's all.  I was more distracted by the strategic cutting of the camera to avoid giving the movie an NC-17 rating by showing actual genitalia or penetration.  There is none to be had here. You will see more vagina in the half-second flash by Sharon Stone in BASIC INSTINCT.  Other than relentless lingering shots of both actors' nipples and butts, the most you are going to see is quick-flash glimpses of their pubic hair.  I also took note of Dornan's face being positioned way too far away to actually be doing to her what she was acting like he was doing and also his butt being positioned way too high for actual penetration (unless he's built like Long Dong Silver).  So, in other words, their efforts at simulating these "hot" sexual experiences resulted instead in an erotic detachment.  The single sex scene between Jennifer Lopez and her boy-toy in the mostly forgettable THE BOY NEXT DOOR was more graphically erotic than all the sex scenes in this movie.  I would almost say the movie would have benefited by going ahead and pursuing the NC-17.  At least it would have more authentically embraced its source material rather than a nervous self-parody. 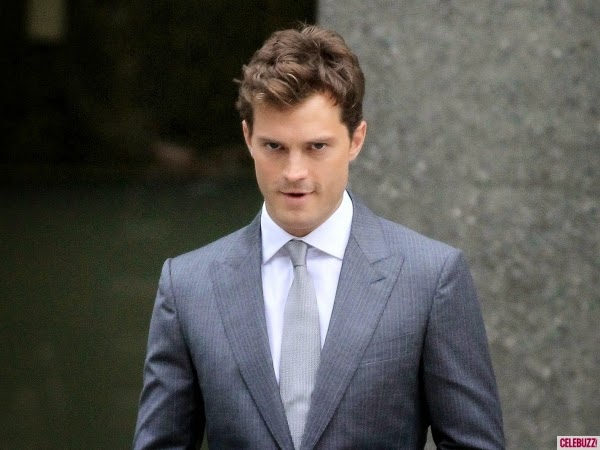 Ultimately, however, if we want to analyze the controversial nature of the film, it is less disturbing because of the sex and more because of the psychologically abusive relationship.  Christian Grey was the victim of sexual abuse by a trusted adult who seduced him when he was 15 and used him as her submissive sex slave until he was 21.  She turned him into a sociopath who craves nothing but dominance.  He feels nothing but anger and pain and derives pleasure from inflicting it.  In fact, near the end when he is whipping Anastasia with a belt, the camera keeps cutting back to the clothed Christian reacting absurdly like Rob Schneider's "Orgasm Guy" on Saturday Night Live.  None of this justifies Christian's psychological raping of the young Anastasia's mind.  By being the shy introverted bookworm's first sexual experience and her first boyfriend, like all sexual abusers, he is replicating his own abuse with her.  Only now, he is the victimizer.  He becomes obsessed with her, to be sure, but there is no emotional connection on his end and she, being so inexperienced and naive, begins to mistake her attraction to him for love -- which is what he wants.  When the sociopathic abuser can make his victim think she loves him, then he has achieved his goal. He has her caught in his web where he can now feed on her at his leisure and on his terms.  Even in the end when she rejects him, there is no sense that she is leaving for good.  He has her where he wants her.  He knows she will always return.  And, like a good sociopath, this is all he really wants. There is no give and take in the relationship because there is no real relationship.  She serves a purpose for him and him alone and he does not have any concern for pleasuring her -- except as a means to further attach her to him.  All of this, by the way, is contrary to any real understanding of BDSM as a lifestyle between committed couples.  In Grey's case, the BDSM is merely an intriguing tool of seduction so the emotional vampire can be satiated and he can convince himself that he is powerful and in control (as a reaction to the 6 years he was a powerless victim himself).

It's all quite preposterous that so much of his time could be spent in these endeavors all while achieving billionaire status by age 27 and barely be seen spending any time actually doing his job.  I never believed him in that role as opposed to Anastasia's role as shy college student with butchered bangs -- she was imminently believable.  And from a personal standpoint, after actually seeing this, it is pretty shocking to me that the fantasy of subjugation by a sociopathic abuser appears to be the preferred fantasy of so many women out there. It is so contrary to what I would desire for any woman I care about.  In the end, however, the film itself suffers from the worst sin possible -- it is dull and boring most of the time.  It was less than 2 hours but felt like 3 and that's pretty bad.  I think there was an approach here that could have been good, but it would have required a wholesale rewrite of the entire story so that we actually got real characters and not caricatures.  They chose to play it safe, however, so that the studio could be more confident of making a profit.  But artistically, this is a movie that thinks it is clever just to frame shots and sets with a lot of gray.  It would have benefited from a director with a real personal style and approach who could have given this movie a heightened reality sense -- brought us into another world that is more exciting than our own.  A better director could have made us feel the pleasure and taste the sensations so we would find ourselves in Anastasia's place and experiencing her attraction and revulsion.  Instead, we got lingering shots of boobs, butts, abs, and watery Christian Grey eyes with no sparkle and a smarmy boyish smirk.

FIFTY SHADES OF GREY is watchable but forgettable and not anything I can really recommend. 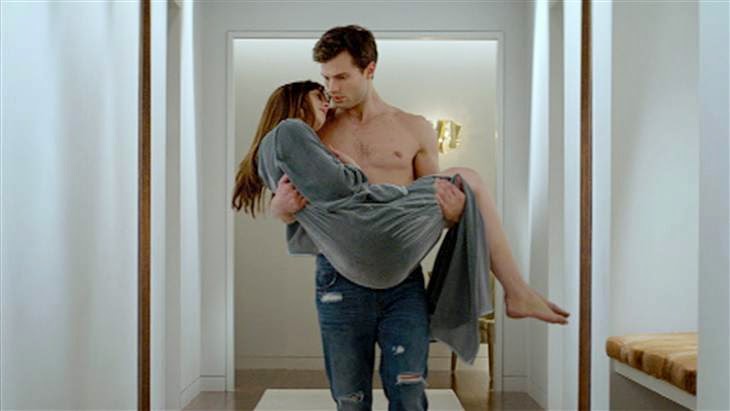 Posted by Keith Howell at 6:59 PM No comments: