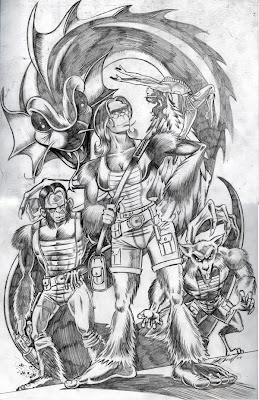 I make no pretense to being important enough to "blog" on any topic that might interest anyone else, but I'm feeling the need to write even if it is just for myself.

So, to get this blog up and running, I'm going to start what I hope will be a frequent topic and that is to post a graphic novel concept I've had percolating in my head for awhile.

MS. BIGFOOT & THE CRYPTIDS is, in my mind, an action-oriented, fun adventure story for juveniles to adults to enjoy that also teaches a little basic science and critical thinking.

This is the basic concept:

A team of freelance adventurers/monster hunters. funded and housed by a mysterious Dr. Mothman, whom they've never met of face-to-face before and, of course, has a hidden agenda/real reason for gathering this group together. Stated purpose is to go out and either disprove or attempt to recruit from new reports of Cryptid sightings.

MS. BIGFOOT
-- a female apelike creature from the upper northwest. Educated, feminine, and tough. The natural leader of the group.

SKUNK APE
-- a male, apelike creature from the deep South around the Carolinas. Uneducated, not too bright but very strong and agile, speaks with a drawl and an unfortunately pungent body odor.

OGOPOGO
-- a male bipedal creature from the Northeast with a reptilian/amphibious look to him. Can transform, though, into a full-on huge sea serpent/dragon form.

EL CHUPACABRA
-- a male bipedal creature from the lower southwest/mexican border with a canine look to him. Think of him as a Were-Coyote.

THUNDERBIRD
-- a female bipedal creature from the Midwest. Appears like a normal Native-American woman except for the colorful and huge feathered wings she sports.

An added visual possibility of the JERSEY DEVIL which is a winged horse creature. I could see that as a useful addition as well.

I haven't fleshed it out much beyond this basic info, but I could see this as a stand-alone story or an ongoing series of stories.
Posted by Keith Howell at 1:19 AM