LORD OF THE JUNGLE #1 (Tarzan) Reviewed 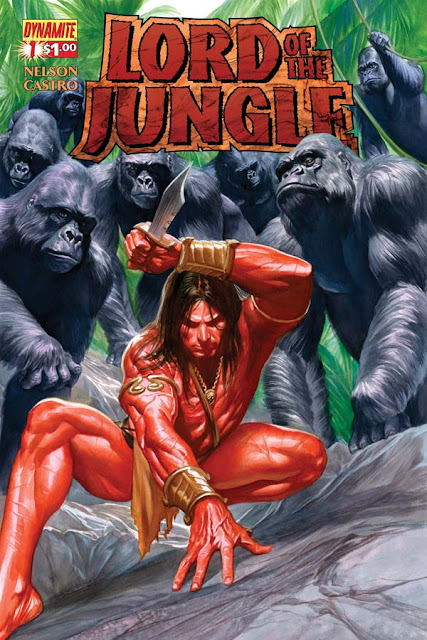 “Cowards! Scoundrels! How can you strand us here like this? After Lord Greystoke saved your life. How can you leave us here?” — Alice Clayton (Lady Greystoke)

Yes, dear readers, the “Lord of the Jungle” is Tarzan. If you don't know that then you should not even be allowed to read comic books anymore. Tarzan is also “Lord of the Apes”, “Lord of the Trees,” and “Lord Greystoke” (or more accurately “Viscount” but I won't go into that here. With the roar of a great bull ape, Tarzan comes to Dynamite with the LORD OF THE JUNGLE comic book. I come into this comic with the baggage of being a longtime reader of the Tarzan novels, comics, and viewer of the various films and TV series. It's a classic and archetypal feral man story with many different iterations and interpretations over the decades. My overall impression of the comic is positive.

As with many of Dynamite's series, the first issue has multiple variant covers, my copy is the Alex Ross cover. It's a dynamic cover design with a crouching Tarzan decked out in loin cloth, arm bands, wristbands, shoulder strap and wielding a knife. Behind him are a bunch of gorillas. The colors are a bit softer than I would expect, but it's still a nice cover. The “Lord of the Jungle” masthead is a strong design that looks carved from the wood of a tree.

I expected the comic to set out on its own path with a quick origin recap, so I was surprised to find the comic appears to be actually adapting the original TARZAN OF THE APES novel by Edgar Rice Burroughs. And, in the pattern of modern comic book storytelling, they are adapting it over the course of several issues as this one comic barely gets through the first 3 or 4 chapters of the novel (and that's by ignoring the set-up with the mutiny on the ship that leads to John and Alice Clayton being abandoned to the coastline of the Belgian Congo).

As adaptations go, it is pretty faithful to the book. The passage of time goes quickly as John builds an elaborate tree house to keep his pregnant wife safe from the dangers on the ground. The primary danger is shown to be a tribe of aggressive and powerful apes. In the novels, they are called Mangani and are described as a previously unknown species of great apes that is somewhere in intelligence higher than gorillas (Bolgani) but lesser than humans.

Most adaptations in film and TV have just ignored this aspect and made the apes into gorillas for purposes of telling the story. I'm not sure, yet, where writer Arvid Nelson is going with his adaptation because the apes in this comic appear to be gorillas and communicate with your basic “ooh ooh” ape-talk rather than the Mangani language that Burroughs described. However, there is an interlude with some Bantu tribesmen entering the jungle who encounter a vicious tribe of man-eating ape-like creatures that are identified with this exclamation: “What are these things?! They're not apes, they're not men—what are they?!”

They look very much like some of Frazetta's ape-monsters. They look like apes but are taller and leaner than the apes seen elsewhere in the comic and they wear loin cloths, armbands, and use knives. So, I don't know exactly how the whole Mangani versus Bolgani thing is going to eventually come down in this title, but what I read is intriguing.

This issue covers the nearly 2 years in which the Claytons arrive in the jungle, have the baby, and then meet their end so that the baby, John, can be adopted by a female ape who has just had her newborn brutally murdered by the bull ape who leads their tribe. It's a familiar story and retold quite well (although I'm sure Nelson had to find it funny to be writing things like “Aah! Aah! Aah!”, “Rah! Rah!”, and “Ooh! Ooh!” into a script).

The art is reminiscent of Neal Adams' Tarzan covers and drawings without directly copying it. Clearly Adams and Frazetta are an inspiration to artist Roberto Castro in his approach to the this comic book. I am going to once again ring that bell I ring everytime I review a Dynamite comic book though. It would benefit from using an inker rather than coloring directly on the pencils. There are moments where it works, but most of the time the line work is lacking and the color is overcompensating. It's a well-drawn comic. It would be stronger with a good inker and more subdued coloring.

POSTSCRIPT: Most people these days seem a bit more knowledgeable about copyright issues than they were just a mere 10 years ago, so it probably isn't news to anyone about why Dynamite is publishing a “Tarzan” comic book without the name “Tarzan” in the title anywhere. In the briefest way possible, it boils down to fact that while the first few “Tarzan” novels have slipped into the public domain, thus allowing Dynamite (or anyone) to adapt and do derivative works based on those; the fact that these stories are public domain has no bearing at all on the “Tarzan” trademark still owned by the estate of Edgar Rice Burroughs. If Dynamite wants to stick “Tarzan” in the title they would have to get permission from, and pay a licensing fee to, the ERB estate. So, they chose a descriptive title that evokes “Tarzan” without violating the ERB trademark.

Being the nerd that I am, I made the mistake of reading the indicia at the beginning of the comic just to confirm for myself that there were no attributions to or permissions from the ERB estate. But what I did find was that “Lord of the Jungle” is listed not as a trademark of Dynamite Entertainment but of “Savage Tales Entertainment, LLC.” So, I tried to do a little research to find out just who “Savage Tales Entertainment, LLC” happens to be and what I found was a bit confusing. I couldn't find anyone publicly associated with “Savage Tales,” yet they appear to be out there just basically squatting on any unused publishing trademarks they can find. For example, I found “Savage Tales” claiming trademark ownership of Pete Morisi's “Peter Cannon, Thunderbolt”...since 1966? “Savage Tales” claims they own the trademark to “Charlton Comics”, “The Human Fly”, and other obscure marks like that. I don't know exactly what's happening, but it appears they are doing like web domain squatters but with trademarks. I sent a message last week to the attorney listed on the recent legal ruling In Re Savage Tales Entertainment, LLC  just to ask for clarification. He was under no obligation to reply back...and he didn't. So, the best I can do is speculate. My best guess is that based on Dynamite's pattern of digging out old public domain characters and grabbing trademarks on new versions of them, that “Savage Tales” is a subsidiary of some sort (or a partner) with Dynamite and they function as the licensing subsidiary of Dynamite. That would offer some legal protection to Dynamite they might not otherwise have. Setting up “Savage Tales” as an LLC gives an even greater degree of personal legal protection.

That's my best guess. I would love to know for sure but information is hard to dig up online and the couple of people I contacted to ask about it either had no information or were unwilling to share. So, there you go. The comic's pretty good, but I have no clue what's going on with the whole “Lord of the Jungle” trademark thing.