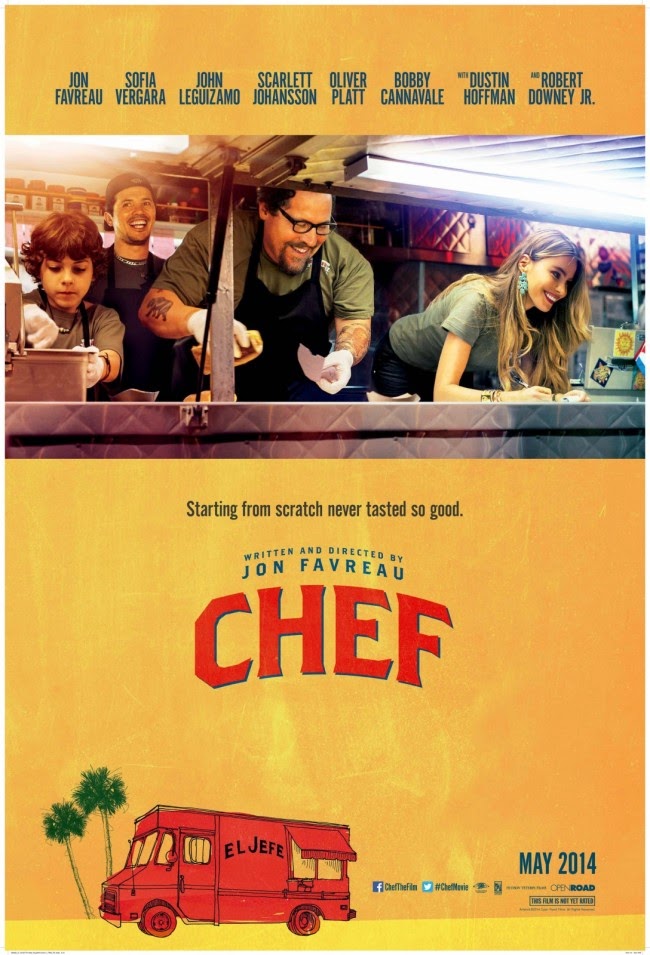 Very succinctly, this is the most charming and legitimately funny comedy so far this year.

I don't want to say too much about this one because I just want everyone to go see it and enjoy it like I did. This movie is so perfectly put together that watching it is like sitting down to a full course dinner topped with a nice after-dinner wine.

Chef Carl Caspar has spent the last 10 years of his career subjugating his own dreams and desires to the over-controlling owner of a posh Los Angeles restaurant. In this metaphor for everyone else's mid-life crises, we watch his career (and self-confidence) implode as he is pushed to rediscover his passion and his true self. His path to fullness is paralleled in a food truck trek across the country with his son, who he had previously been at best an absentee dad after his divorce.

Along the way we are inundated with real belly laughs that arise out of honest circumstances and true character moments. Damaged relationships are repaired and the path to happiness is restored as a hard truth takes hold: Happiness and satisfaction will always elude those who never pursue their dreams.

Also, there is absolutely no way to walk out of this movie without a craving for a Cubano sandwich. Thankfully, we have an excellent foot truck in Austin, Texas that serves Cubanos.

One other note, I went to see this film at a local theater in Austin and I wish that director and star Jon Favreau could've been in there because the audience was enthralled. They were interactive and reactive through out the entire film and especially when the road trip made its way into Austin and the truck pulled up to Austin's famous Franklin's Barbeque (voted best barbeque in the entire country by The Foodist at Bon Appetit). There were cheers and whoops of enthusiasm throughout the entire Austin segment.

This movie exemplifies so much of what is missing from so many Hollywood-based comedies. There is a renaissance of independent film happening right now and if you aren't seeking out gems like this you are missing out. You want more? How about Dustin Hoffman, Scarlett Johansson, John Lequizamo, and Robert Downey Jr.? If that doesn't get you in the door then I dunno what else to say. 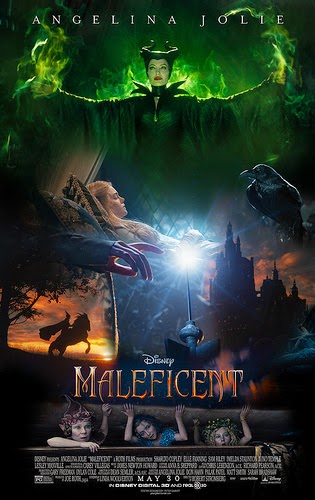 Angelina Jolie acts her socks off bubbling over with screen charisma, sensuality, and emotion. It's unfortunate that the film itself does not rise to match her passionate performance.

MALEFICENT is a good children's flick that had potential for achieving a lot more. If they wanted my 2 cents, I would have told them to get much darker with it and keep her the terrifying alluring villainess she is in the old SLEEPING BEAUTY cartoon. Alas, th...ey did just what the trailer hinted at and make her a heroine and not a villain. That does not mean the movie fails at that, in fact, they succeed in this. This movie is not about Princess Aurora and her true love prince defeating the deliciously evil Maleficent. In this version, Maleficent is the victim of Aurora's psychopathic father, King Stefan (melodramatically overplayed by Sharlto Copley with a terrible Scottish brogue that bounces all over creation).

Her turn to the dark side as a result of a youthful love affair between she and Stefan in which he betrays her in his selfish lust for the crown. But even in her darkest moments, she is shown to be lashing out in pain and not embracing her own darkness. She is never...evil. Stefan, on the other hand, deserves every bad thing that happens to him.

I could easily be convinced this rat bastard is the father of the sociopathic Prince Hans from FROZEN.

In this version of the story, Maleficent is a powerful fairy herself who inexplicably has these ram horns on her head and powerful feathered wings. She does not have the power to transform herself but she does wield magic that allows her to physically transform a helpful crow who becomes her devoted servant and protector. Their relationship is great and I would have enjoyed even more screentime with the two of them. Also, Maleficent's relationship with Aurora herself is utterly charming and believably strong. That is the heart of the movie and totally works.

Some things that don't work? The movie is over-narrated. Perhaps in an attempt to cut the movie down to a brisk 96 minutes as a selling point to children, they decided to cut out the difficult task of visual storytelling and rely on voice-over narration to fill in the gaps. I don't know, but it was a bit much. The special F/X on the other 3 fairies were distractingly off with their obvious CGI-ness versus Maleficent's amazing practical effects and make-up work. In fact, the entire magical moors world in which Maleficent resides has a bit of a too-much-cutesy look to it that is a bit jarring up against the excellent and much darker anthropomorphic tree monsters that serve as Maleficent's army. And worst of all, there's a big "reveal" moment that is unfortunately all too predictable to anyone who is a viewer of ONCE UPON A TIME or FROZEN. I have a feeling at the time of the writing of the script it was daring and original, now it is going to feel a little derivative.

For parents who have little kids who are attracted to the darker fairytales but would be overly frightened or overwhelmed by the LORD OF THE RINGS trilogy, this could be a good substitute for them. It's a little kids' movie and it is entertaining enough to keep from boring the parents. As such, it will likely be a box office hit. I would have liked it to aspire to more but it's still a nice afternoon matinee visit.