I came across three new books that sparked my nosy-ness recently.  I found these on the shelves at a local supermarket (presumably this indicates the targeted audience for these types of books).  So, I snapped some quick pics of the covers...just to demonstrate once again the utter absence of anyone else's name listed as "author".  The first book is FED UP! ostensibly "written" by Rick Perry.  The second book is titled IS IT JUST ME OR IS IT NUTS OUT THERE? and is purportedly "written" by Whoopi Goldberg.  The third book is George W. Bush's memoir of his time as President.  Do I believe DECISION POINTS was actually "written" by W?  No, I do not and digging into the acknowledgments will surely identify the true author. 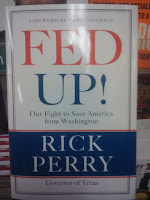 FED UP! is subtitled "Our Fight to Save America from Washington" and it says that the author is Rick Perry.  And to make sure everyone outside of Texas knows who Rick is, they make sure to place "Governor of Texas" right there on the cover.  First thing to note is that this book was primed to come out right around the time of Perry's ordination as lifetime emperor of Texas AND the beginning of his never admit-to run for the Republican nomination for President in 2012.  Otherwise, there's no other reason for him to have hired someone to write a book under his name and start waving his fist at Washington...except to establish himself as a Washington "outsider" and a good-ol-boy Texan who ain't gu'n take no guff from Oily Obama.

So who actually wrote this book?  Page 190 buries this special acknowledgment:

"I want to single out for special recognition Chip Roy, an outstanding legal scholar who previously served as senior adviser to U.S. Senator John Cornyn in his Senate leadership office and on the Senate Judiciary Committee, and who resigned his position as Special Assistant United States Attorney to devote himself full-time to the completion of the original manuscript.  Writing a book of this nature in the midst of a campaign for reelection was a herculean task and wouldn't have been possible without Chip's dedication aver the course of several months."

I'll bet.  Hello Chip Roy.  I bet you wrote your very own special acknowledgement.  I've heard Rick Perry talk.  He couldn't spit that sentence out if it was on a teleprompter.  How does it feel to see Rick Perry's name on the cover of a book you wrote?  I know, I know.  You were well-compensated.  I guess that's some level of satisfaction. 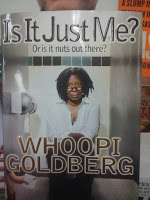 For some reason, I think Whoopi actually tried to write this book on her own and discovered...guess what?...writing books is harrrrdddd.  So, Whoopi writes in her acknowledgments:

"First, I want to acknowledge Tom Straw because without him I would have been able to have this done on time."

Since this kicks off a short acknowledgment section where everyone else thanked are people at the publisher...and her cat!...and since Tom's contribution here is non-specific yet spotlighted?  Hello Tom Straw.  You wrote a book and Whoopi Goldberg gets all the credit.  Well, except for here where I like to spotlight the Ghosts. 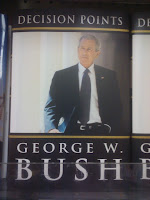 Former Bush speechwriter, Chris Michel gets my nomination as the true "writer" of W's memoir.  I base this on the lengthy (and tell-tale non-specific contributions) acknowledgments  and he is neither a family member nor employed by the publisher...nor is he one of the family pets. Here's the key quotes:

"When I considered writing this book I knew the task would be a challenge.  I did not realize how enjoyable it would be.  The main reason is that I worked with Chris Michel .  At the end of the administration Chris was my chief speechwriter.  He knew how I talked and saw much of the history we made.  His broad range of talents, from research to editing, has made the project move smoothly.  His upbeat personality was a constant joy.  I will miss him as he heads off to Yale Law School."

Welcome to Yale Law, Chris Michel, author of DECISION POINTS.  I hope they don't misunderestimate you.
Posted by Keith Howell at 1:40 PM