Now, I realize that I am literally the only person reading this who even remembers SPACE: 1999, and a lot of my interest in the show was my budding puberty and the presence of the sexy Barbara Bain (of MISSION: IMPOSSIBLE) fame in the cast. However, that being said, the early-to-mid-70s was not particularly notable for high-end sci-fi TV shows. Sure, we had the SIX MILLION DOLLAR MAN/BIONIC WOMAN shows going. We had a quickly cancelled, and pretty lame, PLANET OF THE APES TV show. There was the also the quickly cancelled GEMINI MAN (about a secret agent who could turn invisible). In general, sci fi was not the popular thing it is today. It’s amazing what the appearance of STAR WARS could do in terms of completely shifting the entire paradigm of what the masses crave in popular entertainment. I cannot emphasize enough how difficult it was for the few closet geeks like me out there who were stuck watching chopped-up reruns of STAR TREK and LOST IN SPACE every day to find a fix of something space-related that was actually new! 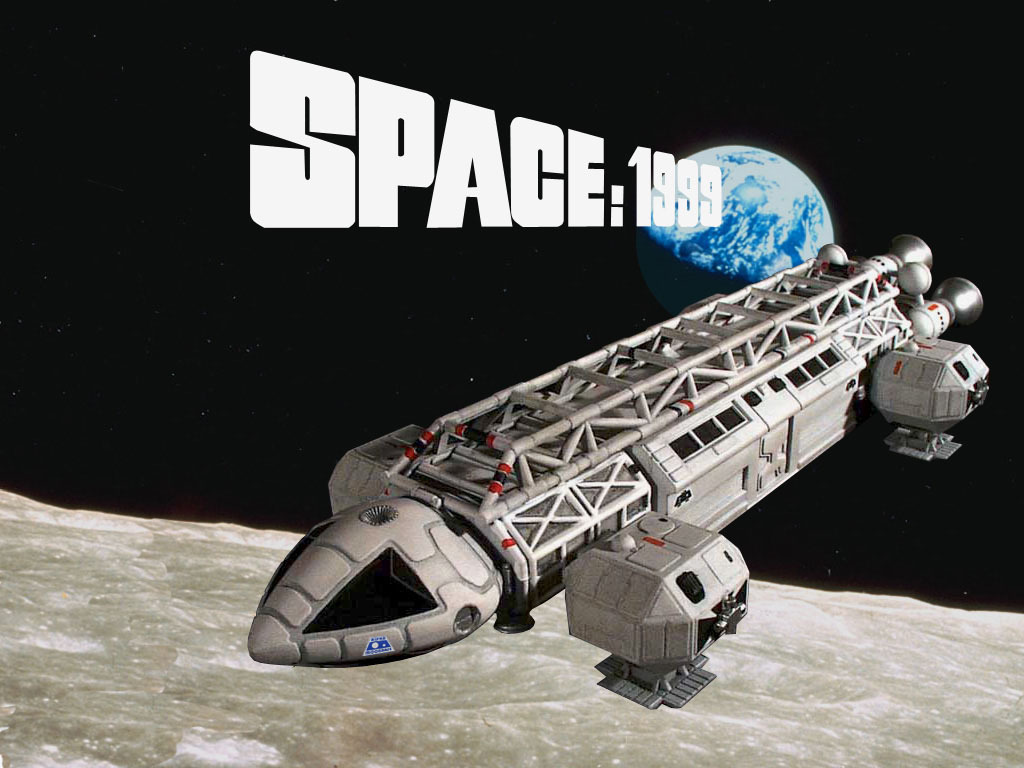 SPACE: 1999 was from the same guys who brought us a show I used to watch as a wee child called UFO. In fact, it’s almost a kinda sorta sequel to that show. In 1970, they set UFO in 1980. And in the mindset of those days where we had just recently walked on the moon for the first time, I am sure the expectation was that surely we would be regularly jetting in and out of space and battling space aliens right and left by 1980. By 1999, surely we would have moonbases established with humans living and working on the moon as easily as, say, living in Arkansas or something. 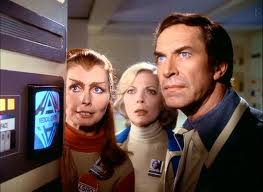 And that was the premise of SPACE: 1999. In 1975, it was set 24 years in the future in the year 1999 and Moonbase Alpha is where our intrepid team of scientists, headed by Doctor Helena Russell (Barbara Bain) and Command John Koenig (Martin Landau), live and perform futuristic experiments. When an unexpected thermonuclear explosion propels the moon out of Earth’s orbit, Moonbase Alpha is hurled along with the runaway moon into deep space. While hurtling through space, they encountered all kinds of bizarre 70’s-style aliens and monstrous threats. They had cool vehicles like the moon buggy and the Eagle space shuttle. For the times, pre-STAR WARS, they were pretty well done. I actually remember drawing the Eagle once, copying it from the SPACE: 1999 comic put out by Charlton Comics at the time. 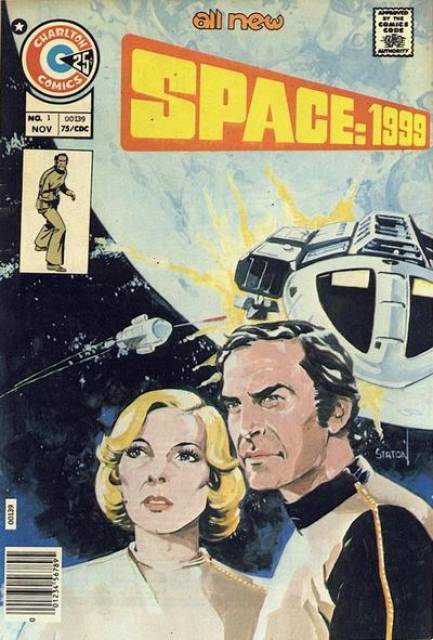 Which brings us to this 172-page graphic novel from Archaia. This is a very well done book, and it
is unique. One of the things about SPACE: 1999, the TV series, was that we never really had a peek at Earth. It all took place on Moonbase Alpha. And since, in the pilot episode, the moon was tossed out of orbit there really was no reasonable way for them to explore Earth in terms of stories because for all intents and purposes the relationship between Moonbase Alpha and Earth was forever severed, sSo, we never really got to see how that futuristic society had evolved or what the politics of the time were. We had some hints given, and the show itself did much of what STAR TREK had done in the prior decade and presented morality tales that touched on issues current at the time of the series. And what writer Andrew Gaska does in SPACE: 1999—AFTERSHOCK AND AWE is a three-fold stroke of brilliance. First of all, he tweaks the premise slightly to explain how we can have the events of SPACE: 1999 happen when we still have a moon and no moonbase in 2013. Gaska posits that the world of the series was set in an alternate reality where JFK was never assassinated and the space program progressed much faster and farther than it did in our reality. Secondly, he takes the original Charlton Comics adaptation of the pilot episode, in a story titled “Awe” with remastered art by the late, great Gray Morrow, and reprints that story. And thirdly, he then picks up after that with a story called “Aftershock” that picks up the story on Earth so that the reader can see the aftermath. What happens to the Earth and the people in the days, months, and even years after the moon is torn from its orbit and hurled into deep space?

So is it any good? 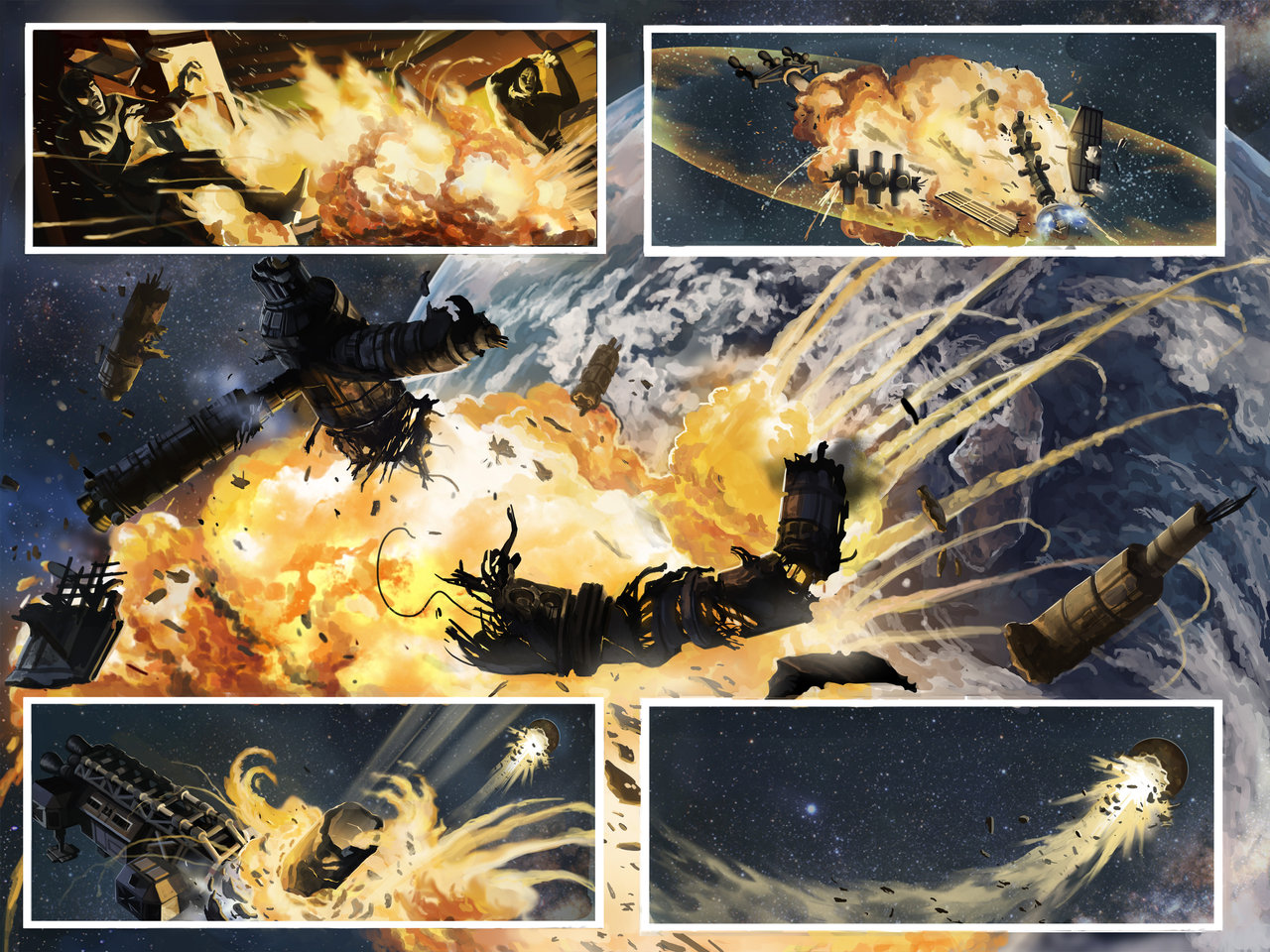 Well, yeah. I think so. I honestly think the adaptation by Gray Morrow is the superior story, but I’m biased since I’m an old-school comics guy with a nostalgic bent. That being said, the new stuff illustrated by Miki and Hueso is also pretty solid storytelling in a more current style. The two styles are not particularly compatible, but they work within this context because of how it is presented. That visual jump in styles from a classic old-school 70’s style of comic art to the more modern digitally enhanced stylings of 2013 comics art adds to my enjoyment.

I like how the “Aftermath” story breaks it up into focusing on separate characters for each chapter so that the reader gets different perspectives as to the impact of such a cataclysmic effect. This book is solid sci-fi entertainment with a nice tinge of nostalgia. It took me awhile to read, mainly because of the density of the writing in the reprinted adaptation of the TV-series pilot. It’s good, strong sci-fi with enough to satisfy the old-school readers and younger readers if they can get past the 1999 in the title. Give it a try. I think you’ll like it.
Posted by Keith Howell at 9:24 AM