A Review of THE GREEN HORNET 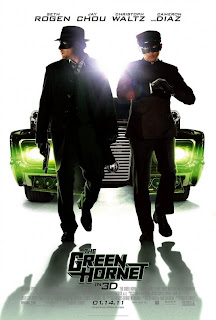 
Official Synopsis:  Britt Reid (Seth Rogen) is the son of LA's most prominent and respected media magnate and perfectly happy to maintain a directionless existence on the party scene until his father (Tom Wilkinson) mysteriously dies, leaving Britt his vast media empire. Striking an unlikely friendship with one of his father's more industrious and inventive employees, Kato (Jay Chou), they see their chance to do something meaningful for the first time in their lives: fight crime.


Protecting the law by breaking it, Britt becomes the vigilante the Green Hornet as he and Kato hit the streets. Using all his ingenuity and skill, Kato builds the ultimately in advanced retro weaponry, The Black Beauty, an indestructible car equal parts firepower and horsepower. Rolling in a mobile fortress on wheels and striking the bad guys with Kato's clever gadgets, the Green Hornet and Kato quickly start making a name for themselves, and with the help of Britt's new Secretary Lenore Case (Cameron Diaz), they begin hunting down the man who controls LA's gritty underworld: Benjamin Chudnofsky (Christoph Waltz). But Chudnofsky has plans of his own: to swat down The Green Hornet once and for all.

Any GREEN HORNET purist with a stick up his butt needs to avoid this movie at all costs.  Anybody who likes to have a good time at the movies needs to rush out to see THE GREEN HORNET this weekend.

This time of year is usually the dumping ground for the Hollywood studios for the garbage they are contractually bound to release in the theaters but are essentially unwatchable duds.  THE GREEN HORNET breaks that tradition.  This is a solid, fun, funny, and entertaining action film with good performances all around.  It also boasts some extraordinary action and fight sequences and great use of 3D over the closing credits sequences.

Put me in the category as one of many who groaned when I heard the name Seth Rogen attached to THE GREEN HORNET.  My first thought was that they were going for a spoof or a parody.  But I was wrong.  Yes, this movie had moments where I was howling with laughter, but it was laughter from legitimately funny interplay or situations unfolding from characters I liked and came to love.  No, this is not the deadpan Van Williams' portrayal of Britt Reid/Green Hornet.  No, this is not the Bruce Lee version of Kato.  The writers of this version of THE GREEN HORNET chose to throw out the legacy aspect of the Green Hornet and Kato and instead develop a series of events and relationships that make the creation of the Hornet's identity a plausible outcome even in 2011.

The previews made it seem as if Seth Rogen is essentially playing Seth Rogen once again in this movie.  And while there are certain Rogen-esque trademarks here in his performance, he developed somebody new here.  In this story, Britt Reid is the son of a crusading newspaper owner and publisher.  His father is a strict and harsh, but staunchly righteous man.  His insecure son is a mess of unrealized potential.  Britt at times can come off stupid, but the truth is that he is not stupid...he has never applied himself to the task of education or self-improvement.  After the death of his father, Britt comes face-to-face with mortality, loneliness, and his own lack of purpose.  In some ways, he is evocative of Bruce Wayne in that he is a child of wealth and power.  But whereas the playboy persona of Bruce Wayne is the "mask" that Batman wears to dissuade the public from associating the two men, Britt Reid truly is the carefree and reckless playboy that Wayne can only pretend to be.  The progression of Britt from directionless man-child to a man of purpose and determination is believable because Rogen lets us see sparks from the start that buried within is the man that his father always hoped he could be.  But it takes Kato to bring that out of him.

Kato and Britt bond following the burial of Britt's father.  This bonding quickly blooms into a co-dependent friend relationship and ultimately into one of antagonistic brothers who piss each other off but each would die for the other.  This relationship between Kato and Britt is the reason this movie works so well.  There is an extensive fight scene between the two, over a woman naturally, that is fantastic.  It works on the "cool" level, but it also is an emotional breaking moment between the two that establishes that you never get as angry or disappointed in someone else like that...unless you genuinely love them.  Plus the scene had me laughing out loud.  These two grow together into something that feels real.  Outstanding performances by both of them.  Jay Chou's role as Kato is (get ready for the internet to break) at least 10 times what Bruce Lee gave to it.  Chou can actually act and he gives his all to make Kato real and connect with the audience.  Plus, his fight sequences were some of the best orchestrated things I've seen before.  Not only thrilling, but often funny and always exciting.

Christoph Waltz as "Blood-nofsky", the gang kingpin of Los Angeles, was equal parts hilarious and scary -- which is exactly what they were going for.  I was concerned at first about how a modern-day movie could realistically present a scenario in which The Green Hornet could establish himself legitimately as a criminal and still be able to perform heroic deeds.  These filmmakers figured out how to do it.  It makes sense as The Green Hornet invades the various gang turfs in L.A. and destroys the drug-making labs and other criminal enterprises.  All of this done under the guise of taking out the competition as the new master criminal known as The Green Hornet attempts to take-over the underworld.  Brilliant stuff.

The action sequences are outstanding as well.  About the only thing I have in terms of criticism is not really a criticism but a recognition that the action sequences start small and keep getting more and more elaborate and huge until it builds to an absolutely absurd (but wholly entertaining) action-based climax.  The director utilized 3D to good effect within a number of these action sequences with lots of things bursting and flying out of the screen.

Cameron Diaz is the only flat player in this otherwise very good movie where she plays the dull character of Lenore Chase, Britt's secretary and an unrequited love-interest of both Britt and Kato.  The comedy there comes from their competing peacockery for her attentions.

The classic Green Hornet theme music and groovy psychedelic imagery make an appearance at the end of the movie, wrapping things up in such a way that the audience is stoked rather than let-down.  THE GREEN HORNET is terrific.  I'd give it an A-, and the minus is just for Diaz and the overly absurd lengths they went to for the action climax.  There's some graphic violence and quite a few cuss words from our erstwhile hero, so it may not be appropriate for the very little ones, but I can't imagine teens on up wouldn't love the movie.  My 15 year-old has already made sure that I know that he plans on owning this one on DVD when it becomes available.  That's the highest compliment I know.