The Worlds of Philip Jose Farmer -- Creating a Cover

About a year ago, I embarked on a project that I was excited to be a part of.  I was approached to create a cover (and a title design) for a new book dedicated to honoring and expanding upon the legacy of the late author, Philip Jose' Farmer in what came to be titled:  THE WORLDS OF PHILIP JOSE' FARMER:  PROTEAN DIMENSIONS.  I was re-reading Chris Roberson's fantastic contribution, The Final Flight of Greatheart Silver, and started reflecting back on this piece. I thought it might be interesting to show some of the steps it took to get to the final project and illustrate it with as many of the different stages as I still had files on and undeleted emails.  So, read on to gain a little insight into how I work.

I was initially contacted by my friend, FARMERPHILE editor, Michael Croteau about whether I might be interested, which I was.  This opened up a series of communications with a group of writers and editors, and myself, in trying to generate a creative spark within me.  At the time, the intention was to continue the recently concluded FARMERPHILE magazine with a series of book-sized FARMERPHILE ANNUALS.  I was working on another project at that moment and wasn't able to give serious consideration to coming up with a cover concept for this FARMERPHILE ANNUAL.  I wasn't inspired....but I wanted to be.  As the conversation between the team evolved, the concept behind the FARMERPHILE ANNUAL also evolved and one night I got dinged on my cellphone with an email.  That email from Win Eckert proposed something wild.  He proposed letting the FARMERPHILE name rest and naming it THE WORLDS OF PHILIP JOSE' FARMER as a way of marking it as something new.   The plan changed to a series of yearly annual anthologies called THE WORLDS OF PHILIP JOSE' FARMER and demark them with subtitles.  The first volume being THE BITE OF THE ASP (though this was later changed to PROTEAN DIMENSIONS).  And the rest is now history.

And I had a concept -- a space scene depicting the various planets from Phil's many different stories.  Which is a great idea, however, what I realized as the artist was that pulling back far enough from the planets to incorporate more than just a couple of them meant that a lot of the detail that you would expect from, say, the Riverworld or The World of Tiers, are going to be lost.  So, I was going to take steps to try to give the planets textures that distinguished them from each other and look alien, but I knew that identifying them was going to be something probably only I would be able to do.  But I thought it could make for a cool design, basically an entire solar system of different planets than our own.  The only direction I had received at this point was to avoid putting faces on the cover, to distinguish this book from fanzines and pulps. 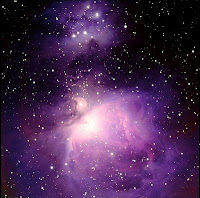 First thing I did was grab a public domain space photo of Orion to manipulate for the background.  Then I went into Wikipedia and grabbed a public domain hi-res grouping of planets, Mercury, Venus, Earth, and Mars.

Then I isolated Venus, Mars, and Earth respectively...and manipulated and tweaked them within Photoshop.

These would form the basis for my solar system.  I pulled these elements into Photoshop and experimented with a color scheme.  I decided that I wanted to go really bold with it and give this otherworldly design a fiery look to it.  I thought that it would distinguish the look of the book to be bold and hot with the color scheme.   I also took this old photo of Phil and "ghosted" it into the image for the back cover of this wrap-around cover design.  The way I feel about it is that Phil is basically the "God" of the worlds he created and I wanted to give that sense of him looking out over his creation from on high.  Lots of manipulations, texturing, brushstrokers and effects later...below is the initial design created in layers on Photoshop. 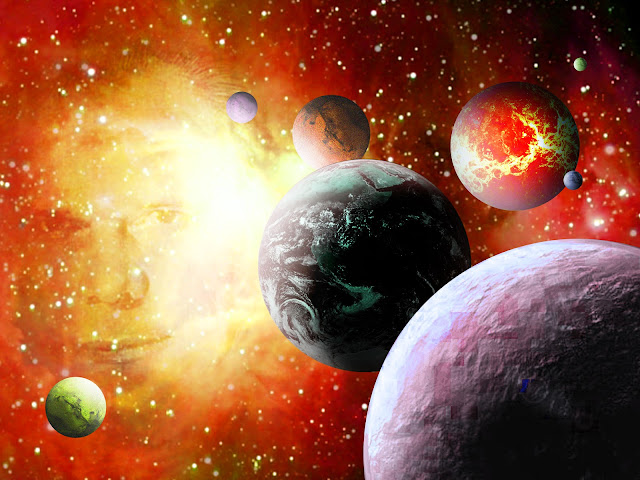 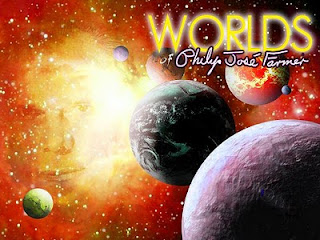 I provided a mock-up with an idea for the title design where I scanned in Phil's actual signature and tried to utilize that in the title itself.  In my mind, I was trying to emphasize the "Worlds" aspect in the title, and that's why it is so prominent.  I chose "Maximo" as our title font, and that stayed through to the end.

I received back some good feedback.  Mostly positive.  However, the planet that I created for the most prominent foreground position was liked the least.  My thinking on this was that we were going to be listing the contributing authors on the cover, so I wanted something that would not detract from that.  However, the visceral reaction was not good.  So, I needed to keep that in mind.  I was also encouraged to maybe try making one of the planets more obviously, say, Riverworld and maybe make one into the Lavalite world which "could have a mass ripping away from one side and other mass crashing into the other side (about the size of the moon next to that red planet, under Farmer)."  I also received back a mockup from Chris Carey, following the old basic FARMERPHILE cover design, showing the cover text at that point so I could have a visual to go by on what kind of space is needed.

I liked the visual of the Lavalite world cracking apart.  That gave me some solid direction creatively.  I received some direction on the title design that included dropping the signature font, reducing "Worlds", adding "The", making Phil's name more prominent, and adding "Protean Dimensions."  I also received some growing interest now in moving Phil's face to the front...but nothing firm on that yet.  After much Photoshop tinkering, this was the second round on the cover design, incorporating as much as I could in terms of suggestions.  Basically, my color-enhanced Earth became, in my mind, the Riverworld...and Mars became my base planet for the Lavalite world as I went in and played with the color and textures, then blew it apart by having our color-enhanced moon smashing into it.  It also occurred to me that a hi-res photo of Mars could be used as a good base image for creating Darkseid's "Apokolips" in Photoshop....but that's for another day. 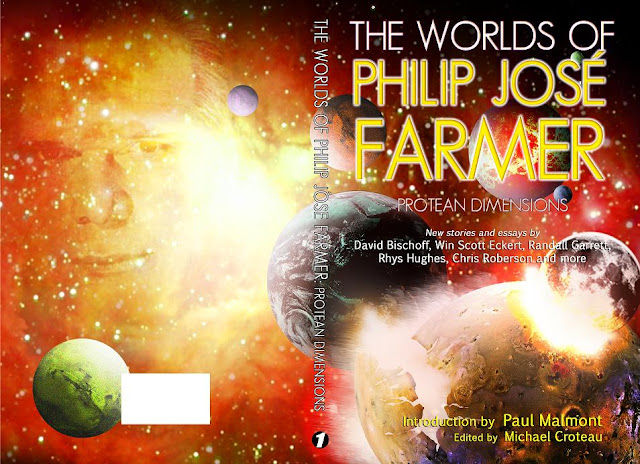 Based on feedback, I rearranged the "activity" onto the back cover mainly.  I enlarged and brightened up "Protean Dimensions", added James Gunn to the contributors and enlarged the font size on that as well to make it easier to read.  At this point, I was starting to feel like the book was going to wind up with one of those covers that was going to basically be a starfield with text.  That was disappointing to me.  I didn't like how the planets seemed now to be so randomly thrown together onto the back cover and Phil's face was starting to feel superfluous to the design.  I needed some feedback at this point, and I got it. 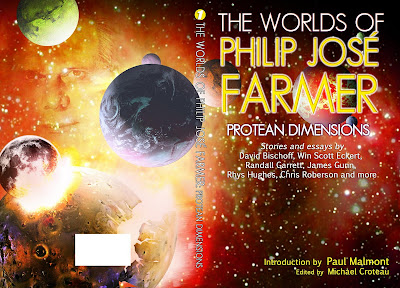 The next round of feedback, I was told that "the lettering looks great, but we're still not crazy about the cover art. Especially since there is now a big "dead space" right below "and more" which makes you wonder why we didn't just keep listing names."  I was glad to hear the news about the lettering, and I agreed about the art at this point.  So what did they want me to do now that we were coming dangerously close to deadline?  I was asked to take Phil's face and move it to the front and shift the "Stories and essays" text  down towards the yellow text and, if possible, "to take the layer with the stars and shift the colors more towards the blue spectrum?"  For, as I was told,  "the more we keep looking at this, the more tiring the red becomes."  Ouch.  Haha.  Part of the game of commercial art.  I, personally love the red spectrum...but I'm also a bit of a "Fire" personality so that makes sense.  But I was confident I could make the blue spectrum shift work.  As I was working on these changes, I received an email from Mike that finally gelled the whole idea for me.  In it, he asked me "How hard would it be to arrange the planets to give the impression they are spiraling out of Phil's mind?"

That's what I needed right there.  I immediately knew what to do.  And this is what I came up with: 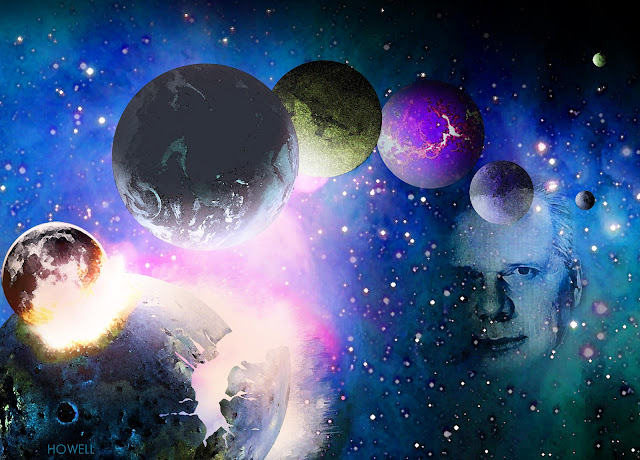 This one worked on all levels for me and, I hope, for everyone else.  We were running right up on deadline by this point, so I laid it out and worked it up to the publisher's specs and isolated the graphic elements in gray tones so that Mike could use them within the book to spice up the page designs and we had a book cover. THE WORLDS OF PHILIP JOSE FARMER: PROTEAN DIMENSIONS featured a cover image with the sparkling mischievous eye of Phil looking straight into the reader while worlds of creativity are bursting from his mind like Athena bursting out of Zeus's head. 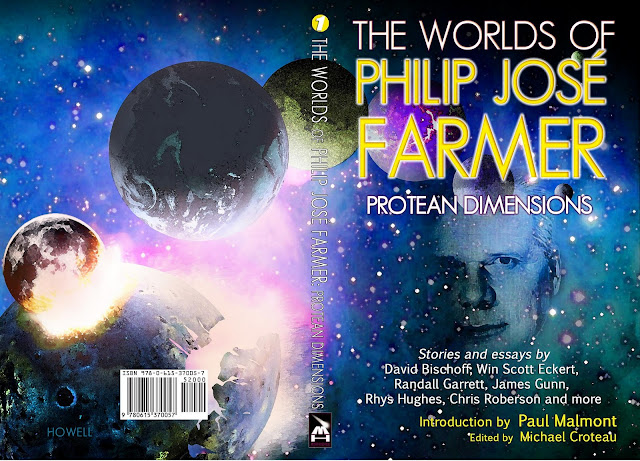 The book is still available at the Meteor House Press website and highly recommended.

US$ 20.00
6×9 tpb, 264 pages
ISBN-13: 978-0-615-37005-7
LIMITED EDITION
of 500 copies
Edited by Michael Croteau, this new anthology is a tour through SF Grand Master Philip José Farmer’s many creations, featuring essays by the likes of Randall Garrett and James Gunn, interviews with Farmer, stories set in Farmer’s expanded worlds by Chris Roberson, David Bischoff, Rhys Hughes, and other SF/F talents, and previously unpublished fiction and more by Farmer himself.