I'm loving the relaunch of Atlas Comics!  Here I review the final 2 titles in the initial phase of the relaunch. 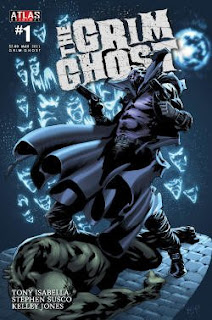 THE GRIM GHOST #1
Writers: Stephen Susco & Tony Isabella
Artists: Kelley Jones (pencils) & Eric Layton (inks)
Publisher: Atlas Comics
“It pleased me to know that the last thing you would see before I hanged you would be your lover dangling from her own hangman's noose!” – Braddock

The second book in the big Atlas Comics relaunch is THE GRIM GHOST. My familiarity with the original 70s version of the character is limited to the house ads that ran in other Atlas comic books. I never came across a copy of the actual series. So, as opposed to WULF and PHOENIX, I approached this relaunch without any prior knowledge of what came before. I vaguely remember an image of a hooded man on a horse. That's about it. I can't address at what points this new series is similar to or veers away from the original concept.

When I first got my hands on the comic, I didn't have time to really read it, so I flipped through it to check out the art. I was pleased to see Kelley Jones listed as the artist. If I want a comic book to evoke a dark mood of mystery and horror, and Bernie Wrightson isn't available, Kelley Jones is the guy I would go to. A skilled artist at utilizing shadow and cinematic angles, but also expressive distortion to great effect. His run on BATMAN with writer, Dough Moench, continues to be one of my favorite runs. This series set in an other-dimensional purgatory, co-existent with ours, called "The Fringe" where lost souls continue their existence after death before moving on to heaven or hell is a perfect match for Jones. The Grim Ghost (Matthew Dunsinane) haunts The Fringe attempting to save those lost souls from coming under the control of the evil Braddock and finding themselves sentenced to eternal torment. The Grim Ghost also appears to be quite mad himself after some 200+ years trapped in The Fringe.

The Grim Ghost and Braddock have a yin-yang conflict that stretches back to their former lives. The Grim Ghost himself was a rogue-ish Highwayman from the Colonial days of America who fell in love with Braddock's wife and she gave her heart to him. Braddock murdered the both of them. Now the brutish Braddock and his band of evil demonic thugs haunt the shadows and alleyways of The Fringe looking for souls to grab. The Grim Ghost is locked in an eternal battle to gain souls for his side first...and apparently to put the beat-down on the taunting Braddock whenever he gets the chance.

This was a well-written first issue and a good set-up for the series. I found this to be a good concept for a character that really isn't just another super-hero, but something a bit more interesting.

Once again, a thoroughly enjoyable issue from the all-new Atlas Comics. Well worth your time and money. 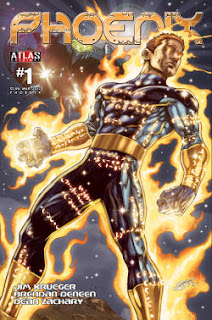 It's been like a 1-2-3-Punch! From Atlas Comics the past couple of weeks. Starting with WULF, then THE GRIM GHOST, and now PHOENIX, Atlas is on a solid roll with quality comic books. There's definitely a good retro-feel to the books but with the ramped up pacing, story-arc structure and quality production expected of comics and graphic novels today (including stronger language, graphic violence, and intense storytelling).

The original PHOENIX series back in the 70s was very much a product of the times. In a sense, it reminded me of THE SIX MILLION-DOLLAR MAN with aliens. That series centered on an astronaut from Skylab kidnapped by space aliens, who were evil observers of human evolution, and winds up incorporating some of their technology into his flight suit which gives him access to great power. So, of course, the first thing he does is use the power escape from the aliens and save the capital city of Iceland. Yep. Iceland. It was a nice effort of a comic book but while it looked nice, it was dreadfully dull to read. I like the covers though.

This new PHOENIX series is absolutely the opposite of dull though. It is an exciting, fast-paced adventure that is only frustrating in that it ends on a cliffhanger...and that means we have to wait to see what happens next.

Ed Tyler is not an astronaut (at least I don't think so at this point) in this version. He appears to just be a normal guy thrust into an awful situation. While visiting his home town, the entire population was kidnapped by aliens and brought on board their spaceship and killed one-by-one. They are obviously sifting through the people to discover the one-in-a-million human being who can wield the power of these “Phoenix” suits. So, the comic begins with them repeatedly killing Tyler and the suit bringing him back to life. Rather than eventually becoming unable to resurrect, like nearly everyone else in town, apparently, Tyler just seems to get stronger with each resurrection until he finds himself wielding dramatic cosmic power and breaks free from his alien torturers.

We don't know who these aliens are yet, so there's a mystery both as to who they are and what their ultimate purpose is in brutally and dispassionately murdering thousands of people in an attempt to find their “candidate.” Candidate for what is part of the mystery to unfold in the course of the series.

Tyler's reaction to the situation feels real. He is going to be a hero not because of the powers he wields but because he has the character and determination to do what's right and face-down a threat as daunting as these malevolent and much more advanced aliens and their technological superiority.

The artist, Dean Zachary, is a new name to me and a very impressive debut. I really enjoyed his art from start to finish. The art looks like it is reproduced from his expressive and detailed pencil illustrations then painted over it which gives the art a look very similar to the style Eric Powell uses now on THE GOON.

The design of the alien suit that Tyler is bonded to is good. Simplicity in design and believable. It reminds me of some of those 70s Marvel costumes like Capt. Marvel and Capt. Universe. Slick, sleek, and stylish.

The original Atlas Comics attempted to “out-Marvel” Marvel Comics and failed. I think the new Atlas Comics is just trying to make really good, old-fashioned fun, and exciting comic books...and PHOENIX is a great example that proves they are succeeding.