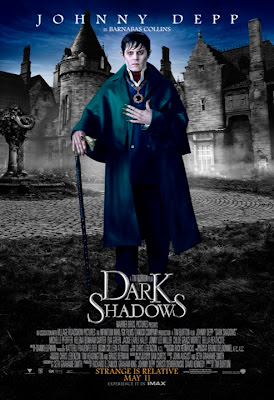 Synopsis: In the year 1752, Joshua and Naomi Collins, with young son Barnabas, set sail from Liverpool, England to start a new life in America. But even an ocean was not enough to escape the mysterious curse that has plagued their family. Two decades pass and Barnabas (Johnny Depp) has the world at his feet—or at least the town of Collinsport, Maine. The master of Collinwood Manor, Barnabas is rich, powerful and an inveterate playboy…until he makes the grave mistake of breaking the heart of Angelique Bouchard (Eva Green). A witch, in every sense of the word, Angelique dooms him to a fate worse than death: turning him into a vampire, and then burying him alive.

Two centuries later, Barnabas is inadvertently freed from his tomb and emerges into the very changed world of 1972. He returns to Collinwood Manor to find that his once-grand estate has fallen into ruin. The dysfunctional remnants of the Collins family have fared little better, each harboring their own dark secrets. Matriarch Elizabeth Collins Stoddard (Michelle Pfeiffer) has called upon live-in psychiatrist, Dr. Julia Hoffman (Helena Bonham Carter), to help with her family troubles.

Review:  I love Tim Burton movies and, so, it is no surprise that I also liked this one.

I love DARK SHADOWS and, so, it is no surprise that I also liked this one. 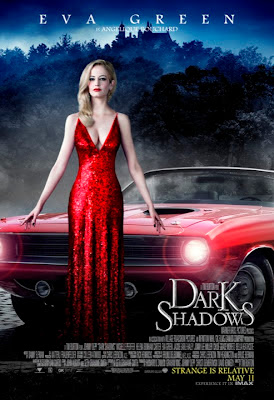 It definitely surprised me in a lot of ways. One of the most important surprises were the more subtle ways that it referenced the old show. Specifically, the pacing of a number of scenes in which it was just Barnabas and another character alone in a room. They copied the incidental music and the rhythm and pacing of the stilted dialogue perfectly. The slow way Barnabas walks around and Johnny Depp is totally aping Johnathan Frid's way of dragging out his words slowly as he tries to find his cue cards or remember a line.

Most definitely go into it knowing that it is NOT a spoof. They find opportunities for hilarious moments of comedy, but it is NOT a spoof. The ghost and witchy stuff is legitimately creepy and there's some other creepy imagery throughout. They don't shy away from vampire brutality either. Some light insinuated raunch and sex. The period music choices add a lot of flavor to it and it felt authentically 1972 to me as I watched it, especially the way they had it lit in the exterior scenes.

As with nearly every Tim Burton fantasy movie, the final act goes a bit over the top (anyone remember the final act of Joe Johnston's THE WOLFMAN a couple of years ago? Big fantasy fight scene inside a burning mansion -- that sort of thing). They resolve the story in such a way that it does not have to be a franchise but leave enough options available if they choose to do it.

There's a lot of interesting symbolism that Burton has fun with -- especially with Angelique. All of the actors seemed like they were having a lot of fun but Eva Green was reveling in her role as Angelique. I found Bella Heathcote to be ethereal and very engaging in her wide-eyed role as the beauty, Josette/Vicki. Helena Bonham Carter steals all of her scenes with her cigarette-scarred voice and bright red hair as she lusts after Barnabas. Johnny Depp carries it all and is so likeable as Barnabas that you even forgive his foible of brutal blood-sucking murder.

It was not really what I expected. But I enjoyed what I got.

I will be paying to see it again soon. 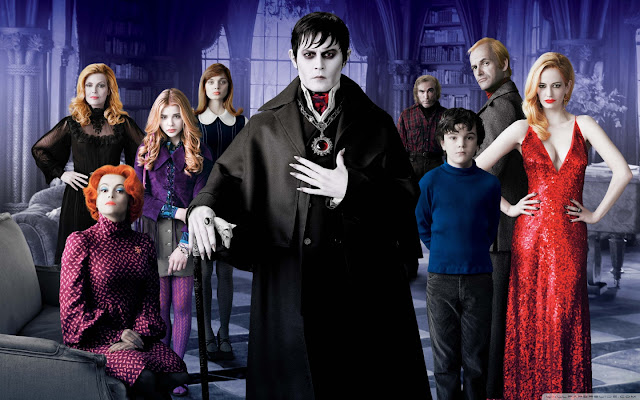