It's the Yuletide season and predictably, the bookstores are astocked with books cynically cobbled together to appeal to the stereotypical Right Wing, Conservative, Christian gift-buyers.  Like the shoe cobbler waking in the morning to find the elves had repaired all the shoes, we can always depend on a slew of Right Wing media darlings to slap their names on books ghost-written by other people and proudly claim authorship.  And the target audience gobbles them up, slaps wrapping paper on them, and down under the Xmas tree they go for dad, grampaw, or your looney uncle to exclaim their glorious pleasure on Xmas morning at the gift given to them.

I happen to have a moral problem (and I know it's just me) with people who slap their names on books when they didn't actually write them.  So, today I'm going to spotlight the ghost-writers and shine the light on them.

The trend in the past has been to bury the ghost-writer's name in the "Acknowledgements" section of the book.  Isn't that classy?  "I'm going to pretend I wrote this book and get all the royalties and recognition but I'm so magnanimous that I'm going to toss an acknowledgement bone to the actual author at the end of the book at the same time I'm thanking my wife, my editor, my manager, my mom, and my dog."  Sometimes that's made it tricky for me to dig through the string of names to glean the true author, and sometimes I may have missed it, but I don't think so.

The current trend, in this mass media age of bad publicity, is to at least put the real author's name on the cover, just make sure that the font is about 1,000 times smaller than the name of the liar who's claiming authorship and getting all the attention and money.  Today I am going to spotlight 5 current books that I believe are ghost-written and shine the light on who I think was the real author rather than the one who gets sole or top-billing.

1. The first book to spotlight is RUSH REVERE AND THE BRAVE PILGRIMS. 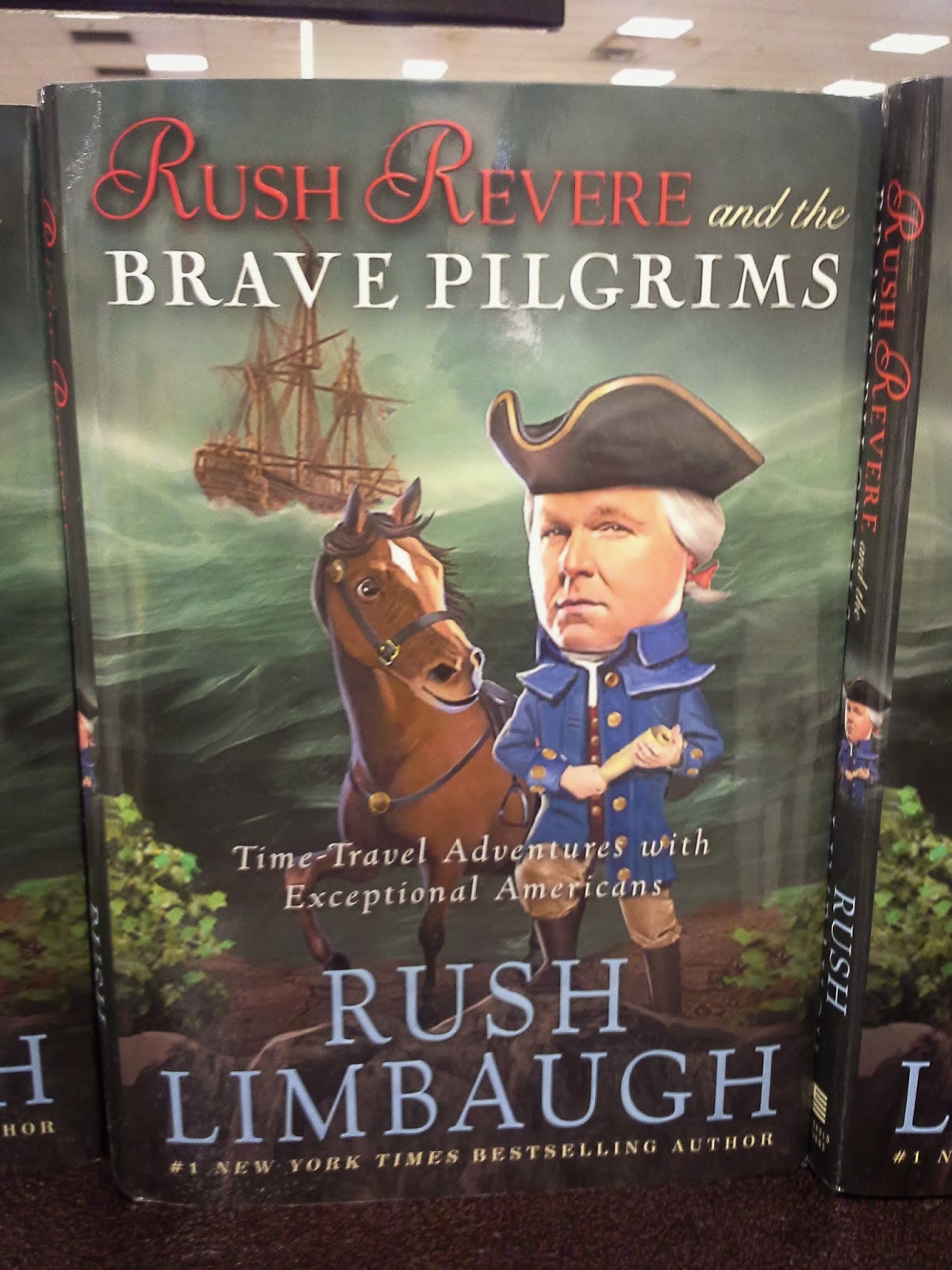 The description goes like this: "Join Rush Revere on exciting time-travels with his special horse Liberty! Rush Revere travels back in time to experience American history as it happens...."  I'm sorry, that's as far as I could get before throwing up in my mouth.

He may have come up with this insipid concept but that's where his contribution ends if even that.  It actually sounds more like something his yes-minions probably came up with one day while clipping his nails and popping his back zits. 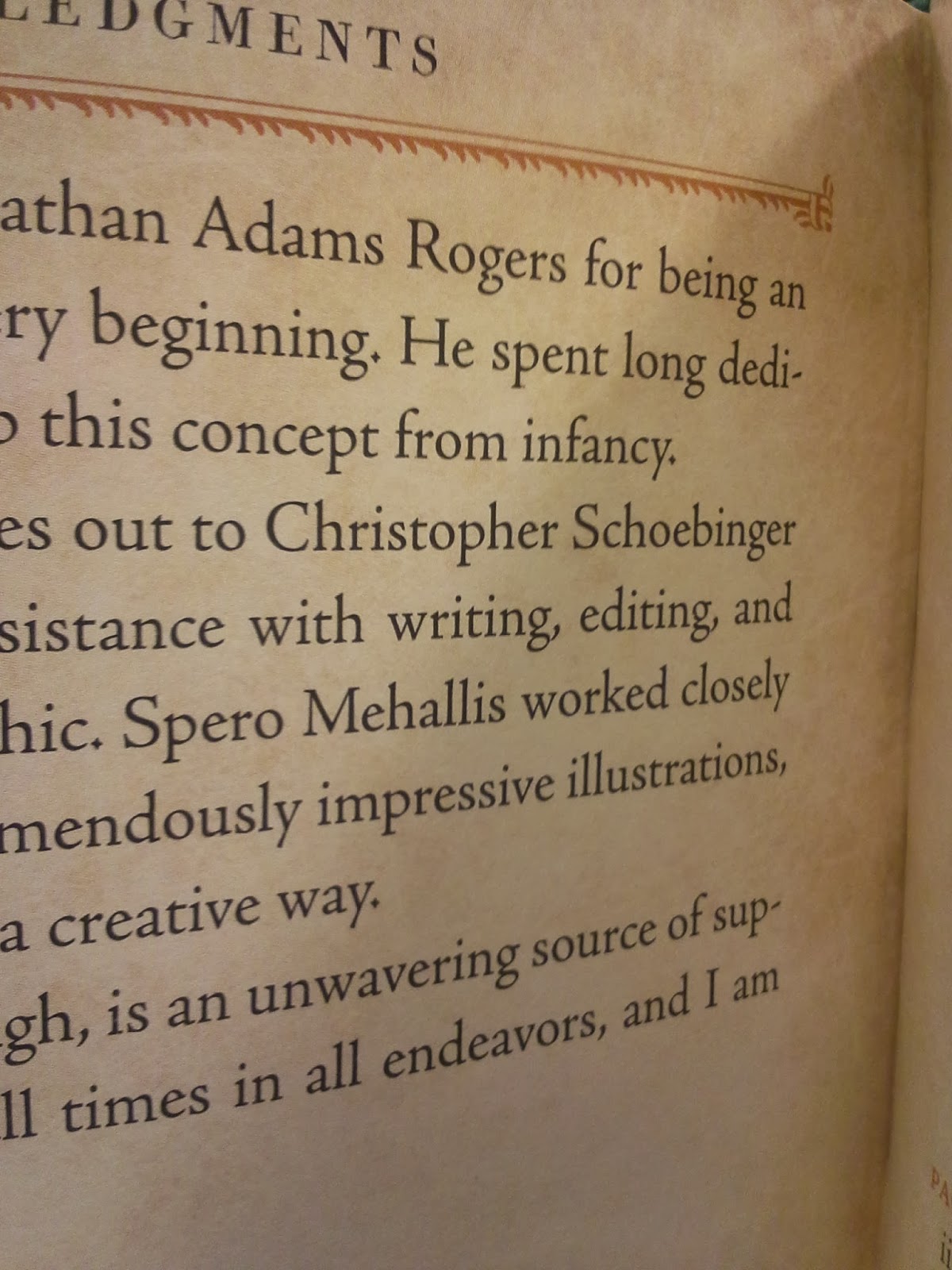 So, since Rush is not one for class, it should be expected that he would not have the decency to actually put his ghost-writer on the cover.  Instead he just emblazons the book narcissistically with his name and likeness and a self-gratifying note that "he" is a New York Times Best-Selling Author.   So I flipped through this nauseating piece of propaganda and murky history replete with lots of illustrations of bobble-headed Rush Revere toddling through history telling us what really happened.  Were this a sarcastically self-aware endeavor I could see how it could be hilariously rewriting history with a post-modern cynicism.  Instead, it's just more lazy pandering and continued plundering of the Conservative citizens's coffers to fill his already quite sizeable girth.

At the end of the book we finally get to the Acknowledgments and as Christoper Schoebinger is the only person thanked for some non-specific "assistance" I am going to climb out on my Ghost limb here and point the finger at him.  I take no issue with him for getting that paycheck.  Ghost gotta eat, right?  But someone seriously needs to stick a pin in the Rush balloon of false piety and self-righteous gluttony and pop it.

2. The second book to spotlight is  KILLING JESUS. 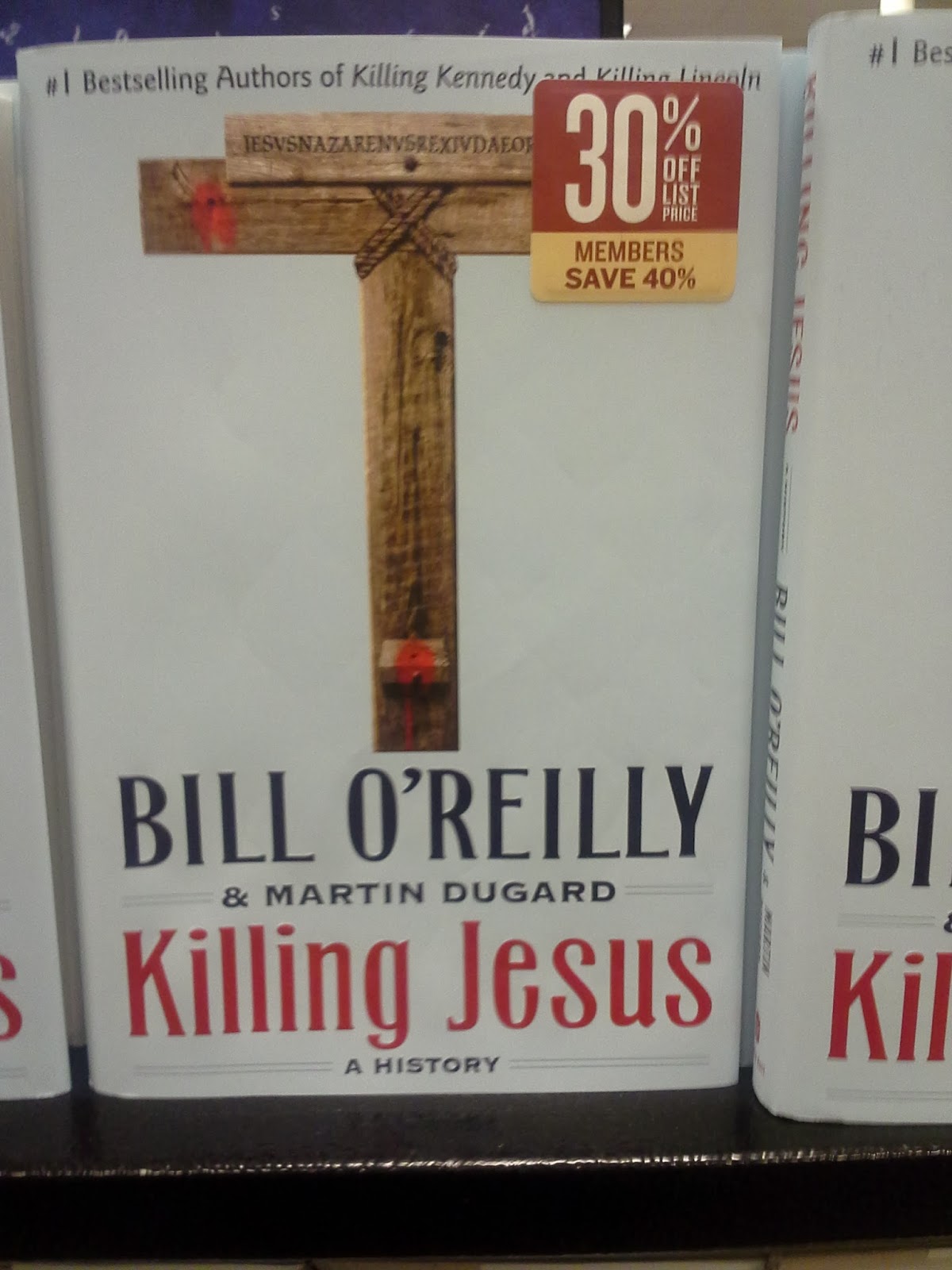 This book is purportedly authored by Bill O'Reilly as you can see by the enormous lettering for his name.  However, in teeny tiny letters under Bill's name you can see who the actual author is: Martin Dugard.  So, while Bill is taking all the credit for this book, it's Martin who gets all the blame.

I think this summary of the book from The Guardian puts it pretty well:  "Jesus, the little guy, is an enemy of the big corrupt tax-oppressing Roman empire, which is itself just a version of Washington, only even more venal and sexually depraved. This Jesus is a tax-liberating rebel who incurs the wrath of the Jewish and Roman powers by threatening their joint fleecing of the people. As a member of the populist right, he is not, of course, in favour of redistribution: Bill O'Reilly's Jesus does not tell the rich to give away their money to the poor."

Good Catholic Bill O'Reilly celebrates the birth of our peace-loving Savior by attaching his name to a cynical money-grab directed specifically at milking those in this country who feel their government is conspiratorily out to get them.  And what better way to do this than hang a government conspiracy around Jesus' neck on the cross.  Ho Ho Ho! Merry Xmas!

3. The third book to spotlight is MIRACLES AND MASSACRES: TRUE AND UNTOLD STORIES OF THE MAKING OF AMERICA. 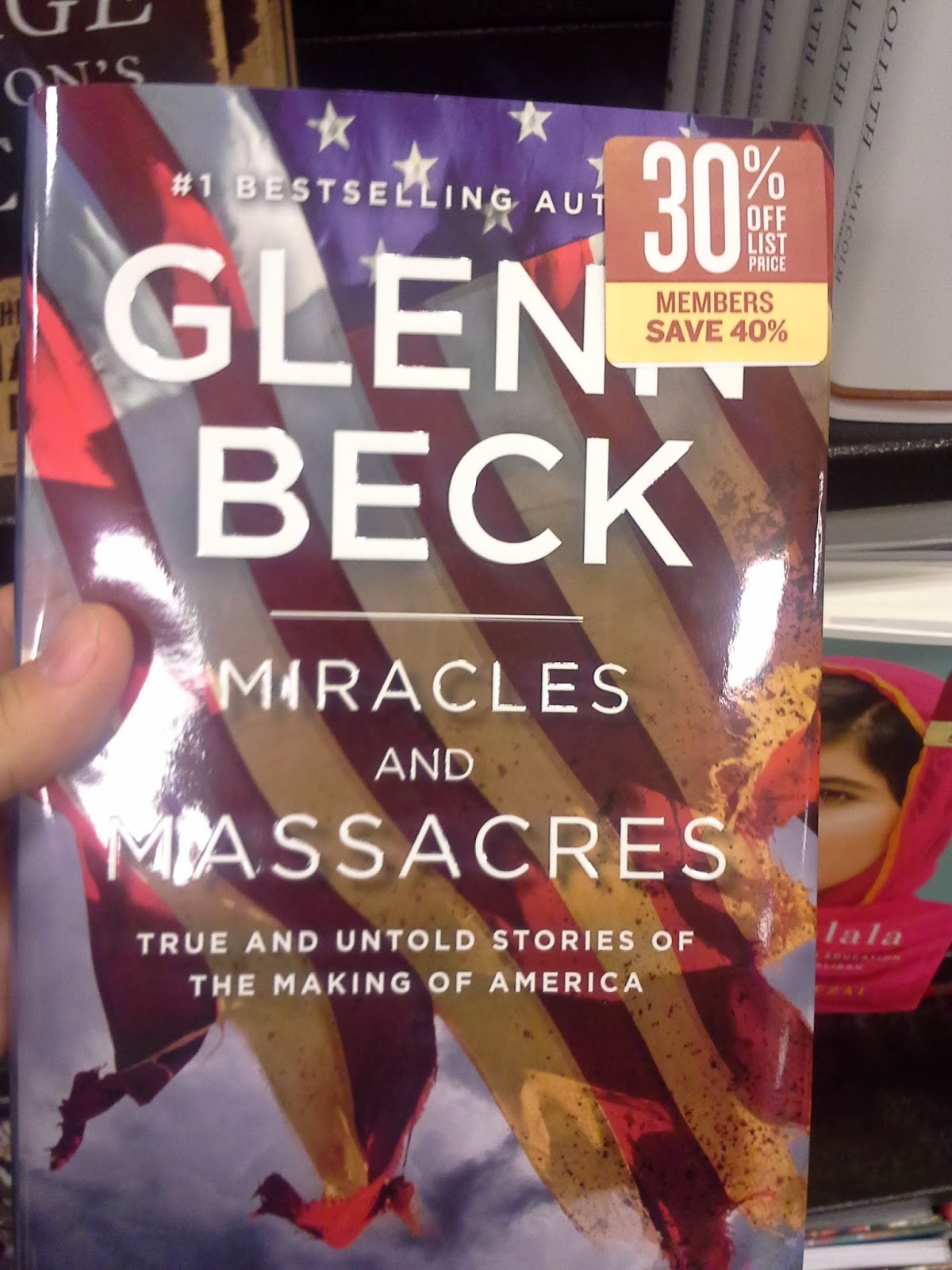 You gotta know up front that Glenn Beck rubs me wrong in every way. So the idea that he's going to slap his name on a book that purports to tell me 12 little "thrillers" as a way of learning about history turns my stomach a little.

Since I think the man to have a messianic complex and to be a functioning delusional, his idea of what he construes as "untold" stories of America immediately make me cringe at the perverted prism of reality through which he would have directed the actual author to write through. 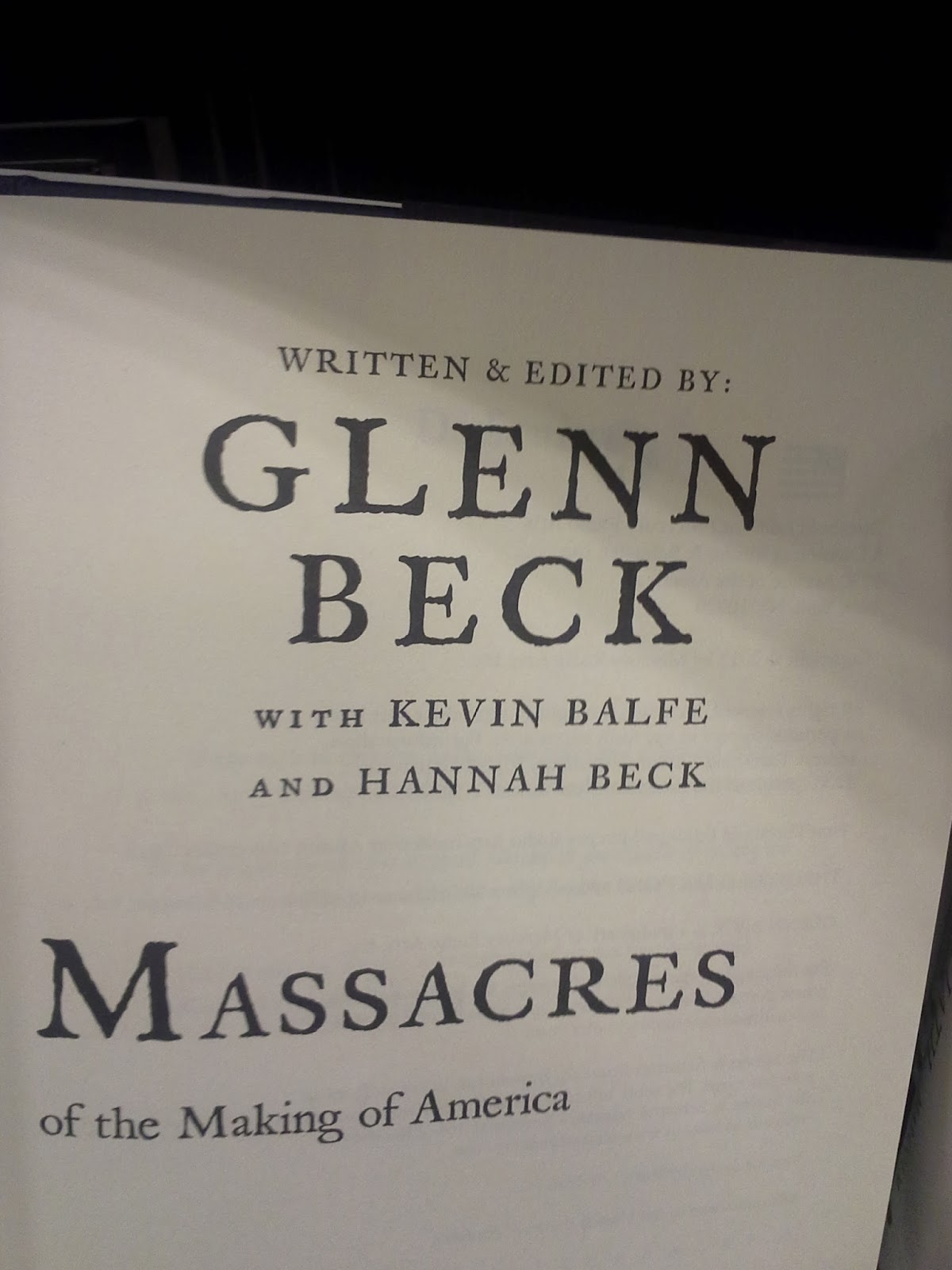 I will say this, though, I do think Glenn involves himself in the construction of these books with his name on them more than some of these others.  However, I don't believe he wrote the actual book so putting his name at the top in huge letters is a huge problem for me.

I noticed that the cover doesn't make any mention of anyone other than Glenn Beck as the author.  Nice to see good old traditionalists like Glenn and Rush are sticking to the olden ways.  But I look inside the book to the credits page and what I see is a book written by Kevin Balfe and edited by Glenn Beck's daughter Hannah and overseen (editor-in-chief style) by Glenn.


4.  The fourth book to spotlight is COMMAND AUTHORITY. 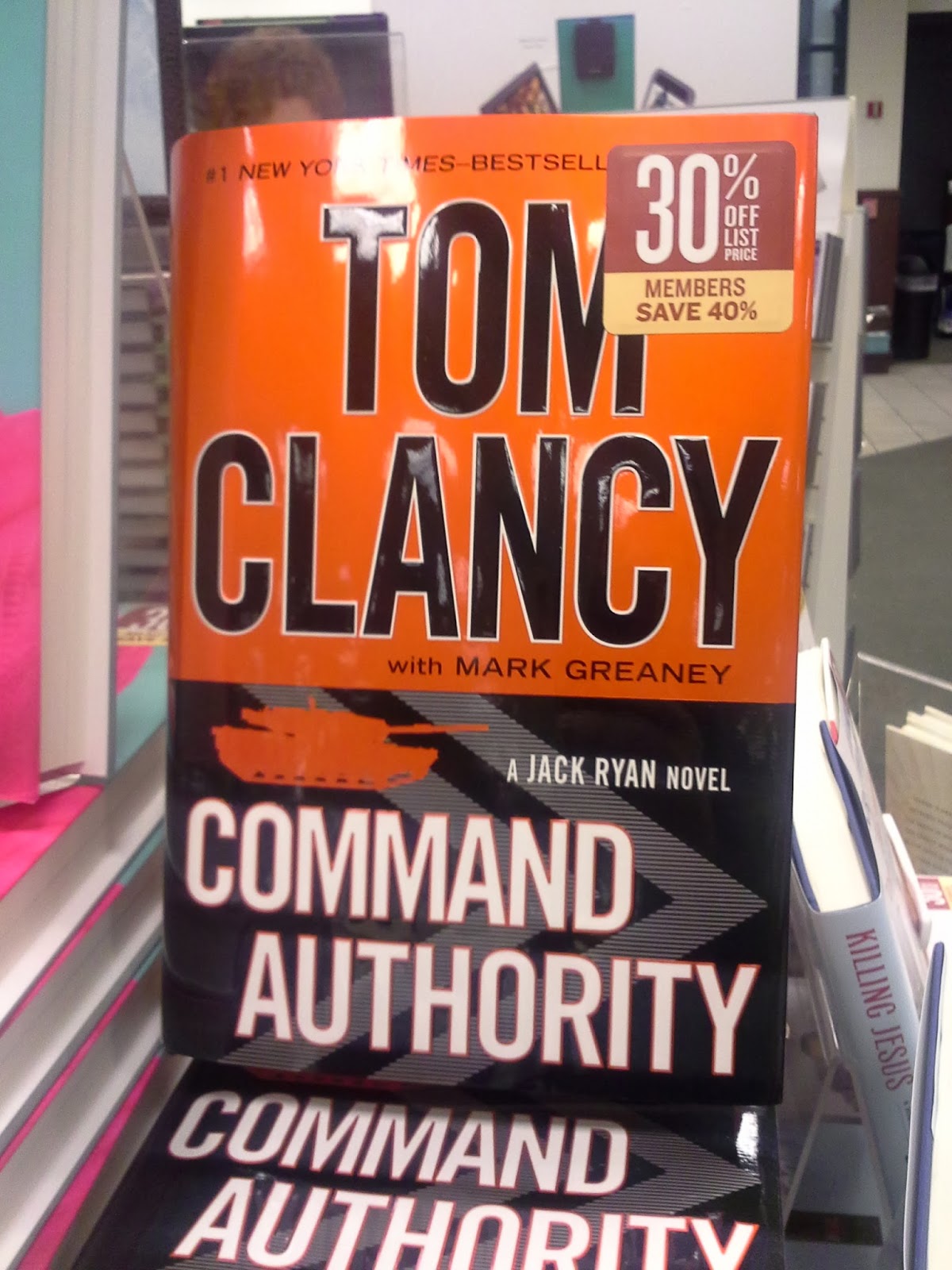 There is a new "Jack Ryan" movie coming out soon so, as one would expect. Tom Clancy's book publisher has to make sure we get a new "Jack Ryan Novel" out there to feed the marketing.  It doesn't matter that Tom Clancy died in October.

Of course, I don't think Clancy's actually written anything attributed to him as author in years, so this isn't surprising.  Mark Greaney is the author of this one.  And by all accounts, if you like this kind of book, you'll like this one.  But boy, the Tom Clancy conservative readership just keeps on sucking this stuff in like powdered candy don't they?

The further adventures of President Jack Ryan Sr. and covert warrior Jack Ryan Jr. will further titillate and tantalize those out there with thrills, espionage, and politics.  And all the while reinforcing those conservative values that we all associate with such drama and without any need for deep philosophical analysis or graphic sexual content.

5. The fifth book to spotlight is actually a couple of books together:  HAPPY, HAPPY, HAPPY: MY LIFE AND LEGACY AS THE DUCK COMMANDER and SI-COLOGY 101: TALES & WISDOM FROM DUCK DYNASTY'S FAVORITE UNCLE. 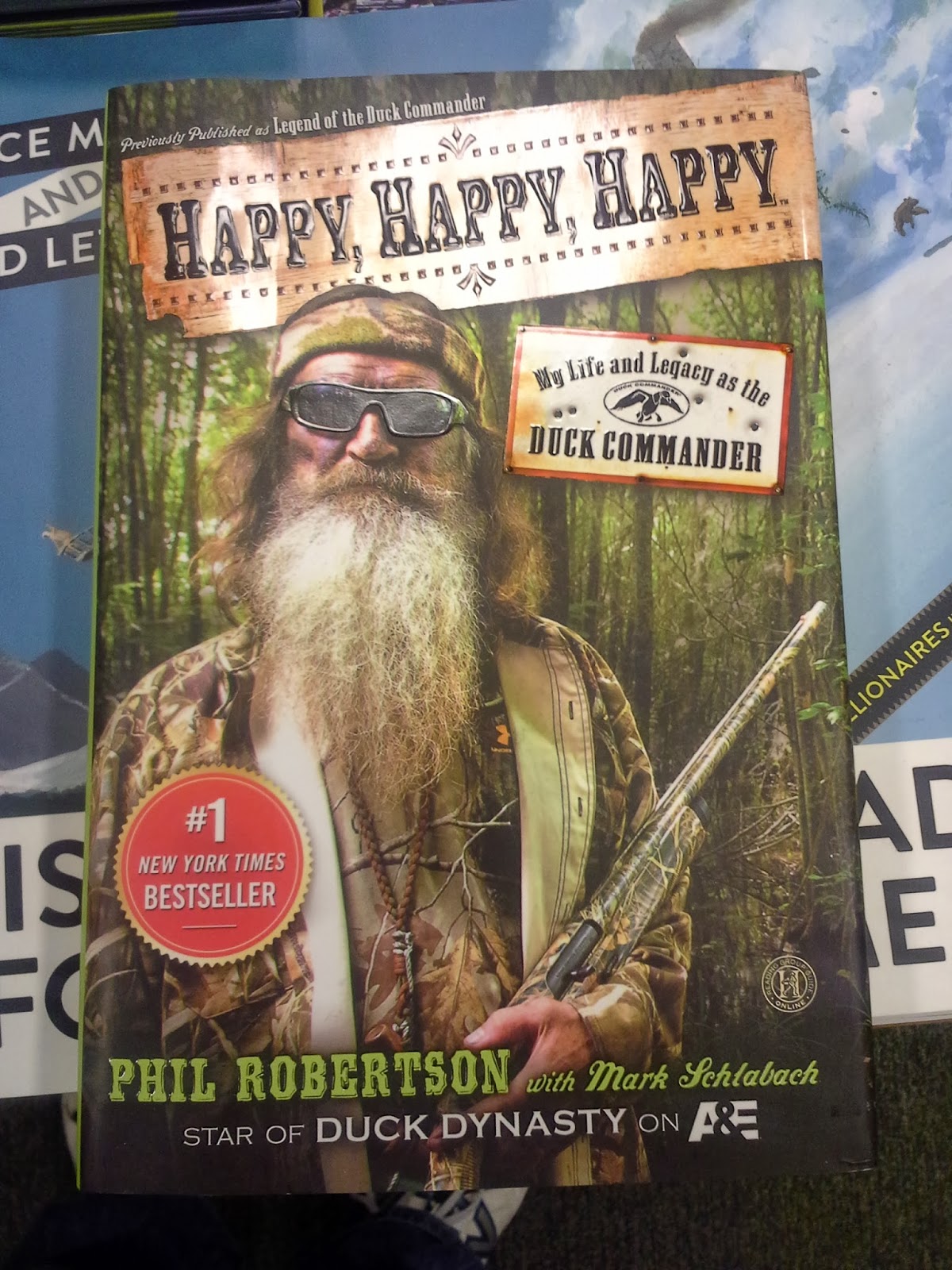 Purportedly "written" by Phil Robertson and Si Robertson, respectively, of the tv-series DUCK DYNASTY, I think the timing of these books could not be better.  With the recent controversy and removal by A&E of Phil from the show, I expect these books to be flying out of bookstores and winging their ways under Xmas trees posthaste. 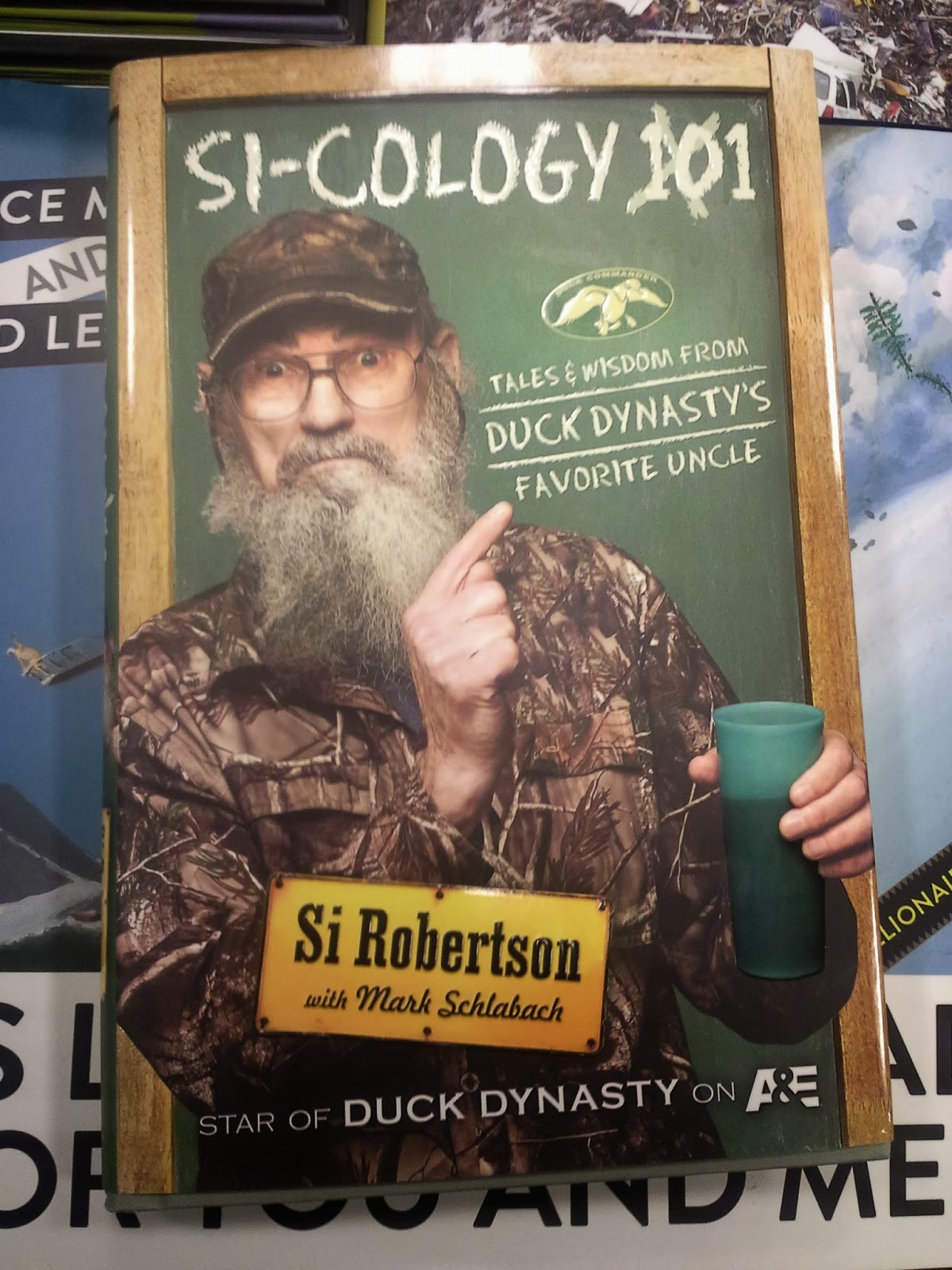 I don't think I can fully express how exasperatingly horrific these books appear to someone like me. It's like someone crafted a pander stew of everything that is intended to capitalize upon ignorance, blissful nostalgia, rubbernecking, lack of critical thinking, nonsense posited as good old "horse sense", and just a putrid air of self-righteousness masking pure money grabs.

Normally I don't assign any real malice to the ghost-writers and just assume they are doing it for the paycheck.  But in my opinion, the true author of these books, Mark Schlabach, has likely carved himself out a quaint little corner of Hell for his future by tying his present-day fortunes together with this embarrassing blip in history that is currently a painful boil on humanity's ass.

If there really is a Krampus, he's got his eyes set on Mark this Xmas.