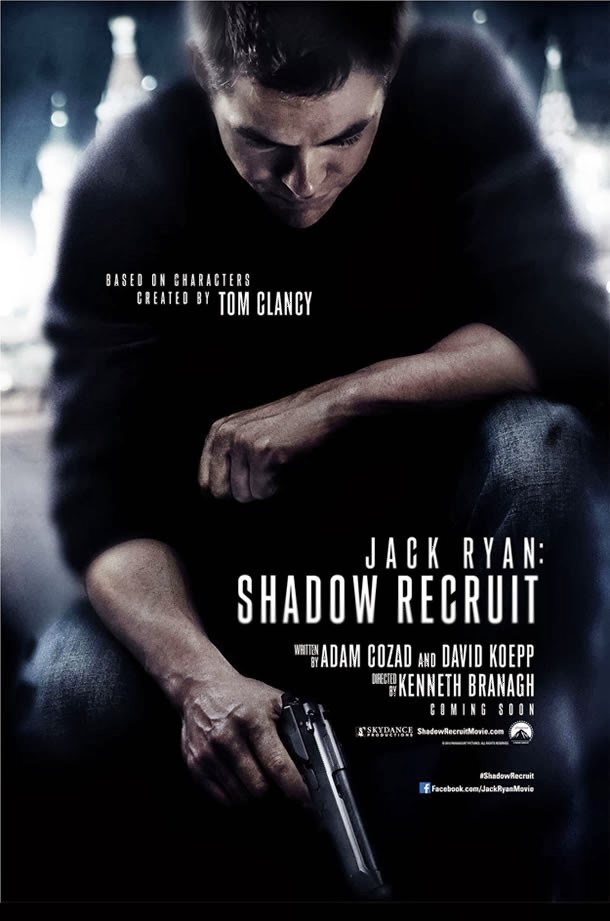 It's the battle of the facial moles. Chris Pine's enormous cheek mole versus Kenneth Branagh's 2 prominent chin moles. Guess who wins. Also, I never really noticed before that Branagh has no lips. He has a muppet mouth. I think it became more prominent in this film opposite Pine's dreamy full tulip lips....but I digress before I've even begun.

For my first foray into the world of the MoviePass, the wife and I headed out to see JACK RYAN: SHADOW RECRUIT starring Chris Pin...e, Kenneth Branagh (also director), and Kevin Costner.

I enjoyed the movie. It wasn't great tho. I surprisingly enjoyed Tom Cruise's turn as JACK REACHER last year much more. I know I've seen all the previous Jack Ryan films, but for the life of me I can't really remember anything about them other than the Russian commander's slightly Scottish brogue and an argument about the Silver Surfer in THE HUNT FOR RED OCTOBER. So, I obviously don't have much in the way of a preconception about the Jack Ryan character and that's probably good. It means I can kind of walk into this film without the extra baggage of whether it's "true to the character" or not.

Taken on its own merits, it's a decent action flick but honestly it's probably about as forgettable in the end as the previous ones were for me. I'll certainly remember it fondly as my first of a year of MoviePass flicks though.

Everything about the movie was pretty much just a modern-era, cookbooked action thriller without any real stylistic flourish. One of the things that makes the BOURNE movies and the MISSION IMPOSSIBLE movies, and especially the last 3 BOND films with Daniel Craig, stick with me is that director's touch that sends them over the edge of just a run-of-the-mill action adventure. So, I'm gonna say overall I was a little disappointed in Branagh as director here. I wanted the sharp and creative director of DEAD AGAIN and HAMLET but I got what felt like a paycheck job to me. But even a paycheck job is good....it just wasn't spectacular.

Most of the action sequences were pretty much standard fare -- cars sliding sideways, implausible diversions through crowded streets, Ryan himself displaying Bourne-level abilities of endurance and strength but at least they bloody up his knuckles occasionally. No matter how absurd the action gets, including that current film-makers' favorite -- the hero falling out of a speeding car onto the asphalt and not killing himself OR demonstrating any injury other than a bruise or cut -- Chris Pine once again conducts himself with confidence, charm, and charisma. He has old-school movie star written all over him and I just plain like him in anything and everything.

Kevin Costner redeems his asshole turn as "Pa Kent" in MAN OF STEEL with a strong and subtle performance here as Ryan's CIA recruiter. I didn't care for the actress who played Ryan's fiance' and I didn't feel the two of them really had chemistry together -- meaning I didn't really feel like they were in love. They basically could have done this story without her and I think it would've been stronger, but I'm sure the studio wanted that relational aspect to draw in female viewers.

I liked how it focused on terrorism the way that it did and I also liked using the Russians as the villains of the piece. It had a Cold War feel to it, but set in the modern paradigm with the financial marketplace. In that regard, the script was pretty smart.

I liked it. Whether you would like it probably depends on how critical you turn your eye towards your thrillers and what level of preconceptions about Jack Ryan you bring to the film.