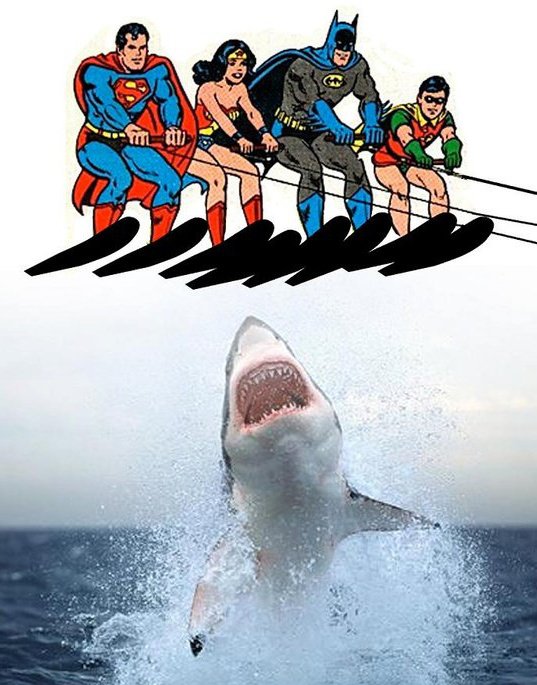 DC Comics has "Jumped the Shark" if this interview found on the Comic Vine website is to be believed.  I think I have been granting DC too much credit and optimism.

CV:  With the introduction of 52 new #1 titles this fall, how did the decision to revamp the entire DC Universe come about? Why now?

Eddie: It's been planned for a while, like Bob said. Why now? Because we looked at all the platforms available. We want to embrace the future, and what better time to do it than now?

CV: What are your goals for the revamp?

Bob: We want to create exciting comics with great story and art- that's always [been] my main goal. But really, we want to get people excited about these properties and get more and more people reading these characters because these are really incredible characters, and I think Eddie shares in these feelings.

Eddie: We grew up with these characters and they've touched us in so many different ways. Now we want to make that accessible to more people by having them on different platforms.

CV: Eddie you bring up different platforms. I know that Bob, when you were at Marvel, you once published a Marvel comic in a TV Guide. Other than digital, do you guys have other platforms you plan to utilize to target new readers?

Bob: We're focusing on digital. Digital is the main goal because we really do believe that's where more and more people are getting their entertainment.

CV: Are you at all afraid of alienating your core fan base?

Bob: I think we're always concerned, and we have no intention [to alienate our fan base] but the thing we want to stress is that we want to get people excited again about these characters. One of the things we're doing is [we are] incorporating some stories from the past that are very important [to the characters] for September going forward- we've taken a lot of care to create a timeline to explain the reasons why this is happening. We've taken into account a lot of important story lines; Death in the Family, Blackest Night, The Killing Joke and Identity Crisis.

Eddie: I mean we're both fans and we recognize that these stories really had an impact. It also gives us a new direction to go from.

CV: Part of the revamp is giving characters new identities. I know that in the solicit for the upcoming Supergirl series, she seems like a completely different character...

Eddie: Well she's still the same character, we're just going down to her core. Looking at the characters at their core, looking at them in these new situations that we're creating and seeing how they would react to other characters. We're taking everything back to 'who is this character, how would he or she react to certain situations,' and that's really how we developed some of these new directions.

Bob: We've also been very conscious of making this reality for the real world. Like, what would the reaction be of people coming from outer space with these powers? It's not all gonna be welcomed. So that's the challenge these heroes are faced with and the fact that they continue to be here is the story we're striving to tell.

CV: One character that's gotten a lot of attention recently is Barbara Gordon. Can you talk about the decision to make her Batgirl again?

Eddie: It all came from the core of her character. Where can we take Barbara Gordon where we haven't taken her before? That's what we wanted to deal with by taking her in this new direction.

CV: Why the decision to bring many classic characters, like Swamp Thing, back and to the forefront?

Eddie: We love these characters. We think these are fantastic characters and we want to share them with a broader base of readers. There's a lot of potential for story . We're at the beginning of being able to explore them fully and do it before a broader audience.

CV: Will we be seeing Power Girl in the future?

Bob: Yeah, she'll be around.

CV: But not in her own title?

Bob: No, she won't have her own #1 title, but Karen Starr will appear in one of the 52 titles.

CV: Rumor has it Lois Lane and Superman won't be together after this revamp. Can you confirm or deny?

Bob: You'll have to read the Super books to find out!

CV: Action Comics just celebrated it's landmark 900th issue in June; any chance DC will renumber the series again when it hits issue 1000?

Bob: No plans for that. We're moving forward starting with September's #1's.

CV: What's the future of Batman Inc.? Is it over or will DC return to that story?

My thanks to Rich Johnston and BleedingCool.com for pointing out what was not only not answered, but not asked!

Eddie Berganza and Bob Harras both did interviews together for iFanboy, Newsarama, Comic Vine, CBR and The Beat, all released within minutes of each other. And both managed to say very little indeed.

That it’s not a complete reboot of continuity. Which we knew.

That past continuity will still count. Which we knew.

That they’ve been planning it for a while now. Which we knew.

There’s one point from The Beat interview where Eddie Berganza talks about “a timeline we’ve created, that’s a living breathing artifact” and I really hope he means it in the same way Grant Morrison means it. But I sadly doubt it.

The interviews smack of being managed and even when harder questions are asked, they are generic enough that Bob and Eddie slip away from them without being challenged further.

So here are eight questions that weren’t asked or that they didn’t answer. Any suggestions as to the responses I may have got?

1. In DC comic books published last week, 11% of named creators were women. In the relaunch, 2% were women. Is there a reason for this change?

2. What percentage of current comic book readers do you expect to be cannibalised by day-and-date digital?

3. Day-and-date digital has timeliness demands for content approval that print does not. Editorially what can you do to keep the books in time without bringing in fill in artists?

4. We’ve seen the DC memo that tells artists they must have three issues completed by the end of August or you will have to bring in fill in artists, Considering some only just got the first issue script, is this a realistic achievement?

5. Certain creators have stated they they were told they were working on the book, only to find out days before the DC Relaunch that they were not. This may not have been reflective of the general experience, but do you consider this acceptable man management?

6. What are the measurements for failure of the DC Relaunch?

7. How do you believe the success or failure of the Green Lantern movie will impact on the relaunch?

8. Can you please stop putting those Green Lantern banners on Vertigo titles?