The media blitz over the “New” Spider-Man was something that caught my attention and made me interested in trying out this series.  The thing about “reboots” and “alternate worlds” that appeals to me is that the conceptual rules should be able to be thrown out the window.  When the Ultimate Comics line was first announced, I didn't like it because with the SPIDER-MAN book that kicked it off, there was not much changed in any substantive way as far as I could tell.  In other words, from my point of view, it became a pointless appendage to the other SPIDER-MAN titles.  If Peter Parker is essentially going to be the same person he is in the regular Marvel titles except that he's a little younger, I don't see the justification for the ULTIMATE SPIDER-MAN comic book.  At least when THE ULTIMATES #1 was published, I began to get a better sense of Marvel accomplishing what they claimed to be doing with the Ultimate line of titles.  But ULTIMATE SPIDER-MAN's appeal continued to elude me throughout the years.   It took them 10 years to get to a point with the ULTIMATE SPIDER-MAN title to pique my interest and that was the death of Peter Parker and now the relaunch of the title with a new youngster, Miles Morales, taking up the mantle of Spider-Man in the Ultimate Universe. 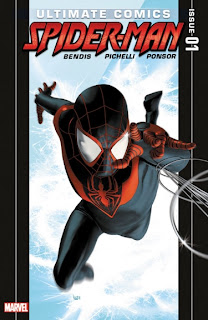 Finally, they are taking the bull by the balls and doing something that takes full advantage of the freedom inherent in an “alternate” universe and I am here to read it and fully expecting to enjoy it.

I've read it. Now, let's talk about it for a little bit.

Right off the bat, let me state, Brian Bendis is clearly a talented writer and Sara Pichelli is a good artist and visual storyteller. However, I just have to say I can not seem to muster any appreciation for the way that Bendis structures and paces his stories. I've noted it before with other comics, but I find every Bendis comic I've read to be a ponderous chore to sit through. So, as a general rule, I tend to avoid them. Here, though, I was hoping that there would be an enthusiasm on his part in introducing his new character to the world that would be infectious and pull me in. There are some positive things about the comic, but overall I was underwhelmed and disappointed.
The basic gist of what happens, for those who want the spoilers, is the cover showcases the “new” Spider-Man costume.  You open the comic to a scene from 11 months ago to show how genetically modified spider #42 got loose from its box in Norman Osborn's laboratory.  Jump to current day and, someone I assume from his costume to be, the “Ultimate” Prowler is breaking into a vault at the abandoned Osborn lab to steal money and valuables when spider #42 hitches a ride in his bag.  Jump to Brooklyn and meet middle school student, Miles Morales, who is waiting with his parents to see if his lottery number, 42 (naturally), gets pulled granting him entry into a fancy, schmancy charter school.  I'll let you just take a guess about whether his number got pulled.  Miles heads over to his ne'er-do-well Uncle Aaron's apartment to hang out.  Aaron is apparently also the “Ultimate” Prowler and Miles goes snooping through his goody bag and gets bitten by spider #42, has a seizure, and passes out.  Miles' dad comes over and lays in to Aaron, blaming him for whatever just happened to his son.  Miles runs out of the apartment and then finds himself on the last pages standing outside but his body is, sort of, camouflaging itself against the concrete and graffiti and he looks at himself and says “Whoa.”

That's it in a nutshell.  It ends rather abruptly.  Almost like you're watching a tv-show or movie and the power goes out right in the middle of it.  It didn't make any structural sense to end it like that and made me immediately go back and count the number of pages because I thought I must have missed something.  Nope.  20 pages of story at $3.99 and cut it off right in the middle of the story.  Now I understand why they wrapped the comic in plastic – so nobody could thumb through it and, y'know, know what they were buying. The rest of the comic was a 9/11 reprint.

That was a burn that makes it highly unlikely I will be picking up the next issue because not enough happened in this comic to make me actually give a damn about Miles Morales.  In AMAZING FANTASY #15, Stan Lee and Steve Ditko pulled in the reader in 11 pages and made them care enough about Peter Parker to justify spinning the character off into his own title and now he is one of the most famous fictional characters in history.  At the laborious Bendis-pace, there's no telling when we might come to care about Miles.

The art by Pichelli, is good for what it is.  Unfortunately, it's that dull, static, storyboard-style storytelling that Bendis seems to demand of his artists and I think this artist has the ability and the talent to really take this story up a notch in terms of drama and excitement if she wasn't so bound by these thick black rectangular borders that are restraining the action.

I'm not hating on it in general.  Conceptually, I think the idea of a poor brilliant Brooklyn kid with an uncle who's a thief with a heart of gold, is a good foundation for building a new twist on the Spider-Man legend.  I didn't care for how it unfolded.  I also thought the manner in which the spider escaped and got to Miles in the first place was especially hackneyed.  I would've liked to have seen some better connection to Peter Parker than an Osborn spider that just happened to sneak out of a box because a scientist was distracted.  I was imagining something more along the lines of a kid a bit older than Miles in this comic perhaps hacking his way into an online folder where Parker had kept an encrypted file with details about his biological transformation, blood details, formula for webbing, etc.  Then watch this kid get to work and break the encryption and yada yada yada, driven by some plot device (family in danger, or something like that) to subject himself to, oh, maybe an untested spider-serum or something.

No such luck.  Instead we get what we got.  Maybe it all reads better in the final trade collection, but as a first issue of an ongoing series it was a nice-looking package but wafer-thin on content and a truncated story.   Definitely not worth $3.99 by any stretch, even with Bendis's HITCHHIKER gag use of the number 42 – the answer to the “Ultimate Question of Life.”  Ha.......ha.