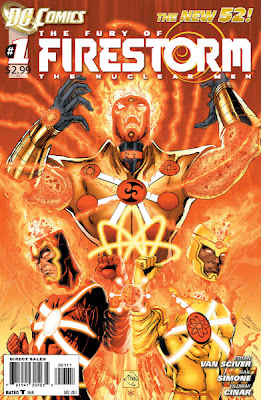 “You jerk! You want to say this crap to me? Say it to my face, you geek loser! Come on, right now!” — Ronnie Raymond

So far, all but 2 of “The New 52” that I've read (admittedly a small number) have not started from scratch with a standard first issue “Origin” story, but picked up on the character already in existence. THE FURY OF FIRESTORM: THE NUCLEAR MEN is one of them (OMAC is the other one, if you're curious). Annnnnnd, since I happen to own a copy of the original FIRESTORM: THE NUCLEAR MAN #1 from 1978 (and it was easy to grab), I will be following up this review with a short “Bonus” review of that comic as a comparison. Since both are the “first” appearances of the character in their respective continuities, why the hell not take a look at both of them?

I didn't care for this comic very much. It is functional but not very enjoyable, and in parts, really irked me. It started with the opening sequence with a group of white, racist terrorists trying to get their hands on a macguffin and proceeding to assassinate a Middle Eastern family (parents and kids) in Istanbul. [“MacGuffin” - noun - \mǝ-'gǝ-fǝn\ : an object that serves to set and keep the plot in motion...”]

They, of course, hate each other. Primarily because Jason is one of those kids who hates the sports kids and promptly starts intimating that Ronnie's a racist. Ronnie is one of those kids who tires of people making presumptions about him because he's a football star...and now...thinks he's a racist. Reminds me of when I got drug to a PromiseKeepers Rally many years ago and the guy on stage spent most of the time informing me and the thousands of other guys there that we were all racists...even if we didn't know it. Wha-huh? Anyway, while we get glimpses at these two boys' personal lives, the visual parallels between the two of them are highlighted with side-by-side panels and internal monologues (Ronnie's in red bubbles and Jason's in yellow). Both just met each other and both think they know what the other kid is all about. The truth is that they're a lot more like each other than they realize (a couple of arrogant pricks, actually) and circumstances are about to bring them a lot closer to each other than they're going to want.

The terrorist group tortures then kills a scientist at a Swedish supercollider and we start getting some indication of what the macguffin is – some kind of powerful something or other having to do with “The Firestorm Protocol” and toss in some tantalizing references to a missing scientist named Martin Stein. Visual indications are that there are various countries with their own top-secret “Firestorm” individuals (I noted China, Japan, and Russia. Not sure of the other countries).

Naturally, even though nothing in the story leads the reader to understand why, the terrorists “know” that the missing piece of the puzzle is at....Walton Mills High School! The timing couldn't be more perfect for them to break in to get it while both Ronnie and Jason are there. And, like any good high school student with a top-secret “magnetic bottle” containing highly radioactive material that “inhibit[s] the decay of gauge bosons...[changing] quarks of one flavor to another,” HE HIDES IT INSIDE HIS HIGH SCHOOL LOCKER!!!! By the way, that stuff about quarks and bosons means it has the ability to transmute elements. Now we get it. “The Firestorm Protocol” is some kind of global top-secret experiment involving transmutation of matter predicated upon the Higgs Boson, or “God Particle” and is functional only with a genetic match. Makes total sense. Trekkies probably understood that techno-babble, but I doubt anyone else did.

But, really, isn't the whole thing just an excuse to get Ronnie and Jason to fuse together into Firestorm? Well, of course....and that happens....sort of. As the cover that makes my eyes bleed reveals, the two of these guys actually co-exist as separate mirror-versions of each other as Firestorm but they can also fuse together into one massive giant Firestorm who calls himself “Fury” and talks like a tough-guy asshole saying things like “The 'guys' are gone forever, Sweetcheeks. Say hello to Fury.” *facepalm*

I think the broader concepts are sound. The idea that “The Firestorm Protocol” is a global project with multiple competing countries experimenting with this powerful weapon is a strong premise. The pettiness of the two unlikeable lead characters and the “Fury” aspect really turned me off. I am usually a fan of the work of Gail Simone and Ethan Van Sciver and I appreciated Yildiray Cinar's work on LEGION this past year, but I didn't enjoy this comic.

It has potential in the concept, but this went off the rails a number of times and never really righted itself. 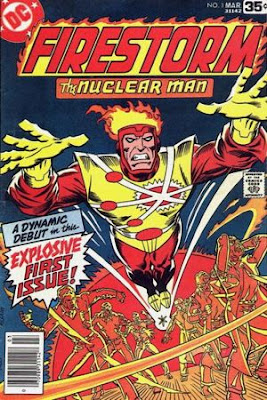 “Wowee! If the kids at school could only see me now! I haven't felt this good since I made the winning touchdown in the championship game with Central High!” – Ronnie Raymond (Firestorm)

The cover, by artist Al Milgrom is simple but it is much more dynamic than the static, posed, over-colored and over-f/x'd cover of the 2011 cover. The 2011 series involves a global terrorist group led by Cliff Carmichael who slaughter their way to a high school in pursuit of some important canister that ignites and joins 2 teenagers together both separately and joined as Firestorm super-heroes.

The original version of the character premiered in 1978 and was smack dab in the middle of the oil crisis and widespread fears of nuclear power (the Three-Mile Island meltdown was right around the corner). This comic also featured terrorists. Not the kind of terrorists who put a gun to the head of a little boy and shoot his head off after making him watch them first kill his family. No, these are 70s-style terrorists with curly perms, muttonchop sideburns and sticks of dynamite. In fact, the comic begins with Firestorm already in action taking on a group of thugs trying to blow up a nuclear power plant in New Jersey with a stash of dynamite. Then it does a quick flashback to the circumstances surrounding how Firestorm came to be here in the first place.

So, the flashback machine takes us to the high school where new transfer student, and football player, Ronnie Raymond is experiencing his first day in a new school. Instead of Jason Rusch, the antagonist in this comic is “Cliff Carmichael,” who is NOT a terrorist here but, rather, an annoying little shit who relentlessly picks on Ronnie. In this scenario, Ronnie is a jock but Cliff is the smart nerd who lords his brains and cutting wit over the “big dumb jock.” It is an amusing twist on the usual scenario of the jock picking on the smart kid.

Ronnie is much more likeable in this story than in the new version, and the reader is more empathetic to his situation as the new kid in school. Cliff is the guy we all want to just punch in the nose. Which is exactly how he should be. He's not the hero, he's the foil.

The Coalition to Resist Atomic Power is protesting the opening of the Hudson Nuclear Power Plant, where Prof. Martin Stein hangs out as the physicist who designed the installation. In the "New 52" version, Martin Stein is so far just a mysterious name. Here, he is an angry and irritable man who presents a very unlikely and intriguing pairing with the youthful, non-intellectual, Ronnie. The Coalition is really just a front for an anti-nuclear power terrorist group who breaks in to the power plant with some dynamite to blow it up and make everyone see the danger. Inexplicably, that explosion fuses Ronnie (who shows up at the plant at just the wrong time) with Prof. Stein and gives them the power to transmute elements.

With Ronnie's football player physique and Prof. Stein's brilliant mind plus fire hair and a puffy-sleeved shirt, they embark on a new career as the powerful nuclear-powered “Firestorm.” The terrorists at the Jersey power plant are, of course, the same group that tried to blow up the power plant.

The story follows some basic Silver Age tropes such as name alliteration (i.e., Ronnie Raymond, Cliff Carmichael, Doreen Day), villain set-up, and stylized soap-opera relationships and dialogue. However, there is real dramatic tension without imposing any social or political agenda. The anti-nuclear group are the villains of the piece, but it never feels like any judgment is being pushed on either side of the issue by writer Gerry Conway. The look of the Firestorm character is really bizarre by any standard and, yet, I've always liked it. Even when I was 12 years old.

Milgrom's work on this comic displays elements of both Ditko and Kirby in it. It doesn't always work, but for his pencil work (Milgrom is more known for his inking and editing work), it's pretty strong in terms of selling the narrative while limited in terms of actual drawing ability. The inks by Klaus Jansen and Josef Rubinstein are solid and help out a lot, although Jansen and Rubenstein are not similar in style at all.

Of the two, I definitely enjoy the original FIRESTORM #1 over “The New 52” version, but even with that I will admit it's pretty lightweight. But at least it is fun. The new version is not very fun at all.