Yes, it is true.  In the April 1, 2005 edition of WIZARD Magazine the following feature appeared from reporter Chris Ward: 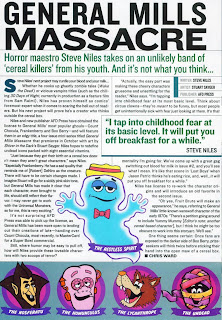 Horror maestro Steve Niles takes on an unlikely band of 'cereal killers' from his youth.  And it's not what you think...
Steve Niles' next project may curdle your blood and your milk...

Whether he cooks up ghastly zombie tales (Wake the Dead) or vicious vampire titles (such as the chilling 30 Days of Night, currently in production as a feature film from Sam Raimi), Niles has proven himself as comics' foremost expert when it comes to scaring the hell out of readers.  But his next project will prove he's a creator who thinks outside the cereal box.


Niles and new publisher AFD Press have obtained the license to General Mills' most popular ghouls -- Count Chocula, Frankenberry and Boo Berry -- and will feature them in an edgy title, a four-issue mini-series titled General Mills Massacre that premiers in October with art by Shiver in the Dark's Stuart Sayger.  Niles hopes to redefine undead icons packed with eight essential vitamins.

"Just because they got their birth on a cereal box doesn't mean they aren't great characters," says Niles.  "Especially Frankenberry.  He has a sad quality that reminds me of [Robert] DeNiro as the creature.  There will have to be certain changes made.  I imagine Stuart will go for a sickly pink skin tone, but General Mills has made it clear that each character, even brought to life, should reflect their flavor.  I may never get to work with the Universal Monsters, so for me, this is very exciting."

It's not surprising AFD Press was able to pick up the license, as General Mills has been more open to lending out their creations of late -- handing over Count Chocula, most recently, to MasterCard for a Super Bowl commercial.

Still, where humor may be easy to pull off, how will Niles provide these loveable characters with two scoops of terror?

"Actually, the easy part was making these cheery characters gruesome and unsettling for the reader," Niles says.  "I'm tapping into childhood fear at its most basic level.  Think about circus clowns--they're meant to be funny, but most people get unintentionally sick with fear just looking at them.  It's that mentality I'm going for.  We've come up with a great gag switching out blood for milk in issue #2, and you'll see what I mean.  It's like that scene in 'Lost Boys,' when Jason Patric thinks he's eating rice, and, well...it will put you off breakfast for a while."
Niles has license to re-work the character origins and will introduce an old favorite in the second issue.

"Oh yes, Fruit Brute will make an appearance," he says, referring to General Mills' little-known werewolf character of the early 1970s.  "There's a petition going around to include Yummy Mummy [Editor's note: another cereal-based character], but I think he might be too obscure to work into this story arc.  We'll see."

One thing seems certain:  Once fans are exposed to the darker side of Boo Berry, prize-seekers will think twice before sticking their hand into the open maw of a cereal box.