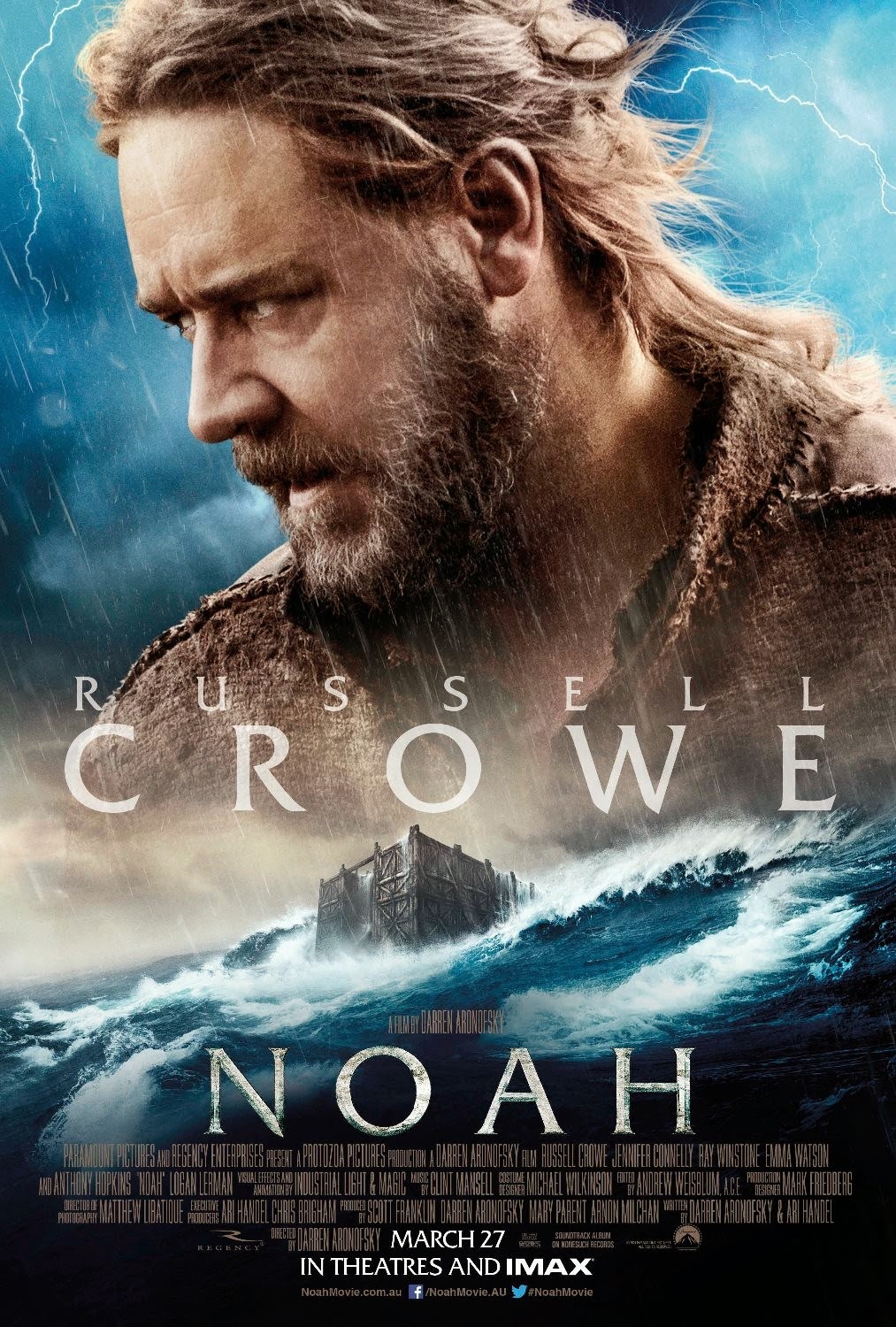 No matter who you are, please for the sake of sanity please leave your literalist Bibles at home if you choose to go see this movie. Otherwise, you ...will be driven as mad as Noah trying to find ways to reconcile the film with your Biblical flood narrative. This is a grand old myth that exists within many pre-historical mythological narratives and assigning the main characters the names and general lineage from the Biblical account is merely usage of the familiar in telling an archetypal epic. Ultimately, this film is a sci-fi epic exploring themes of faith, madness, obsession, redemption, forgiveness, and most of all....free-will, or our choices as humans and the consequences.

I know of no way to really discuss this movie without talking about specifics, so here come the spoilers. I'm very familiar with the Biblical tale and in my opinion that was an intruding detriment to my ability to get caught up in the story at first. I had to consciously tell myself to stop comparing what I was seeing to what I was familiar with. What helped me do that was changing my viewing paradigm. Instead of seeing the story of the Biblical "Noah," I chose to view it as a post-apocalyptic sci-fi epic set on another planet. Once I did that, then I settled in nicely. The cause of my unease had to do with this post-industrial society in which "fallen angels" had surrounded themselves with a cloak of "earth" so that they are walking around as 20-foot multi-armed rock monsters who interact with and attempt to help the humans. There's a bit of a nod to the Prometheus myth here as some of how they seem to help is providing mystical source material for humans to wield fire.

The story that director, Darren Aranofsky, is telling is a story much more personal than just the story, or myth, of the Ark. Just like MOBY DICK is on one hand a story about a Captain chasing a whale, it is even moreso a tale of obsession and madness -- this film is less a story about God's dissatisfaction with man and his dramatic method of cleaning up mankind's mess; it is a tale of obsession and madness. Noah becomes progressively more unhinged as the years go by and slips into a post-traumatic survivor's guilt-induced madness. He does not see himself as deserving of the gift of continued life given him by the Creator (they never call God anything other than "The Creator"). The evil and wickedness of man is driven home in disturbing ways as we see the debauchery and even cannibalistic lifestyle of Tubal-Cain's kingdom. Tubal-Cain represents the worst of mankind with his focus on self and manipulative treachery. He revels in his wickedness. Noah is tortured by his own human nature but driven by a desire to deny himself in service of others -- a self-less love. Yet, all he sees is his own wickedness and questions why the Creator would use him rather than destroy him.

In this story, God never speaks directly or audibly. The Creator speaks through miraculous intervention; through dreams; through circumstance; through events others might see as coincidence. It's a very interesting way to approach it and is indicative of the struggles that even the most faithful have in trying to know the will of God when their God does not speak directly. In Noah's case, the frustrations build. Even the "Watchers" (the name given to the fallen angels) state outright that the Creator is silent "as always." But the key point to this is that were the Creator to speak directly then Noah's free will would not be an issue in play. He would just be following instructions and this is not the story that Aranofsky is telling. Aranofsky is telling the story of a prophet who is trying to interpret the Creator's intent through his own flawed perceptions. As a result, he understands some of the broad strokes of the Creator's plan: (1) man's wickedness has grown to such a degree that they are deserving of nothing but mass genocide, (2) the rest of Creation is undeserving of death and needs to be preserved, (3) Noah and family must build a sea-faring ark to save the animals. Noah misses the most important element in the equation, however, and that is the "why" it is him and his family that were chosen.

Most of us are familiar enough with the basic narrative to expect that it should be obvious that Noah and his family are the avenue to repopulate the planet afterwards. However, what if the only female of child-bearing age who makes it onto the ark happens to be barren? What is his purpose then? Why is Noah chosen if the end result is hopelessness? He has trusted the Creator to provide and yet all seems to be pointed to utter destruction of the human race.

And therein lies Noah's ultimate descent into madness and loss of faith even in the face of the miracle of the Creator's active hand in bringing all of this into being in the first place. There finally comes a moment where he faces the breaking point between blind obedience to a flawed understanding of God's will and love.

In the end, there are subtle hints throughout the film that this is not the primordial world we think it is but actually in the far, far future post-Apocalypse. In that sense, I immediately had a PLANET OF THE APES feeling about it. The twist in PoTA that this planet was actually Earth the whole time is like the twist of thinking this is pre-history when it might actually be post-history. The most explicit evidence is a retelling of sin and it's impact on man throughout "history" leading up to this moment and in the silhouette of man killing man we start with Cain killing Abel and then it moves through time in the silhouette eventually reaching modern day weapons. It's symbolic, but considering the context of wiping out mankind because of our wickedness but with the dangling hope of Noah's family providing a new beginning, it becomes a very important moment as those silhouettes would be projecting just a repeat of the same in the future and make the entire story pointless. To me, the movie becomes a tale of the cycle of life, death, and rebirth. In that, it is truly mythological and meaningful to our current state of being.

The effects are good and in some cases truly spectacular. Russell Crowe acts his ass off as Noah. His emotional journey could've been way overdone but Crowe gave him a real sense of truth and reality. I could feel him as he tipped over the edge of madness. Ray Winstone's Tubal-Cain was less nuanced and did go over the top a few times. The weakest member of the group was the actor playing Noah's son, Shem. But that weakness was less about his acting and more about his hair and beard. It was too well manicured and seemed out of place up against Noah's more natural hair growth. His brother, Ham, never really gets on board with Noah's mission and gets more and more estranged from him. Jennifer Connelly and Emma Watson do quite well with what they are needed to do as Noah's wife and his daughter-in-law respectively. Anthony Hopkins plays Noah's grandfather, Methusalah, and has a wonderful moment as the floods begin that made me tear up.

The more I reflect back on it the more I like it. It's a powerful film that resonates with me on a number of levels. If you're looking for a retelling of the Biblical flood narrative then I don't recommend this movie. If you're looking for a powerful science-fiction epic that addresses universal themes in an entertaining and creative way then get a bucket of popcorn and sit back for an interesting and engaging ride.