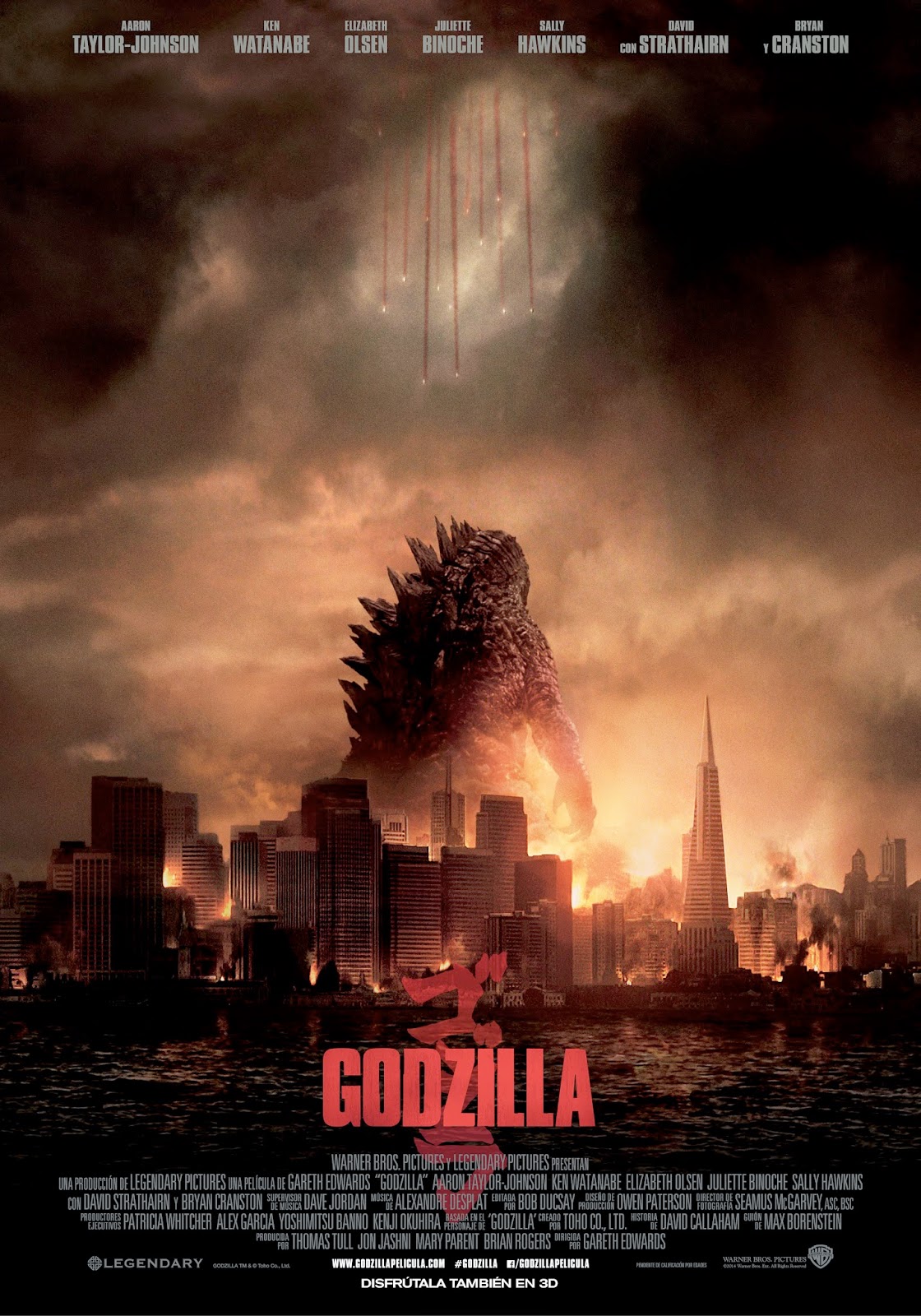 Giant monsters tearing up Japan, Hawaii, and San Francisco with crazy good special effects.  That's about all you need to know in this reboot of the GODZILLA franchise for the American stage.

Apparently there is a huge Godzilla fan community locally because when we went to see this movie Thursday night the theater was a sell-out crowd (98% male) full of vocal Godzilla fans.  They gave a lot of loud "in the know" vocal reactions to the basically familiar Godzilla tropes that appeared in film including the use of a silly acronym like M.U.T.O. (massive unidentified terrestrial organism) to give us a name for the new monsters that battle the massive behemoth.
They also erupted into a huge round of applause at the end.

That definitely made for an...interesting movie-going experience.  My background with Godzilla is really just that I used to watch the movies on TV when I was a kid and I've gone to see GODZILLA 1995, GODZILLA (1998), and GODZILLA 2000 in the theaters.  Essentially, the basic set up for most of them (in my memory) is that (a) in 1954 Godzilla tore up Japan then disappeared (b) new monster(s) appear and start tearing things up (c) the humans somehow pull Godzilla into the mix to kill the other monster(s) (d) in the end, the grateful humans look on as Godzilla disappears into the deep waters of the Pacific Ocean.

So, essentially this is every other Godzilla movie ever made but with substantially better structure and effects (and star power) than ever before.  However, they still did that one thing that drives me crazy about every giant monster movie these days (JURRASIC PARK to PACIFIC RIM and every monster flick in between) is that they couch much of the monster f/x in the middle of a rainstorm.  Time for that cliche' to be done.  But make no mistake, I thought the monster f/x was incredibly well-done.  Godzilla has never looked better and the Mutos were outstanding as well.  The idea of a radioactively mutated bug species that consumes radiation and defensively set loose a pwerful EMP (electromagnetic pulse) worked quite well in updating the idea of monsters for 2014.

The opening sequence, set 15 years ago, with Bryan Cranston and his wife, Juliette Binoche, effectively established an emotional connection to the monster dramatics that kicked of the movie quite well.  In fact, the film might be criticized for it's over-emphasis on the human drama to the point of downplaying the Godzilla stuff a bit.  However, the biggest fault for this film in doing that was refocusing the film's narrative off of Cranston when it shifts to the modern day and onto Aaron Taylor Johnson who plays Cranston's now grown son.  I wonder if the filmmakers' choice of "Brody" as their surname was an insider's nod to Sheriff Brody of JAWS fame.

There was something emotionally lacking in Johnson's performance, which prevents the emotional resonance of Cranston's obsessively emotional overload.  A balance between the two of them would have been better for the film, which is interesting considering the approach to the monster they have chosen for this reboot.

In this version of Godzilla, he is a force of nature.  He exists merely to rise up when needed and in a predatory way chase, confront, and battle whatever new monster(s) that appears and upsets the natural balance of co-existence.  The King of the Monsters is apparently the only monster the earth can support.

It's all quite absurd and full of entirely preposterous coincidences to make sure that Johnson's character is always right there with the action.  In a film like this, that's just part of my expectations going in.  Ken Watanabe's scientist character, Dr. Serizawa, is completely wasted in what could have, and should have been, an integral role in dealing with these monsters.  Maybe it was the filmmakers' way of making sure we understood quite clearly that this is going to be an American franchise. I don't know.  It's not a dealbreaker, but it was disappointing.

Overall though, I would say (as a friend well-described it) this is an A-version of a B-movie.  It really is, for me, the "greatest" GODZILLA movie ever. That doesn't make it a great movie but it certainly makes it the greatest of the GODZILLA movies.

#godzilla
Posted by Keith Howell at 2:20 AM