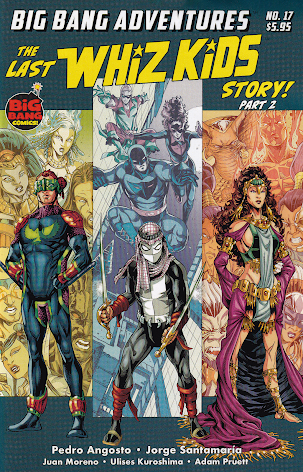 The final fate of Robo-Hood! A crushing betrayal and secret reveal—at the same time! A life-changing discovery and an unbearable loss!  Gender-switching! Wide-screen action!
This comic has it all, my friends.
My thoughts on this comic have been brewing for 3 or 4 months and I finally have time to write them down.  But let’s get this out there before I say anything else, THE LAST WHIZ KIDS STORY Part 2 picks up after the events of Part 1 but surpasses the quality level, and Part 1 was already exceptional.  At this point in time, Big Bang Comics is matching and exceeding the quality of super-hero comics by the Big 2 when Pedro Angosto is writing and artists like Jorge Santamaria are drawing. 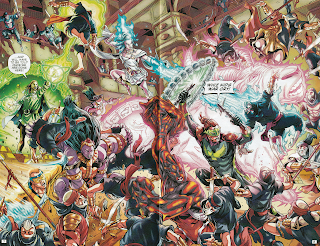 THE LAST WHIZ KIDS STORY, with it’s thick 27 pages of story, is a loveletter to Wolfman and Pérez’s NEW TEEN TITANS circa “The Judas Contract” and “The Terror of Trigon” in terms of style but carves it’s own identity as something fresh and relevant to today.  Wolfman and Pérez worked within a paradigm of expectations for mainstream super-hero comics but managed to push the boundaries of maturity in story-telling and content as had never before been done so consistently and so well. And this is where Angosto and Santamaria are channeling the spirit of that era for this 3-parter.


From a purely visual standpoint, Santamaria is on fire.  So many double-pagers intensely dense with detail and movement.  His design sense is off the charts.  I would be recommending this comic simply for more people to see his art even if the story did not hold up.


Thankfully, the story does hold up.  Angosto is brilliant at homaging without copying.  Which makes this story resonate, in my opinion, even if one has never read a Whiz Kids story before. There is such a deep sense of history within this story that I can’t even tell what is original to it and what is actually based on earlier extant Big Bang stories.  Angosto gives the readers everything we need to know within the comic itself. 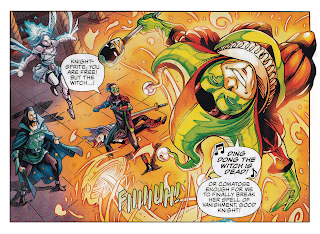 One thing I have enjoyed within all of Angosto’s stories for Big Bang is his inclusion of mythological and religious concepts and themes.  They tap into those archetypal connections within different cultures that resonate on a primal level with all of us.  It’s those recurring mystical and heroic archetypes that have evolved into the super-heroes of our popular culture today and especially resonate in comics—the art form in which they were birthed.


The villains and heroes of this story hearken back to ancient Christendom (Robo-Hood/Galahad), Islam (The Old Man of the Mountain/Sword of Allah), Judaism (Lilith), and Norse Mythology (Valkyrie) which is a compelling choice that I loved.  Angosto’s choices for “the heroes formerly known as the Whizzards” is a diverse and interesting upgrade for that team.  Might I suggest they could be called “The Cavalry”?  But I digress… 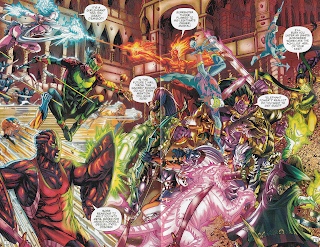 As with Part 1, this story focuses on Galahad and his journey from sidekick to Knight Watchman to a fully realized adult hero and leader.  But along the way he is gut-punched emotionally over and over again.  If fire forges the strongest sword, then Galahad will be unbreakable when Part 3 concludes this arc.   And I do not say this lightly.  Readers should be warned that the assaults and pain that Galahad endures in this story may unsettle sensitive readers as they are bold creative story-telling choices but effective.  He is also blessed with the opportunity to step up in a very personal way to try and shepherd the darkness into the light with great potential for the future.


With so much action, Angosto and Santamaria do take the time to slow things down to focus on the personal and emotional journeys that anchor the super-heroics.  The Galahad story, of course, but also the Merlin and Robo-Hood arc.  Both are essential to the elements that make this story work so well.


Readers familiar with DC comics, and especially familiar with the characters of Dick Grayson and Damian Wayne will hear their echoes within this comic.  But I promise you it will not be anything like what you expect and that’s the best part of the whole thing.  The story flows perfectly and it surprises throughout. 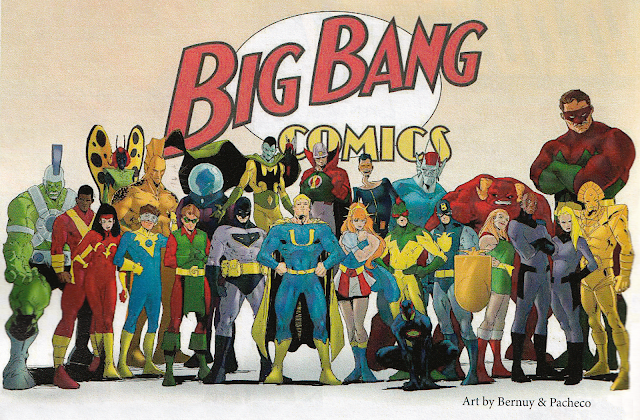 *I should probably note that this comic is a bit too mature in content and language to be considered an all-ages book.  This comic is probably appropriate for, oh, 12 years-old and up.  YMMV though. 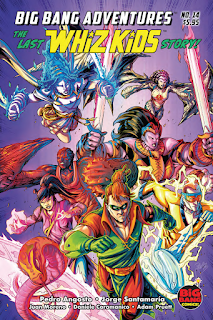 So, truth be told, I'd been waiting for this comic for quite awhile.  It feels like The Last Whiz Kids Story had been first teased a couple of years ago (but my memory may be playing tricks).  I'm a sucker for a few comic book tropes, such as Parallel Earth stories, Pastiche Character stories,Time Travel stories, Origin stories, and . . . Last stories.  When given the freedom to do a "Last" story, it really gives a writer the opportunity to go in directions that might otherwise be deemed unwise as they may leave characters in a place that is difficult to return to.  So, given that Big Bang is essentially a parallel earth comic book line built with pastiche characters, it just seemed like I'm already primed to enjoy it.  But give it to writer Pedro Angosto to once again impress me with how well he has matured into a writer of these super-hero tales to the point that I'm not feeling like he is outright emulating anyone else.  He dedicates this first of a 3-parter to Marv Wolfman and George Pérez for obvious reasons—the entire concept of the Whiz Kids was essentially the Big Bang version of DC's Teen Titans.  Pedro is operating as a writer within a paradigm that embraces the more fast-paced and adventure style of the Bronze Age of comics moreso than the modern slow-paced, dialogue slog of hyper-continuity that undergirds so much of what comes out of DC and Marvel these days.  And I say that without really intending it as a criticism of the Big Two because I recognize that storytelling styles inevitably change.  But it is an approach that doesn't often speak to me anymore within the comic books themselves.  What I love about Pedro's comics is that I always feel like I'm dropped right into another world and I enjoy every minute of the ride.  And that is what it felt like when I was buying Marv and George's NEW TEEN TITANS off the 7-11 rack back in the day.

Imagine if WATCHMEN had begun not with Rorshach investigating the mysterious death of The Comedian but rather it had been set within the DC universe proper and began with Robin investigating the mysterious death of The Question.  This is essentially the set-up for THE LAST WHIZ KIDS STORY.  We have a mystery that begins on a rooftop in Midway City with Kid Galahad standing over the body of Mr ?, a trenchcoat and fedora wearing vigilante who wears a full-face mask with a question mark in the middle instead of a face.  Galahad is in deep contemplative detective mode, well-taught by Knight Watchmen—yes, the Twilight Paladin himself, taking in the clues and bringing the reader up to speed.  There are some more visual nods to WATCHMEN in the detail of the backgrounds but I was actually grateful that Santamaría did not copy the grid design from WATCHMEN but instead stayed on point with his own storytelling abilities.

There is a great benefit to the format BIG BANG ADVENTURES uses, with 48 pages of story, because it lets the story breathe and move more naturally.  I would say that, having never seen a script, it gives the impression to this reader that Santamaría is trusted to pace the story visually to maximum effect. While at its core, this story revolves around a mystery, it is really about Galahad's personal journey to adulthood and finally stepping out from under the shadow of Knight Watchmen and fulfilling his destiny.  Over the course of this grand story, we get introduced to Galahad's Subterranean Base, which is his own version of Knight Watchman's Watchtower, flashbacks to his younger days as sidekick to Knight Watchmen, and a classic "getting the band back together" series of encounters as Galahad gathers his Whiz Kids around him to confront a global threat that is targeting kids.

The charm and the fun of the comic is the characterization and the interplay between the different characters, particularly Galahad and speedster Cyclone who tragically lost his legs in the same disastrous adventure that took the life of his mentor, The Blitz.  These are brothers in spirit who have known each other since childhood as sidekicks to 2 of the greatest heroes of The Round Table of America.  This feels like both the Last Whiz Kids Story but also like the origin tale for a new team that will exist after this 3-parter, and I can say I'm fully invested in where the story goes in Parts 2 and 3.  This is a lot of content, including a couple of text pages and pin-ups, that it is serious bang (pun intended) for your buck.  Also, that twist on the last two pages is fantastic.  If you are new to the Big Bang Universe, that should send you running to some back issue dealers to find out more.

This is good super-hero stuff, it's retro and it's also not.  A very difficult thing to accomplish and yet it feels seamless.  It's an interesting place that Big Bang Comics sits right now under the writing direction of Pedro Angosto.  They started out in the early 90s as a parody/pastiche of DC Comics but now that they've published as much as they have they have their own 30 years of so of legitimate history and continuity to play with now.  From humble beginnings, in the last few years, they've set themselves up as something of a vanguard for super-hero comics of a quality the meets and often exceeds the Big Two themselves.  That consistency of quality and publishing schedule is impressive and I make sure I never miss an issue.


If you are inclined to seek out back issues to acquaint yourself with the history of the Whiz Kids, you can order a couple of them direct from Big Bang here:  BIG BANG COMICS #6 and Whiz Kids Special.


You can order this and back issues of BIG BANG ADVENTURES exclusively at the Big Bang Comics store on IndyPlanet in digital or print.  I always recommend the print for the full experience.