*FINISHED* Superman as a pastiche of Doc Savage 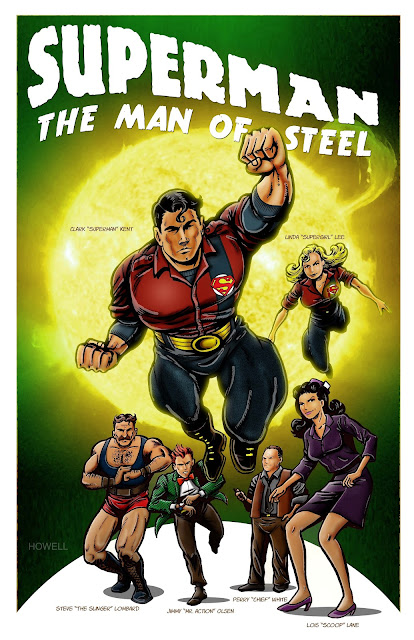 Finished piece depicting Superman and his supporting cast as a, sort of, pastiche of "Doc Savage" and his adventure team.

I'm envisioning them as a period concept, so it would probably still be in the 40s.  Hence the outfits on Lois, Jimmy, and especially Steve, who as an ex-sports star at that time would be making his living as a carnival strongman and bouncer.  I also thought it funny to put him in colors more reminiscent of the classic Superman costume. As well, the jodhpur pants on Superman and Supergirl date them from that 40s era as well.

The artwork was originally drawn in pencil, then inked with a brush and pen.  Then I scanned in the line art and layered in the color and effects in Photoshop.  The color scheme I chose for Superman here is still red and blue but desaturated and textured to give it more of an earth-tone, though I retained the full red and yellow for the "S" shield on the chest.

This was kinda fun.  I like my friend, J.R.'s suggestion of depicting his arch-enemy...who would be a red-headed female version of Lex Luthor with a gang of Bizarros.  I don't know if I'll be inspired enough to depict them.  But I sure like the concept.

Hope everyone enjoys this one.
Posted by Keith Howell at 1:35 AM