“I'm not saying I had a 'life flashing before my eyes' moment or anything...but still...I was scared, Hans. And it made me realize how important things are to me. Like home...and Dale.” -- Flash Gordon

Arrden Entertainment hits the stands this week with the further adventures of Flash Gordon, Dale Arden, and Dr. Hans Zarkov. The three humans are trapped on the planet Mongo and while Arden and Zarkov try to figure out how to return to Earth, Flash is working with Prince Barin, King Thun, and Prince Vultan to plan a series of tournaments as a way of peacefully uniting the people of Mongo in the post-war environment after toppling the despotic regime of Ming the Merciless.

This new series is set just a few weeks after Ming's first defeat (first of many, I will assume) at the hands of his frustrating human nemesis, Flash Gordon. This issue is an excellent set-up for this new story arc continuing the same successful approach of Arrden's earlier series. The developing relationship between Flash and the beautiful, and smart, Dale Arrden has solidified into something good. Zarkov is still throwing surprises Flash's way, which makes the development of the three humans into one of my favorite aspects of this comic.

I enjoyed the interaction between the three humans and the various alien races on Mongo. There is respect, but not necessarily trust, between many of these peoples and Deneen does a good job distinguishing the different cultures and attitudes. Adding to the difficulties here is that the “global translators” are malfunctioning. Yes, that old sci-fi standard for ease of communication is on the fritz which forces everyone to have to figure out different ways to be understood and cooperate.

Thrust into the middle of this “Tower of Babel” situation, an armored group of humans from Earth appear and begin an invasion of the planet Mongo and throw everyone's plans into turmoil. They have barely begun recovering from defeating the internal threat of Ming and now they have to face an unexpected external threat. Ending the issue with an unexpected and intriguing cliffhanger should bring anyone back for issue 2. 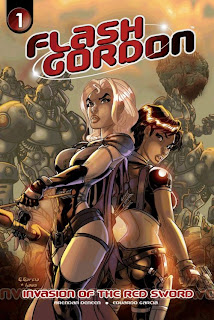 Overall, this is another excellent publication from Ardden. The art of Eduardo Garcia continues in the same style as established with the original series artist Paul Green. This makes for a seamless continuation of the story and characters from the first story arc. It's almost an American Anime (is there such a thing?) heightened reality look to the art. The colors are credited to “Estudio Haus” and what I really like about the coloring work in this comic (and in the previous series) is the otherworldly glow that the panels have when the story takes place on Mongo. I really get the sense of this being an alien world because it feels...different. The sun looms larger and its rays infuse every daylit scene with its presence. I like the way Garcia structures the panel flows from page to page. He breaks things up in an interesting way and when he starts angling the panels during scenes of movement, there's almost a lightning bolt sense to it, which makes sense for a FLASH GORDON comic book. I even liked the fact that “Consulting Editor” Jim Kreuger injects himself in the panels where appropriate to refer the reader to earlier trades. It's “old school” and I like seeing that.

I think Ardden demonstrates, once again, they truly understand how to take classic characters like Flash Gordon and modernize them in a relevant and fun way. And that's the bottom line as to why you should get this comic: