THOUGHTS ON DC REBOOT (Part 2B): Is this the perfect time for Capt. Marvel to go "Black"?

I'm actually not being facetious when I say that the DC Reboot is the perfect opportunity for DC Comics to really be bold and progressive with the Capt. Marvel/Shazam character at the same time they "re-imagine" Superman to be new and relevant for the new Millennium.  With the line-wide relaunch of DC Comics, with an expressed policy of diversity in the line to better reflect the modern world and our culture, I believe they should brush the dust off of Roy Thomas's idea from the early '80s of Billy Batson and Captain Marvel as African-Americans.

To my knowledge, this image of Cap & Billy by then-current SHAZAM! artist, Don Newton and inked by later POWER OF SHAZAM! artist, Jerry Ordway, is the only visual image we have of Roy's idea.

The make-up of the DC Universe at the time was one in which the main heroes of the line existed on "Earth 1" and there were different groupings of heroes that occupied parallel "Earths" that existed in other dimensions vibrating at a different frequency than the "Earth 1" dimension.  The decision had been made back in the early '70s when DC acquired the Fawcett Publications library of characters, which included Capt. Marvel and the entire Marvel Family, to keep the characters consistent with the original cartoon-ish looking world they occupied in the 40s and 50s.  By necessity, since the "Earth 1" DC Comics were supposed to reflect the "real" world, editorial relegated Captain Marvel/SHAZAM! to the parallel world referred to as "Earth S" (or Earth-Shazam). 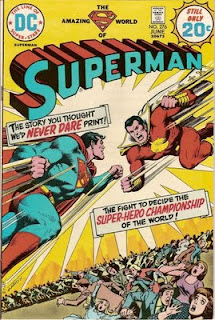 DC did allow fans one glimpse of what could be construed as the "Earth 1" version of "Capt. Marvel" in a one-off story in SUPERMAN #276.
Longtime comic readers were already familiar with the character.  Young Billy Batson, when he speaks the name of the magical wizard "Shazam" he turns into the World's Mightiest Mortal, Capt. Marvel.  Capt. Marvel is empowered with the Wisdom of Solomon, the Strength of Hercules, the Stamina of Atlas, the Power of Zeus, the Courage of Achilles, and the Speed of Mercury. 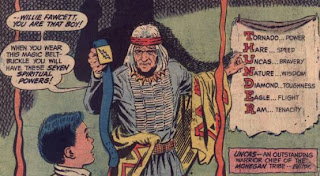 In this story, the "Earth 1" version, young Willie Fawcett (a tribute to Capt. Marvel's original publisher, Fawcett Publications) is granted by a wise old Native-American shaman a magic belt that turns him into "Capt. Thunder" (a nod to the original name for Capt. Marvel that was changed before newsstand publication of WHIZ COMICS).  Capt. Thunder is empowered with the "Seven Spiritual Powers": the Power of the Tornado, the Speed of the Hare, the Bravery of the Uncas (warrior chief of Mohegan tribe), the Wisdom of Nature, the Toughness of the Diamond, the Flight of the Eagle, and the Tenacity of the Ram.

More common in those days, this character was intended to only appear in this single issue as a tribute to Capt. Marvel and an inside joke for fans. 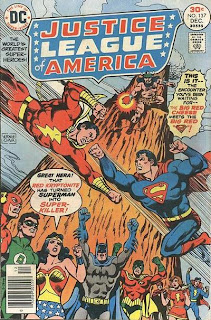 Then a few years later, DC decided to expand upon their usual practice of once-a-year team-ups between the Justice League of "Earth 1" and the Justice Socity of "Earth 2" by  drawing in the "Squadron of Justice" from "Earth S" (made up of the Marvel Family characters and other Fawcett characters like Bulletman and Crimebuster) for a multi-part epic team-up.  For the first time ever, Superman and Capt. Marvel met face-to-face...and this time it was for real. 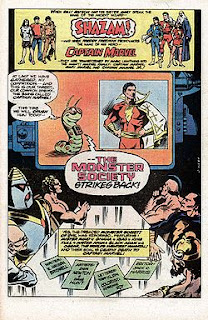 Sales on the "cartoon" version of the SHAZAM! comic book had been increasingly lackluster and buttressed by the slam-dunk appearance of "The Big Red Cheese" in that JUSTICE LEAGUE story plus the fairly successful live-action Saturday morning SHAZAM! series, DC retooled the SHAZAM! comic book with an all-new "realistic" look from artist, Don Newton.  The artwork was gorgeous, but still the concept and the stories didn't seem to connect with readers and reflect higher sales.  The SHAZAM! comic book was cancelled but the SHAZAM! feature itself started bopping around to oversized anthology titles like WORLD'S FINEST and ADVENTURE COMICS until it disappeared completely.

During this interim period before he got folded into the primary world with Superman as a result of CRISIS OF INFINITE EARTHS, the character was sort of in creative limbo other than occasional pop-up appearances whenever the dimensional gulf could be traversed by a plot complication.  This was the period in which Roy Thomas (according to the Comics Buyers Guide #538 in 1984) proposed, along with SHAZAM! artist, Don Newton, a bold re-invention of the character for "Earth 1".  He proposed making both Cap and Billy black.  He even went further in his proposal that DC could call this version "Capt. Thunder" as a way to distinguish him from the "Earth S" version, even though the multiple Earths concept had often allowed DC to maintain 2 separate versions of characters with the same names and powers (Green Lantern, Superman, Flash, etc.).

For whatever reason, DC seemed happy to essentially have their entire "black" line-up out of hundreds of super-characters be limited to "Black Lightning, Vixen, Cyborg, and occasionally Green Lantern (when John Stewart would fill-in for Hal Jordan)."

So, now we have the perfect opportunity for DC to show some real balls in this whole "reboot" nonsense.  I think it's pretty obvious that the impetus behind this relaunch of the line and rejiggering of characters springs first from the need to establish a solid new and relevant version of Superman.  However, that foundation has led to a full-scale opportunity for DC, from an editorial standpoint, to clear out the cobwebs and sweep the floor of anything in continuity that does not serve their proactive goal to rise to the top of the comic book sales market.  The dizzy and slack-jawed response from Marvel indicates that all those "non-disclosure agreements" that everyone involved had to sign must have worked and DC has made themselves essentially the ONLY comic book publisher anyone is talking about this summer.  And part of what DC has made clear to the press and fans is that they want the "New" DC Universe to be a much more diverse continuity in terms of race, religion, and sexuality than ever before and they want it to be so from the get-go.  And in response I say, that from a creative standpoint, I cannot imagine a better time for DC to do something much bolder than taking Z-stringer characters like Blue Beetle, Question, Aqua-Lad, Batwoman or new characters like Batwing and diversifying them.  Be bold enough to diversify the one character that is a conceptual equivalent to Superman and at the height of the golden age was more popular than even Superman himself!  Without insulting ghetto-ization or blax-ploitation, brush the dust off Roy's 30 year-old idea and ignore all that has gone before (and especially ignore the terrible "Capt. Thunder" version of the SHAZAM! concept that appeared in FLASHPOINT).  Prop up Capt. Marvel/Capt. Thunder as an African-American and make no apologies.  Position him as effectively the equal (and possibly superior) of Superman himself and make him a vanguard of equality in this relaunch.

If DC is not going to give Superman an ethnic look or make Batman a man of color or even at least give Wonder Woman a hint of Greek ethnicity in her look, then Capt. Marvel is the perfect character to show that DC is not a pantheon of heroes in which the white man still reigns at the top of heirarchy.