This week, ACTION COMICS #900 revealed Superman's intention to renounce his American citizenship to become a "Citizen of the World."  Needless to say, this was a bit controversial.  However, the attention it has generated for DC Comics and their Superman character has been extraordinary and, as is the usual pattern in such things, apparently inspired other publishers to follow suit with similar storylines.  I found these 5 reports on the newswires this morning.
James Bond renounces British citizenship
British super-spy, James Bond renounces his citizenship in an upcoming new novel. The publisher announced today that they are cancelling all orders on the previously scheduled novel, CARTE BLANCHE, by Jeffrey Deaver and announcing a street date for an entirely different novel.

HER MAJESTY IS NOT ENOUGH, the new James Bond novel by acclaimed Hollywood screenwriter and director, Roland Emmerich will reportedly center around a controversial development in the life of the quintessentially British hero. After decades of successful missions in which the former Royal Navy Commander faced down global threats, including terrorist organizations such as S.M.E.R.S.H. and S.P.E.C.T.R.E., he comes to realize that he is tired of being perceived as a tool of the British government.

In a dramatic encounter with the British Prime Minister, Bond announces his intention to resign his commission, renounce his citizenship, and become an at-large agent of the United Nations.
God Save the Secretary-General! 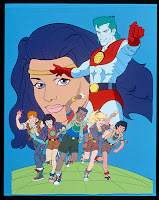 It has been over 15 years since the last new CAPTAIN PLANET & THE PLANETEERS cartoon aired. In that time, climate change has caused ever escalating disasters wrought upon the earth and the rise in global temperatures melts the ice crystals that entrapped Gaia, the earth goddess. She calls forth, once again, the great mullet of environmentalism called Capt. Planet. But his reaction to the modern world is one of disillusionment and despair.
This is the bold direction of the new CAPT. PLANET: WHEN A MULLET CRIES animated film recently rushed into production by Hanna Barbera and produced by Ted Turner and Michael Bay.

When Capt. Planet calls the Planeteers into action and none of them show up, he sets off to search for them. His worldview is shattered when he discovers that Kwame was set on fire when he returned to his African tribe and revealed that he wielded a magical ring that controlled plant life. Wheeler was delivering mail in the World Trade Center when terrorists flew planes into the towers on September 11, 2001. He did not survive the attack. Linka died in a Siberian gulag as an enemy of the state because she publicly expressed her disagreement with Putin's policies. Gi was consumed by a Great White Shark while scuba-diving off the coast of Australia. The most heart-breaking for Capt. Planet, was learning that Ma-Ti was killed in her sleep by her own pet monkey, Suchi, who it turned out was a sleeper agent for the Eco-Villains.
Sliding desperately into extreme and emasculated depression, Capt. Planet publicly renounces his allegiance to Gaia and leaves Earth to choose a planet without ecological diversity or humanity to protect.


Tarzan abdicates Lordship of the Apes 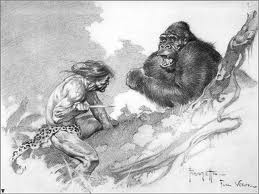 Tarzan, who ascended to the leadership of the Mangani tribe of great apes nearly 100 years ago has announced his intention to abdicate the position.

In the first officially sanctioned novel since THE DARK HEART OF TIME by Philip Jose Farmer in 1999, Tarzan returns in TARZAN, MAN OF THE PEOPLE by acclaimed Hollywood screenwriter and director Joe Ezterhaus.

The story involves Tarzan officially abdicating his position as Lord of the Apes and putting his Kenyan plantation estate up for sale to effect his return to assume his position as Viscount of the Greystoke estate in England. With Jane by his side, Tarzan mounts a campaign for position of Prime Minister under the Naturalist Party committed to principles of globalism and environmental awareness.
The Burroughs estate explains in a press release that this is the natural progression of the character and recommends people read the story before criticizing. They assert that Tarzan's creator, Edgar Rice Burroughs, always intended Tarzan to abdicate his Ape-ship and become a global political powerhouse. 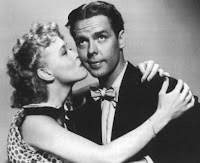 An icon of the institution of American marriage is coming to an end this year. Blondie and Dagwod Bumstead will dissolve their marriage of 78 years with a dramatic change. Blondie, tired of decades of sub-middle-class life with the bumbling and selfish Dagwood dumps him and returns home to her upper-crust parents' mansion.


Retaking her maiden name, Blondie Boopadoop parlays her family name and her experience as a middle-class wife and mother into a global reality TV-series. Dagwood will be written out of the strip after his marriage is shattered, his children turn on him, and even his dog Daisy rejects him in a controversial panel where she intentionally pees on his leg. 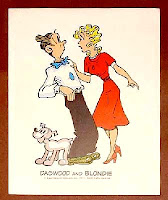 When asked about this change, longtime BLONDIE writer, Dean Young, explained that it happened because a Hollywood screenwriter approached him with a proposal for a new film franchise possibility. The approach in the film is one that recognizes Blondie's global appeal as a woman of beauty, wealth, and intelligence who steps out from under the oppressive thumb of her shiftless American husband to become an avatar for women's rights everywhere.
"How could I turn down such an important and monumental opportunity?", Young declared.

Pluto emancipates himself from Mickey Mouse

Disney, once again in the forefront of important global issues, takes charge of the international movement concerning animal rights and elevation of status for former pets to personhood. On the heels of the "Global Declaration of Emancipation of Pets" presented to the United Nations last week, Disney announced production beginning immediately on a new feature film to capitalize on this new development. 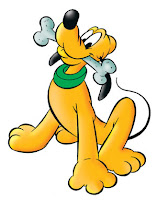 PLUTO: FREEDOM AIN'T EASY reveals that despotic and abusive control which Mickey Mouse has maintained for so many years to keep Pluto from asserting his personhood. In a world populated by anthropomorphized animals, Pluto has been forced to live a lie and act as if he is a brain-damaged pet in a world that could not truly even have a concept of "pet." Reflective of our slavery past, Disney states "We recognize that our inaction on this important issue for so many years has been a mistake and it is one we hereby rectify with this landmark film."
No longer will Pluto be lapping water and trotting around faithfully behind his brutal mouse master. Here on out, Pluto can stand up tall and join Goofy as an intelligent and talented leader in the global community of cartoon dog people. "As voiced by the brilliant Freddie Prinze, Jr., we expect this incarnation of Pluto to become an icon of freedom and animal's rights throughout the world," Disney said in a press release.