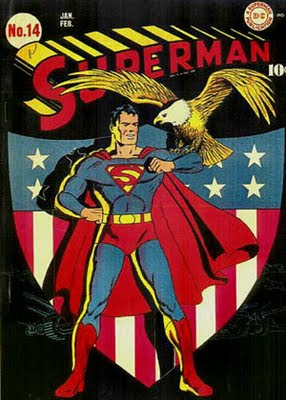 I've been wondering for awhile what would be my breaking point.

Superman renouncing his American citizenship is it.

I didn't know until now.

There was a time when "anniversary" comics were considered a celebration point.  I remember looking forward to them with great anticipation.  They were opportunities to sort of wallow in the love of the characters and the stories and, hopefully, get a classic rough-and-tumble between hero and villain and maybe even some nice pin-up art from great artists.  DC management, on the other hand, thinks celebrating the milestone publication of ACTION COMICS #900 is the time and place to have the character upon which DC Comics was built revoke his citizenship in the United States of America.  Henceforth, he will fight a "Neverending Battle for Truth, Justice, and the International Way!" 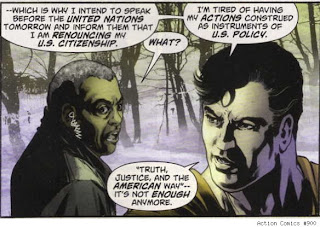 Doesn't quite have that archetypal ring does it?

Short-sighted idiocy seems to be the philosophical stance at DC Comics management these days and this one is a doozy.  The implications of a citizen like Superman publicly renouncing his U.S. citizenship at the United Nations is nothing short of treason unless he also publicly unmasks his Clark Kent persona and retires it.  You can't have a non-citizen vigilante contravening laws in the United States with an unspecified allegiance and also have that character continuing to live under false citizenship under a secondary secret identity and receiving the benefits and Constitutional protections due him as a citizen.

A character as powerful as Superman who has functioned not only as a citizen but, over the years, as an agent of the Executive Branch of the U.S. government cannot just renounce his citizenship and expect to continue to function within the boundaries of the U.S. without it being construed as a potential enemy invasion.

Effectively, Superman has placed himself in a position of adversary to the U.S. regardless of what the character says nor what DC claims.

I am afraid this finally puts the character of Superman in FUBAR territory.

The thing is, Superman has always been seen and recognized by readers as a "Citizen of the World."  But it was also understood that you can't really address it within the stories and continuity because of the ramifications involved in terms of Clark Kent's status as an American citizen.  However, as soon as a short-sighted writer makes this a major plot point then the sinkhole takes hold and it is nearly impossible to pull out of it.

The truth of the matter is that we all have to make certain concessions to accept the fantasy of Superman.  We can't dwell too long on the fact that sexual intercourse between the character and his love, Lois Lane, would inevitably be a one-night stand because she would not survive the night.  We don't dwell on the fact that he obviously can't have normal bowel movements like us humans or the sewer pipes would explode trying to break apart his invulnerable stools.  We can't dwell for very long on how utterly stupid everyone around Clark Kent would have to be to not see through the glasses disguise.  We don't dwell on the missing birth or adoption certificates of young Clark.  And we surely do not have Superman publicly renounce or even claim U.S. citizenship.

I was trying to think back through my last 40 years of reading Superman comics to the pathway that led to this development and what I came up with was this. 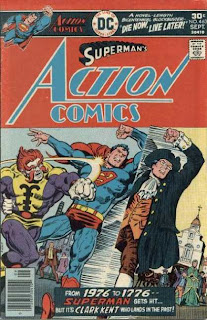 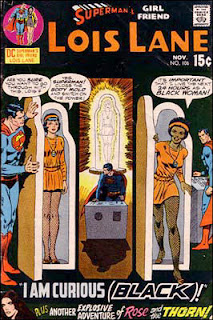 In the '70s, there were occasional stories I remember that began dealing with social injustice and international concerns.  For example, there was the unintentionally racist story where Superman turned Lois Lane into an African-American so that she could infiltrate Metropolis' "Little Africa" section and enlighten the black people that "whitey" could be trusted.  There was a story addressing overpopulation.  There were stories where Superman lost his powers whenever he took off his costume, so he decided to live for a week as just Superman and a week as just Clark Kent and eventually realized they can't really be separated.  There was a story where he got sent back in time to the Revolutionary War as a celebration of the Bicentennial.  I remember seeing stories where the President would send Superman out on a mission, and Superman did so, I guess as a good "citizen" would.


I don't remember a story dealing with his immigration status. 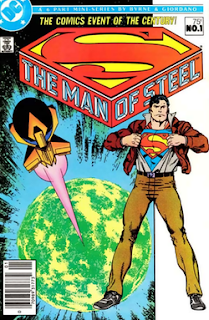 Roll forward to the late '80s.  Superman comics got rebooted with the MAN OF STEEL mini-series which attempted to "update" Superman for the modern era.  In the new continuity, Superman was apparently rocketed to Earth while he was still a fetus, and his rocket ship was sort of an artificial uterus so that when he arrived here he was "born" in Kansas.  So, somebody at DC at that time must've realized that Superman  needed to be "born" here to satisfy the legal requirement for him to be an American citizen -- even though it was not explicitly stated as such.

Otherwise, that change was pointless. 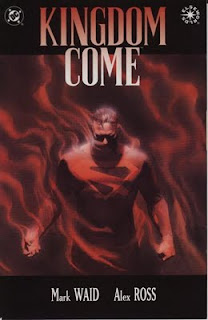 The character of Superman has been on a downward trajectory ever since (ALL-STAR SUPERMAN notwithstanding).  Within a couple of years of the modernizing, he had outright executed 3 Kryptonian villains.  Then he went crazy because of the guilt.  Then he sort of meandered around the DC universe pointlessly for a number of years.  With KINGDOM COME, a more classic version of the character got thrown back into the forefront, but darkened by an apocalyptic vision of the future and massive indecisiveness.  This was followed through on in JUSTICE where, once again, Superman is indecisive and ineffectual.

SUPERMAN RETURNS hit the movie screens and we saw a messianic version of Superman who fathered a bastard child, stalks Lois Lane, and is once again racked with indecisiveness.   This was also the first time that "the American way" was noticeably removed from "Truth" and "Justice" (a change I attributed to Hollywood).

This interpretation rooted itself into the comics for the most part, except for a short run by Geoff Johns and Gary Frank that glimpsed the Superman of old.  But then readers had to gag through over a year's worth of stories about everyone except Superman filling the various Superman titles culminating in the well-publicized "Grounded" storyline.  Yes, "Grounded", where self-righteous, Thoreau-spouting Superman took off for a year to "walk" across the country and figure things out.  "Grounded" was easily the worst thing I'd ever read involving Superman up until the point Chris Roberson took over.  He somehow took this awful idea and turned it into a celebration of Superman past, present, and future.

I had hope for the future.

Until now.  Roberson was not asked to continue writing SUPERMAN after the "Grounded" storyline.  And now, ACTION #900 comes along and answers the question "What was 'Grounded' ultimately about?"

It was about making the implicit explicit.  And by doing so, they have created a mess of confusion for the future because, once it's out there in print, it's impossible to truly erase it.  Readers can use selective memory and application, but it doesn't change the fact that the more you bring realism into your fantasies the more the implications and ramifications of those decisions are forced to mind.

In this case, Superman becomes enemy of the state.

And that's not any sort of Superman I care about.
Posted by Keith Howell at 6:27 PM