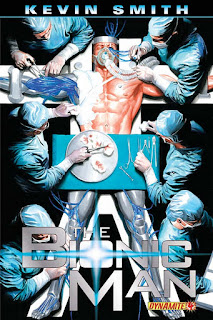 “Colonel Steve Austin, a man barely alive.  Gentlemen, we can rebuild him. We have the technology.  We're going to recreate the world's first, fully functional Bionic Man.  Stever Austin will be that man.  We'll make him better than he was before.  Better, stronger, faster.” -- Oscar Goldman 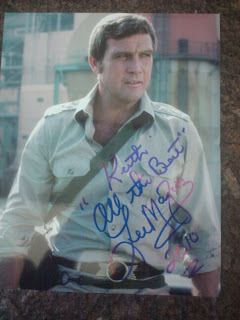 After three ridiculously awful snails-pace issues that made me want to set my hair on fire, we finally get to the surgery.  Most everyone knows at least the basics of the story, astronaut (well, test-pilot in this comic) Steve Austin crashes an experimental plane and loses an eye, one arm, and 2 legs.  A top-secret government organization invests $6 million (a day, in this comic) to have his limbs and eye fitted with bionic replacements and a commitment by him to be their own, secret super-spy.

If you were a kid with a television in the 1970s, you watched it.  If you're younger than 30, you probably only know it by reputation because the character and the basics of the premise (along with slo-mo running and neh-neh-neh-neh sound f/x) are a pop-culture touchstone now.

And now, at 45, I sit here trying to read a horrible attempt at updating the character for the modern day.  However, this issue is at least a bit more readable than the previous 3 issues, mainly because it's essentially just the surgery, recovery, and training to control his bionics.  It ends with Steve agreeing to join the OSS and take down villains like Bin Laden and Qadafi.  So, I guess I'd have to say that if you haven't picked up the previous 3 issues, this is the place to jump on because they were all such inconsequential nonsense and gloriously bad that I can't in good conscience recommend them.  But, even saying that, I don't mean to give the impression that this issue was good.  Far from it.  It's also pretty stupid.  I can see where some of the elements in play were hashed out in terms of plot, it's just that the way the storytelling progresses, plus the stilted dialogue, is about as bad as some of those 50s' B-monster movies...but with pointless cursing added.

Beyond the fact that it just kind of stinks overall, I'm amused by the things that distracted me (always a bad sign in terms of quality of writing or art).  For example, I am just assuming that part of the license Dynamite has here requires them to avoid the likenesses of the actors from the TV series.  And that's fine.  However, was it really necessary for them to “cast” Wilford Brimley in the role of Dr. Rudy Wells?  And to add to the confusion in terms of comic book casting, the covers (especially issue #2) realllllly make Steve look a whole damn lot like Lee Majors, whereas in the comic he's a generic steroided out mushed-nose tough guy.  More confusing is the appearance inside the comic of the actor, Richard Anderson (Oscar Goldman in the TV series) in a couple of scenes as one of the surgeons.  This was especially confusing at one point where, in another example of bad storytelling, it appeared that he might actually be “Oscar Goldman." I had to flip back a couple of pages to figure out what I was looking at.

It's just inconsistent and odd decisions to make when doing the comic.

During the surgery, there's a lot of scientific jargonage tossed around by Oscar in an attempt to lend some degree of believability to the plot.  So, if you want to read 4 pages of exposition, this is the book for you.  Thankfully there's no follow up in this issue to the plot that kicked off the first issue (the one with the bionic bad guy slicing people's heads in half with a samurai sword....yeh...that's what I said).  It's basically a stand-alone comic that's a glorified training montage.

They completely skipped over the emotional struggle of Steve coming to terms with what happened to him.  This was a strong part of the original TV-pilot movie and the novel the show was based on, CYBORG by Martin Caidin.  And that's the worst thing about this series so far.  There's no passion or emotional connection to the characters.

At least Max, the bionic dog, makes a short appearance at the beginning to somehow convince this man who woke up to find himself with 1 eye, 1 arm, and no legs to submit to experimental surgery that will wind up also removing his good arm and his 1 good eye as well.  Yes, they did that to him.  But don't worry.  He frets about it for 3 or 4 panels and then....it's all good.
Posted by Keith Howell at 8:48 AM