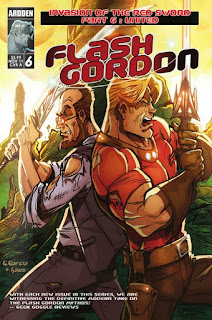 “So....Hans...when we met at that boring dinner after the Olympics, did you ever think we'd end up like this?!” -- Flash Gordon

A rousing conclusion to a great story. I've raved about Ardden's FLASH GORDON series every chance I get and the conclusion to this mini-series is perfect. I don't want to give anything away but all the pieces come together in a very satisfying wrap-up (and like all good serials...a tease about an obvious future development). If I understand correctly, the next FLASH GORDON series from Ardden is not going to be a monthly pamphlet-style but a complete story in one larger graphic novel format.

I understand the market needs that make that the more viable way to get the story out there, but I will miss the serialized aspect of the monthly series. One of the hallmarks of this and the previous mini-series have been the masterful pacing and cliffhanger-style storytelling.

I can't really dig into it much deeper other than to say that I love the way writer Brendan Deneen writes the characters. They are recognizable as Flash and his supporting cast but they feel modern and relevant. The story is fun but also nuanced with moments given to characterization. Artist Eduardo Garcia stepped in with this story and has grown with each issue. He gets better and better. A fine artist with a good sense of how to tell the story in pictures.

Recommended for all ages. 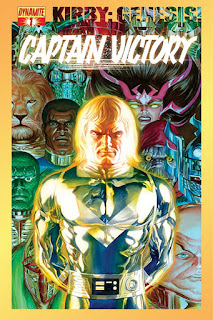 “When you get to the gates of Hell, stand there and wait for my grandfather. I'll send him along soon enough.” – Capt. Victory

I really was disappointed in this one. I love Kirby's work on CAPT. VICTORY AND THE GALACTIC RANGERS, but I sure didn't care for this comic.

The story, as such as it is, begins with Capt. Victory (think Orion of the New Gods) being resurrected in a new cloned body moments after being killed in a battle (think Battlestar Galactica Cylons). There's some fighting, a flashback sequence to give us a taste of the hard defining moments in Victory's life that have led to his thirst for battle, and then they are called back by Galactic Command. A little teaser bit about his evil and powerful grandfather, Blackmass (think Darkseid), and the issue is done and the stage is set for the series.

Why didn't it work for me?  The unfortunate answer is a combination of the writing and the art. The writing just didn't grab me and interest me in the story or the characters and the art was distracting on a number of levels. Victory himself comes off pretty poorly to me barking orders here and there. The other Rangers are pretty much ciphers with no real effort made to introduce them to me. Had I not some buried memories of who these characters were from my youth, then I wouldn't have had a clue...nor would I have cared.

I don't know if Alex Ross laid out the visual storytelling thumbnails, but I doubt that he did. As opposed to the GENESIS series, this suffers by really poorly structured pages, angles, and compositions. Superficially, the main figures usually bear the details well when they are super-hero-like with the heightened musculature. In those moments, they have a Brent Anderson quality to them that is fine. Unfortunately, the story calls for a lot of technological backgrounds and lots of figures wearing bulky sci-fi body armor and that's when the art really falls apart. The fault on this is something I lay on Dynamite's decision to obviously shoot from artist Wagner Reis's pencils rather than bring in someone to actually ink them. Not everyone's pencil art holds up to direct reproduction and nearly all the flaws in the art could have been fixed with a strong inker to clean up the scratchy lines and fix the inconsistencies in geometric angles and foreshortening.

The body armor moments are embarrassing. They look in no way like something a person could actually wear and the geometry of the armor is all over the place which makes the panel compositions almost impossible to decipher at times.

I know there's a school of thought these days that persists in perpetuating a myth that “inks” in the past were simply a way of making the line art able to be photographed for reproduction. That may have been how it was in the beginning, but beginning in the 60s, there was a generation of artists committed to inks only that did much, much more than trace the pencils. These artists came in and tightened the art up. They fixed those angles, they cleaned up the lines, they added shadows and texturing. In other words, they collaborated with the pencil artist to create something together that was greater than what either of the artists could produce alone. This was especially true in some instances where an inker could pick up the slack when a penciller came up short in anatomical or geometric accuracy. This comic is one that was desperately crying out for an inker to step in. The main figures are so different in quality from the rest of them that they almost, at times, look like they are pasted down on top of the art – like they were done separately and then added in. It is very odd and made the entire comic difficult to follow.

I wanted to like this one. Unfortunately, it's just mediocre at best and that's just not good for a Kirby concept like this one. This should be rocking my world.