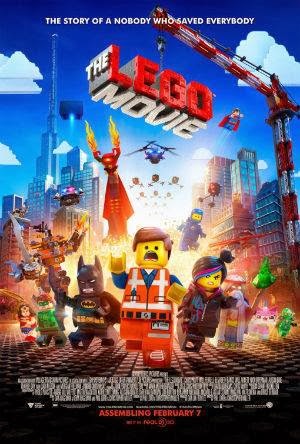 This is my favorite movie of the year so far. Perfectly conceived and executed. The computer generated animation is photorealistic to the point that I immediately had to go online to find out if it was actually stop-motion. But no, this is mostly CGI with some surprise live-action and stop-motion integrated into the story. The voice cast is so incredibly perfect that I think the casting director should win a special Oscar just for herself. In particular, Will Arnett slam dunks the funniest Batman performance ever. His “Dangit” is already a part of my own repertoire now. Jonah Hill’s Superman-sycophantic Green Lantern had me rolling everytime he opened his painted Lego mouth. Chris Pratt’s vocal performance as “Emmett” the generic Lego construction worker who might (or might not) be a little more special than he realizes. Oh and a couple of unknowns named Will Ferrell and Morgan Freeman have parts as well.

Here’s the bottom line about this movie, it is absolutely appropriate for children of any age and it is brilliantly funny and clever enough that it is fully enjoyable for parents as well. My wife and I were the only 2 adults in the theater who were not there with kids but I’m going to encourage everyone, whether they have kids or not, to go see this movie. It is that good. Fun, funny, smart, and solidly entertaining from start to finish. If you are still on the fence, let me tell you that The Lego Movie is….essentially….THE MATRIX….with Legos. You watch it and tell me I’m wrong!

I will admit to some sarcastic mockery in me when I first saw that there was a Lego movie coming out. It’s such an obviously cynical cash grab and games/toys translated to the big screen do not have a spectacular history. Sure, THE TRANSFORMERS have been a financial goldmine for the studio but in terms of quality of storytelling, nobody is going to claim they’re anything more than just an excuse to watch robots causing mass destruction. Maybe this movie began its life in a crass and cynical way but the screenwriters and the directors transcended that to create a story with archetypal underpinnings and emotional depth deceptively hidden behind these brightly colored building blocks. The Lego Movie is the lovechild of nostalgia and childlike imagination.