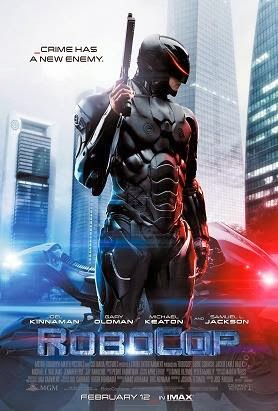 To answer your first question: This remake is different enough from the original to justify it's existence.

To answer your second question: It depends on what your expectations are going in.

I expected the movie to be a total waste of my time and instead I found it inoffensive and good enough to sit through without getting bored. It's not particularly clever and is completely devoid of any sense of humor about itself (so it is already in very different territory t...han the original and its sharp satire just because of that). This film is not satire and is more of an exploration of what it means to be human than the original. It also explores the current state of politico-media demagoguery in ways that make it an effective enough commentary on today's cultural climate. Samuel L. Jackson's bombastic asshole TV pundit "Pat Novak" of "The Novak Effect" with its conflation of Bob Novak, Pat Buchanan, and Bill O'Reilly into one guy is about as clever as it gets -- and that's about as clever as a 90's era Image comic. Gary Oldman is very engaging as the doctor who saves Officer Alex Murphy by putting him in the prosthetic robot suit. Michael Keaton is his usual hyperactive lisping self (with terrible haircut). Robocop himself is played by Joel Kinnaman (from TV's THE KILLING). He isn't bad but I don't find the actor to be very charismatic. Original Robocop actor Peter Weller has an unbilled cameo during the final act.

For those who don't know, the plot is very simply about a near-future world where an American corporation wants to bring it's robot police drones onto the United States soil so they take a police officer blown to bits and connect him cybernetically to a robot body. This way they can convince the public and the politicians that there is still a human element to the drone program. Robocop is the "beta", so to speak.

Along the way there is a lot of super-hero style action but without any of the gore and violence that was a trademark of the original (well other than seeing his face, esophagus, and lungs working while the suit is removed a couple of times). And that is really key to the potential success of this movie. It's not a sci-fi satire but a super-hero movie now. So it fits the current moviegoing public's tastes pretty well I expect. Not one thing in the storytelling was surprising or unexpected; in fact, the entire movie is totally predictable but always slides just slightly under the bar of smart. There's even a line at one point by the evil corporation CEO where he says "You know what's better than a hero?" And I leaned over to my wife and muttered "A martyr" one second before he said "A dead hero."

And I just laughed.

Bottom line: It's a standard popcorn flick. Don't expect too much and don't overthink it. You'll have a good time. If you can't check your brain at the door or not compare it to the original you should probably avoid it. But I thought it was decent enough. Not awful. Not great.