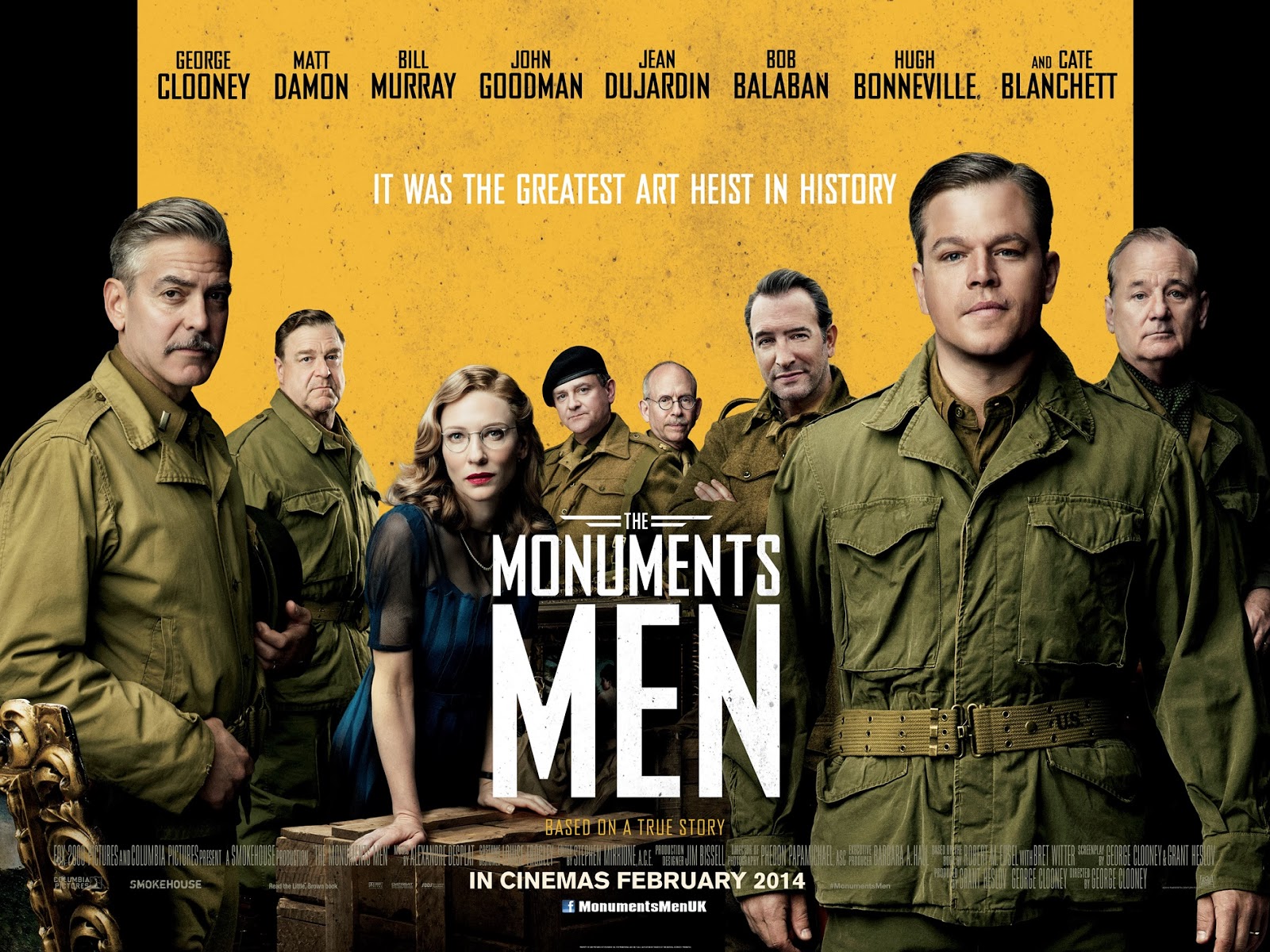 Well, THE GREAT ESCAPE this ain't.

It ain't OCEAN'S ELEVEN either.

So, I hope you aren't planning to see it because you liked either of those classics.  The movie is technically well done. The details are good. The actors all are well-coiffed and moussed all spiffy in their uniforms.  The scenes are framed well. The cast is spectacular.

It's actually all of those things at various times with the rah-rah pro-America propaganda piece front and center most of the time.  Apparently, Uncle Sam is the only trustworthy country in the whole of the world to take the art of other countries and actually return the pieces to their rightful owners.
It's not that the movie is bad.  It's not bad.  It's just not any better than middling good.  None of the actors really gets a chance to really create a character who is memorable; well, except maybe for Bob Balaban and his character.  Part of that is how the film is cut together in such a way that I could tell I was supposed to care about these guys but didn't spend enough time getting to know them so that when "war" stuff starts happening and the art-saving plot kicks into high gear I'm just not invested in them as people.  It's a bit of a crime that Bill Murray is restrained so much here rather than letting him and Balaban just start riffing off each other improvisationally and create a memorable duo out of their pairing.

Everyone is likeable and all, but...aw hell, this thing should've been so much better. George Clooney's directing was lackluster with no panache and his performance was stilted and flat.  I compare this to the performance Alfonso Cuarón was able to get out of him in GRAVITY and I'm tempted to say maybe Clooney shouldn't be directing himself again anytime soon.

I appreciated the efforts to save the paintings and statues that the Nazis were hoarding and I appreciate that Clooney and his crew all obviously worked really hard to tell this story.  It's an interesting story.  I wish the manner in which the story was told had been as interesting.

I think I understand why the studio released it in February rather than, say, during the Oscars run near the end of the year.  The biggest problem with a mediocre film like this is that it will just politely disappear out of the public's memories fairly quickly.