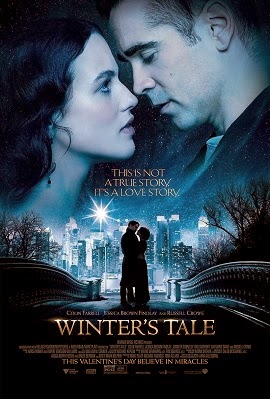 I don't have a freakin' clue what I just saw.

By the end I found myself trying to figure out how such an esteemed cast (Colin Farrell, Russell Crowe, Will Smith, William Hurt, Jennifer Connelly, Eva Marie Saint, and more) could all have been conned into being a part of this mess of confusion masquerading as profundity. Then it all made sense when the credits rolled and I saw that it was written and directed by Academy Award-winning screenwriter Akiva Goldsman....

Maybe it depends on his sobriety levels or something, but clearly his screenwriting swings like a bi-polar wrecking ball in terms of quality or coherence.

I'll give you a snapshot of the massive incoherence. None of it is spoilers because you aren't going to go see this movie and even if you do there is no way I can spoil it worse than it spoils itself.

You have a baby set adrift in the ocean in a boat in the late 1800s, like a modern day Moses, who apparently grows up an orphan in New York City and a thief, named Peter Lake, working for a demon named Pearly Souls who is in a human form and speaks with a nearly indecipherable Irish brogue.  While the film is set in the early 1900s he works for Lucifer, played by Will Smith sporting a 2014 wardrobe, earring, and haircut.  When Pearly gets mad his face splits apart like the old Fantastic Four villain, The Molecule Man (see pic). 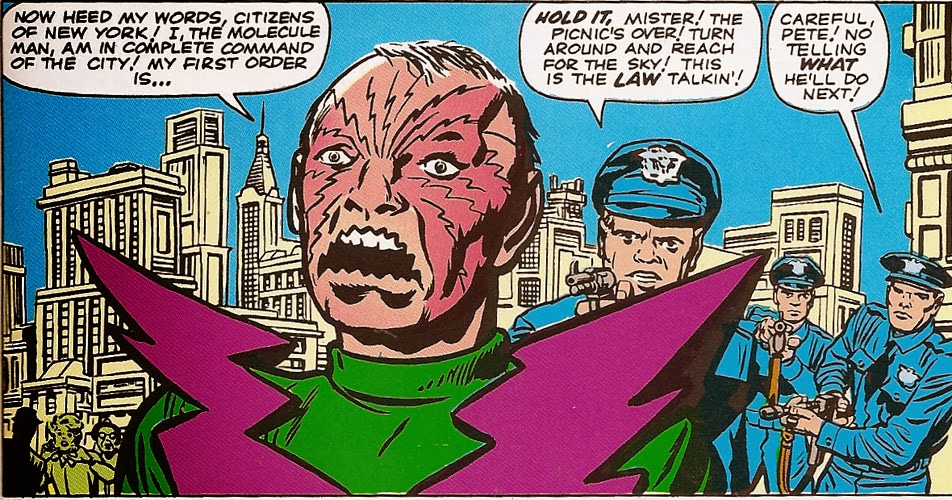 Apparently stars may not be giant balls of gas after all but really humans who die and become angels and choose their starlike wings to sit in the heavens. And humans all apparently have one "miracle" they are supposed to perform during their lifetime and Pearly's sole purpose on Earth is to mumble gibberish and stop these miracles from happening. Of course, we never really see any other miracles other than the miracle Peter's supposed to perform and Pearly is obsessed with stopping that miracle.

Oh yeah, and there's a spirit dog who magically appears as a glowing white Pegasus. I shit you not. It is a dog......that looks like a....horse......with angel wings.

And I learned that "consumption" (Tuberculosis) causes your body temperature to be so high that it melts snow and you have to sleep on a roof in a tent during winter so that you don't die. And if you breathe in and breathe out slowly and then quietly name some stars while breathing out that will lower your body temperature.

This thing is a mess. It's trying so hard to be meaningful and tell a magical story of a true love, lost love, and a Divine purpose that spans lifetimes. But what got lost was any ability to thread these pieces together into a story that could be followed, with themes that really connected on a deeper level, and most of all delved deeply into the characters so that we actually cared about what happened to them.

I sat there with a confused and furrowed brow from start to finish. That's never good for a film and is crushing for a film with the pedigree of this one.

Avoid at all costs.