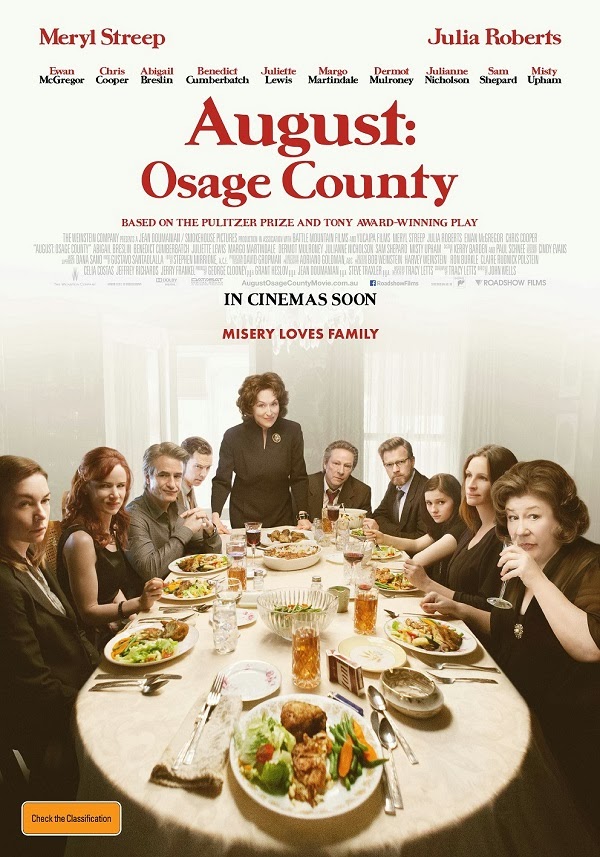 I mean, seriously, look at these names from the cast:
Meryl Streep, Julia Roberts, Ewan McGregor, Chris Cooper, Abigail Breslin, Benedict Cumberbatch, Juliette Lewis, Dermot Mulroney, Julianne Nicholson, and a glorified cameo by Sam Shepard (in a role I suspect isn't actually portrayed by anyone in the stage play -- but I could be wrong).

There really isn't a plot.  This is an opportunity for actors to dig into some seriously screwed up characters and play off each other.  The reason is that there's a lot of truth in the way the dysfunctional family dynamics play out.  While most viewers are not going to be dealing with a wholesale family from Hell like this one, there's enough here that nearly everyone will find some moments of self-identification -- and for some of us this will be somewhat painful if you force yourself to admit it.

Basically, you have a death in a family which brings all the estranged members of the family back together and in the house where they can all be emotionally abused once again by their foul, hateful, drug-addicted, mouth-cancered mother (played by Streep).  But especially, the relationship between Streep and the oldest of 3 daughters (played by Roberts), is what makes you sit in your seat and endure the endless variations of vomitous verbal and emotional abuse by this horrid women who I was wishing would die 15 minutes into the movie.

As I said, the movie is essentially pointless other than an excuse for actors to have a grand old time playing relentlessly depressed, angry, and wretchedly unhappy people who are emotionally stunted and feeling trapped in a fatalistic life defined by ever-deteriorating relationships and distorted concepts of love.  It's just plain depressing as shit.

And yet....every one of these actors brings their "A" game and takes this material and turns it into an acting class.  But, as I said, unless you yourself are planning to be an actor, the whole exercise seems utterly pointless as a piece of entertainment or art.  There's no spiritual truth here. There's no sense of better understanding the human condition. There does not appear to be any higher purpose to this other than tossing all the negative things about "family" into one arena and letting actors get their groove on with each other.  And because of that, it is an excellent movie.

If there's any message that I would say you should take away from this movie it would be this:  Remove toxic people from your life (whether family or not).  The earlier the better. And never look back. Don't let toxic people destroy you like every single person in this film is hopelessly ruined.

https://www.facebook.com/moviepocalypsenow
Posted by Keith Howell at 1:11 AM