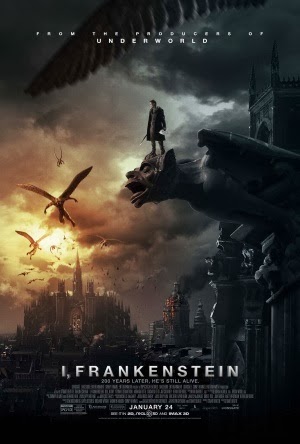 You know what you get when you take pile of stupid and add in a little stupid then wrap it in a stupid tortilla? You get this insipid, but modestly entertaining for its unintentional hilarity, film called I, FRANKENSTEIN.

Starring Aaron Eckhart as the titular hero and Bill Nighy as a Demon Prince (Nabirius, I think?), the film is written and directed by Stuart Beattie and purportedly based on a non-existent graphic novel of the same name by someone named K...evin Grevioux (who apparently has some connection to the UNDERWORLD film series). You know, I have a pretty good knowledge about the comics industry and even I couldn't find any evidence of this thing actually existing. The little bit I found mentioning it in an interview with this Grevioux, it sounds like he wrote a screenplay and then had a few pages drawn up comic book style to help give a visual component to the project as he tried to sell it to Hollywood producers. I don't know how in Hell that qualifies as being based on a graphic novel.

The movie stinks from the opening narration (with I'm guessing about 20 minutes of straight exposition) to the ending narration that concludes with Eckhart out Batman-ing Batman while growling out "I............Frankenstein."

Nothing makes sense in this mess. Even the concept makes no sense. Somehow we have demons in what look like human bodies, but arbitrarily they burn off the skin to reveal their rubber mask demon faces and then put the human skin on. So, they get to run around as humans, but for some reason the entire plot seems to revolve around having hundreds of thousands of reanimated human corpses for the demon horde to inhabit and for some reason those corpses are more desired than the human bodies they already have.

At the same time, we have angels here on Earth, but they disguise themselves as both gargoyles sometimes and humans sometimes. There's really no reason given other than that this is how the Archangel Michael set it up. When the angels are in their human form they even apparently have the ability to grow whiskers and beards, but yet Frankenstein himself doesn't seem to grow facial hair. I'm not sure what's up with that. Also, Bill Nighy's entire acting range in this film amounted to him cocking his right eyebrow whenever someone spoke to him. Not sure what's so evil about his right eyebrow or where that affectation came from but it was at least less damaging than Frankenstein's tendency to always enter and leave rooms by hurling himself through window glass...or sometimes walls.

I seriously don't know what was going on. I was kind of chuckling and giggling through the entire thing. It takes itself so damned seriously but it has the sensibility of, maybe, a 12 year-old writing what he thinks is the coolest comic book ever!

Please, only waste your money and time on this movie if you plan on getting completely toasted as you watch it. As bad as you expect it to be, I think it will exceed even your lowest expectations.

The turds are blossoming early this season.
Barely earns ★ out of  ★★★★★