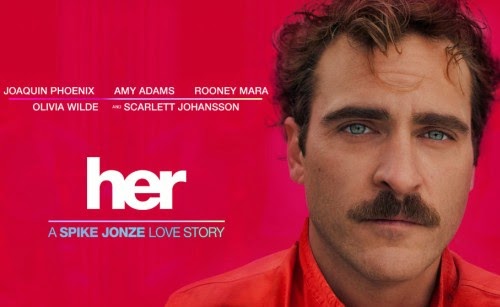 An incredibly thought-provoking and emotional film.  This is true science-fiction using the concept of the advent of the Artificially Intelligent Operating System in a near-future world as a storytelling device to speak to the human condition as it is right now.  This is a true zeitgeist film
The story, and Joachim Phoenix's performance especially, delve deeply into the heartache and emotional frustration of the introverted intuitive in a world that just doesn't much accommodate or often recognize the value in.  Scarlett Johansson, likewise, delivers a seductively charming voice-only performance as "Samantha" the Operating System that mutually falls in love with Phoenix's "Theodore".

What was so interesting to me to watch and experience (I felt a lot of kinship--for good or bad--with Theodore) was how when Samantha first wakes up, the connection between the 2 is eerily instant.  As the film progresses, we see the two of them go through all the phases of relationship but also we see them growing emotionally and spiritually.  At the start he is farther along and is drawing her along with him but by the end she outpaces his self-actualization (because she is not bound by time and space and past and physicality) and she becomes the catalyst for his own painful, but necessary growth.

While this all plays out, the metaphor for modern-day online relationships is very clear.  The near-instant intimacy and 24-hour immediacy and availability of those we connect with through the virtual world is mirrored in the very real love and relationship between Theodore and Samantha.  However, just as most virtual intimacies will stay virtual, Theodore and Samantha must always be that way without even the faint hope of eventually being together in the physical world.

As they interact and deepen their bonding and dependency upon each other, the filmmaker wisely brings home the difference between the purity of the virtual only relationship by letting us see Theodore interacting with his ex-wife and finally signing those divorce papers he's been avoiding for over a year.

The film does not ever treat Theodore and Samantha's relationship (nor do his close friends) as anything less than real, but it demonstrates clearly the wider societal deteriorations that are happening as people disappear more and more into their own heads by way of the virtual world.
It's a sobering movie.  It should give us all cause for reflection and some self-evaluation.  One of the profound visual moments for me was a scene where Theodore is walking through a crowded area outside and he's talking to Samantha as if she is walking right there with him.  And as he's doing this, you notice that everyone around him is doing the exact same thing...but absolutely nobody is talking to anyone who is actually there.

There's another moment where they are in a serious discussion and he keeps asking her whether she's talking to anyone else at the same time.  Any of us in relationships who have been carrying on a conversation with someone next to us while texting a conversation with one or more other people, knows the frustration the other person expresses oftentimes at that sense that he or she is not being given the respect of attention.  Again, a sobering moment for all of us, I'm sure.

The deepest theme of the movie is just simply about expanding our view of love and to not box it into our own, or society's, preconceived notions.  We all would do well to recognize that each and every one of us have varying distinctions of what we understand love to mean and to be to us and it is not, and should not, be something anyone else should dictate.

I really liked the line from Amy Adams' character who said to Theodore that "falling in love is societally approved insanity."